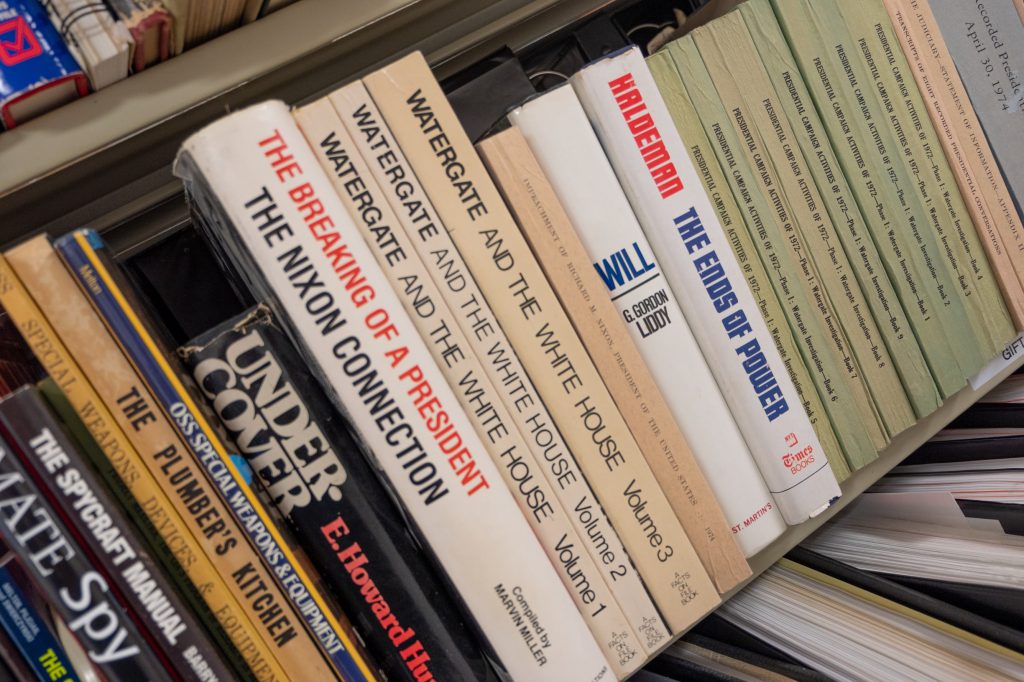 Photo: Books on Watergate, included in the 2,500 pieces of intelligence materials recently donated to The Citadel’s Department of Intelligence and Security Studies

It’s one of The Citadel’s largest and fastest-growing areas of study — and now the Department of Intelligence and Security Studies is preparing to host a major conference that will include a historic gathering of the FBI’s lead investigators for Watergate. In addition to that panel, the conference will also host a former FBI agent who recently published the book, Disrupt, Discredit, and Divide: How the New FBI Damages Democracy.

The full title of the two-day conference is “Legally Immoral Activity: Testing the Limits of Intelligence Collection.” It will focus on the legal, ethical, social, economic, historical and political aspects of a western democratic government’s ability to protect its citizens. The conference is being headed by one of America’s renowned experts on intelligence ethics, Citadel professor, author, editor and former FBI instructor, Jan Goldman, Ph.D.

The intelligence conference will be held on Tuesday, Feb. 11 and Wednesday, Feb. 12. It is expected to attract more than 300 attendees from a variety of intelligence professions. Conference registration is open to the public and can be accessed here.

Though most elements of the conference require paid registration, two evening events are free and open to the public.

On Feb. 11, Mike German, a former FBI undercover agent and whistleblower, will present what he describes as a troubling account of the modern FBI. He explains why he believes that, after 9/11, the FBI transformed from a law enforcement agency into an extremely secretive domestic intelligence agency. German will also take questions from the audience at his presentation.

German was an FBI agent for 16 years. He is now a fellow in New York University’s Brennan Center for Justice. His second book, Disrupt, Discredit, and Divide: How the New FBI Damages Democracy was published in September 2019.

The conference at The Citadel will reunite the FBI’s lead investigators for Watergate for the first time since the scandal. The panelists will share their memories and anecdotes from the inside of the FBI.

The panel was organized by Citadel intelligence professor and researcher, Melissa Graves, Ph.D.

“In doing research about the important roles these investigators played, I realized The Citadel had the opportunity to bring them all together for the first time all of these years later,” Graves said.

The Watergate panel will be Wednesday, Feb. 12, from 6 – 8:30 p.m. in Buyer Auditorium, in Mark Clark Hall. Seating will be first come, first served. The Citadel will livestream the panel on YouTube at this link.

For more information on the conference, or to register, click here.

Credentialed journalists are encouraged to cover the conference. Members of the media wishing to cover some or all of the conference are asked to contact email Kim Keelor, kkeelor@citadel.edu for registration, parking information and credentials by Feb. 7.