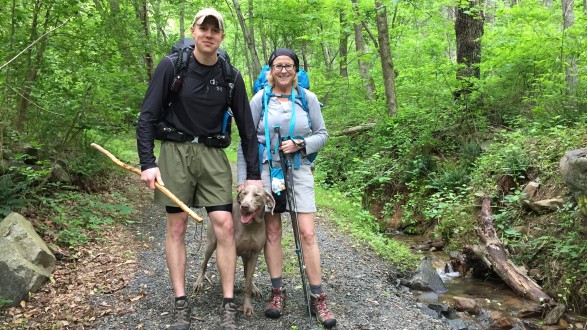 Photo: Lt. Matthew Kraft is seen here hiking with his mother, Roxanne Kraft in Virginia. (Courtesy of the Kraft family)

As seen in the Orange County Register, by Erika Ritchie

When a massive multi-agency aerial search in the High Sierras revealed heat coming from a snow-covered location along the Sierra High Route, family members of 1st Lt. Matthew Kraft were hopeful.

The infantry Marine, a platoon leader with the 1st Battalion/7th Marines at Twentynine Palms based out of Camp Pendleton, had undertaken a two-week backcountry ski trip along the 195-mile route beginning in the Inyo Forest near Lone Pine. The trip, which started Feb. 24 was to be done over 10 days, and Kraft, 24, notified family and the Marine Corps that he expected to arrive at Bridgeport March 4 or 5.

When Kraft didn’t arrive as planned, a search began.

Thermal imaging from low-flying aircraft picked up a heat spot. But upon closer inspection, search crews found it was a hibernating bear.

“That’s when I came to grips with it,” said Greg Kraft, Matthew’s father. “It’s also the day (March 15) the Marine Corps calls the date of death.”

Following that discovery — an effort that included Marines from the Mountain Warfare Training Center in Bridgeport and 13 agencies covering an area larger than the state of Rhode Island  — was designated a limited search because of backcountry snow instability, high winds and avalanche danger.

For five months Greg Kraft, his wife Roxanne and other family members have been waiting and hoping that Matthew’s body would be found.

“We are all broken,” Greg Kraft said. “We love that kid.”

Now, with most of the snow melted and the granite rocks exposed along the remote sub-alpine terrain, they are hopeful that a renewed search might put an end to their wait.

Sequoia & Kings Canyon National Parks officials have handed out fliers to hikers along the Sierra High Route identifying items Kraft might have had on the hike — an Otter iPhone case, Oakley sunglasses and a Katadyn water filtration system.

“I’d hope for boots on the ground, starting from the point of origin and then following the route,” said Greg Kraft. “I don’t want to put anyone in danger and I’ve been told most of it is rock. I would love for a team to start walking the path.”

Officials believe his son is most likely somewhere in the Sequoia & Kings Canyon National Parks, Greg Kraft said. The first six miles of the route went through Inyo County, with the parkland next. Matthew Kraft planned to end the route in Mono County, but officials don’t think he made it that far, his father said.

Greg Kraft is also hopeful the Marine Corps might get involved in the search again. He credits the Marines for their excellence and professionalism during the week-long effort earlier this year. Then, Marines from Bridgeport searched along the route and military aircraft flew “low and slow” so Kraft, if alive, could make contact.

“The Marine Corps cannot get involved unless they’re officially asked,” he said. “I’ve expressed my desire that they be asked.”

First Lt. Cameron Edinburgh said earlier this week that the Marine Corps will not give up on recovering Kraft.

“The limited search is still ongoing but there haven’t been any substantive clues,” he said, adding that a unit of Marines from the 1st Division is on standby if they are called to go up.

If a larger search is undertaken, Andrew Skurka, a backpacking guide familiar with the Sierra High Route, said now is the time, though the terrain is exposed to intense sun and afternoon thunderstorms are possible.

“The terrain is rocky, it’s basically a huge piece of granite with trees on top,” he said. “There are granite slabs that look like huge, tilted sidewalks and there are ledge systems that are steep granite steps that could be as high as five and 10 feet each. There are also refrigerator-sized boulders that have piled up.”

Finding Kraft could be complicated by the way the route changes in summer, Skurka said. A line that Kraft may have skied and hiked during wintertime, may not be the obvious route now. It also might depend on what actually happened to the Marine. If he was struck by an avalanche, he might be found but if he died from exposure and fell victim to the animals in the wilderness, it could be more difficult.

“It’s a needle in a haystack,” Skurka said, adding that in some past cases people weren’t found for years. “They may get lucky and a hiker could find him or they need to dedicate a huge amount of resources.”

Greg Kraft said he was unhappy when his son decided to undertake the hike because of the risk. But he said Matthew Kraft was bound and determined to do it and wanted to take advantage of getting two weeks off before pre-deployment. Matthew was an avid mountaineer and had hiked the Cohos Trail that goes from New Hampshire to Canada in 14 days. He hiked 40 peaks in the White Mountains and had plans to hike the Appalachian Trail.

“That kid was in terrific shape,” Greg Kraft said. “He was the guy to beat, his fellow Marines said.”

Greg Kraft said his son decided in 10th grade that he wanted to become a Marine while going to Kent School, a private college preparatory school in Connecticut. He graduated as an officer from the Citadel in 2016. Following his death, the Marine Corps posthumously promoted him to the rank of captain.

“He told me he wanted to join the Marines to surround himself with excellence,” his father said.