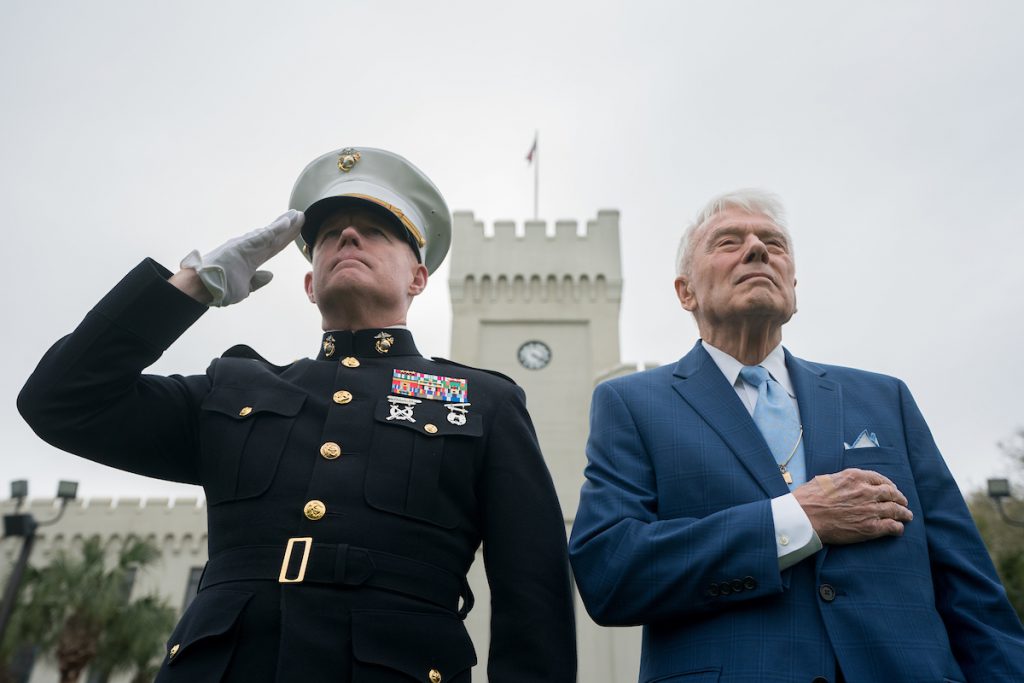 Photo above, left to right: Dr. John Palms, The Citadel Class of 1958, recipient of the Krause Center Award for Distinguished Service, Leadership and Ethics, stands beside The Citadel Commandant of Cadets, Col. Thomas J. Gordon, USMC (Ret.), during the national anthem, to take review of the South Carolina Corps of Cadets military parade dedicated to Palms on March 4, 2022.

Due to a pandemic-forced pause in the schedule, Dr. John M. Palms was recognized as the 2020 recipient of the Krause Center Award for Distinguished Service, Leadership and Ethics during the South Carolina Corps of Cadets’ dress parade on campus March 4, 2022.

“We are very excited to honor and recognize Dr. John Palms as the 2020 recipient of the Krause Center for Leadership & Ethics award for his service as a military officer, nuclear scientist, professor and President of the University of South Carolina which is unparalleled among the list of distinguished Citadel alumni,” said Bill Krause.

Palms was nominated for the 2020 award by The Citadel Foundation’s Chief Executive Officer and by the Dean for the Swain Family School of Science and Mathematics in 2019.

It is my distinct privilege to present the nomination of Dr. John M. Palms, ’58, for the Krause Center Award for Distinguished Service, Leadership and Ethics. An internationally recognized scientist and academician, national security advisor, eminent educator and public servant, distinguished Citadel graduate, and tireless advocate for humanitarian causes, Dr. Palms exemplifies, to the highest degree, the ethos of the Krause Award and the essence of servant leadership. His is the story of a life well-lived, a man running to win the prize for the upward calling.

According to Zimmerman’s nomination, Palms was born in the Netherlands and immigrated to the U.S. in 1951, becoming a citizen in 1956. He graduated with a degree in Physics from The Citadel as a distinguished Air Force ROTC cadet in 1958, receiving a commission into the U.S. Air Force (USAF). While on active duty with the USAF, Palms completed a master’s degree in physics, served as a nuclear weapons officer and taught physics at the Air Force Academy. After being honorably discharged in 1970, Palms completed a Ph.D. in physics and joined the faculty of Emory University, where he rose through the ranks, ultimately being appointed as the Charles Howard Chandler Professor of Radiation and Environmental Physics. Palms’ 23-year career at Emory was one of ever-increasing responsibility and leadership, culminating in his role as the university’s chief academic officer. This accumulated experience led to a two-year turn as president of Georgia State University, after which he accepted the invitation to become the 26th president of the University of South Carolina, a post which he served faithfully and fruitfully for 12 years.

To complete his remarkably successful career, he presided as director of governing boards for several national corporations. He has scholarships named in his honor at Purdue University and Linn State Technical College, as well as a science research facility bearing his name at the University of South Carolina.

According to Dowd’s letter of nomination, Palms has been awarded honorary doctoral degrees from several institutions of higher education, including The Citadel in 1980 and the University of South Carolina in 2002. He has received the Distinguished Alumni Award from two of the institutions from which he holds degrees—the University of New Mexico in 2003 and The Citadel in 2009. In 2002, he received the Order of the Palmetto, the highest honor bestowed by the State of South Carolina.

Read the full letter of nomination from the Dean of the Swain Family School of Science and Mathematics here.