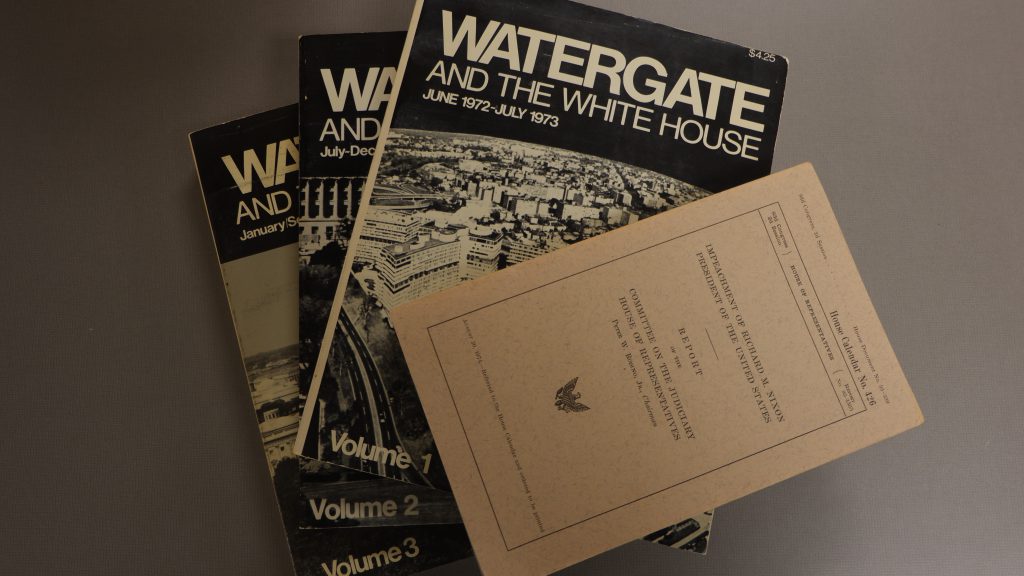 Photo: Watergate materials donated to The Citadel’s Dept. of Intelligence and Security Studies

Forty-seven years ago, five men broke into the Democratic National Committee headquarters at the Watergate Office Building in Washington, D.C.

The subsequent scandal and cover-up, known as Watergate, brought down President Richard M. Nixon and resulted in the indictment of 69 people, 48 of whom were found guilty of a crime.

Amid the current impeachment drama unfolding in Washington, The Citadel will bring together, for the first time, five of the FBI’s lead investigators in the Watergate scandal for a panel discussion in February.

The panel, organized by Citadel professor Melissa Graves, will be part of the military school’s Citadel Intelligence Ethics Conference, set for Feb. 11-12 and organized by The Citadel’s Department of Intelligence and Security Studies.

The Watergate panel and ethics conference are two examples of the increasing profile of The Citadel’s intelligence studies department, which offers one of the fastest growing majors at the school.

The Citadel recently received a donation of some 2,500 pieces of intelligence material to its library, and is the new home of the “International Journal of Intelligence and Counterintelligence,” the influential publication edited by Citadel professor Jan Goldman.

“The program we offer at The Citadel is the most varied and most extensive program in the country,” said Goldman, who has worked in intelligence for more than 25 years and taught at the National Intelligence University and the FBI Academy.

Much of Goldman’s work centers around ethics and intelligence. The February conference is called “Legally Immoral Activity: Testing the Limits of Intelligence Collection” and will examine those issues.

“That is what drove me into ethics 25 years ago,” Goldman said. “What we were doing with things like rendition and torture. How far are we willing to give up our principles and what this country has been founded on, for fear that we are about to be attached by terrorists? Where do we draw the line?”

The conference will included the Watergate panel. The scandal made stars of Washington Post reporters Bob Woodward and Carl Bernstein, but much of the FBI’s investigative work remains untold. Five FBI agents and Earl Silbert, assistant U.S. attorney for the District of Columbia during Watergate, will be together for the first time to discuss their work on the case.

“We hope to learn the role of the investigators in building the case,” Goldman said. “We’re looking to set the record straight on Watergate, and that’s a part of the greater issue of balancing personal civil liberties and how far we are willing to go to for national security.”

The donation of 2,500 books from Maj. Don Sweeny, a former Army intelligence reservist who worked on the House of Representatives’ Un-American Activities Committee, is another valuable addition to the intelligence department.

The seven pallets of material includes manuscripts, training manuals and government documents. The trove also included the first five issues of Goldman’s “International Journal of Intelligence and Counterintelligence,” which now will be produced at The Citadel with the help of cadets.

“The journal goes to government agencies and academic institutions everywhere, so The Citadel will be in everybody’s library through this journal,” Goldman said.

The Citadel has long supplied intelligence professionals for the military and for federal agencies, but there was not an intelligence major at the school until 2017 when the Intelligence and Security Studies department was founded by Dr. Carl Jensen, a former FBI special agent.

As of now, there are 330 freshman, sophomore and junior cadets majoring in intelligence and security studies. That number is expected to rise to more than 500 next year with the department’s first senior class.

“It’s one of the best professions you can get into, I believe,” Goldman said. “It has really grown in the post-9/11 era, and you can work in government or private industry. Businesses like Disney, MasterCard and Exxon all have their own intel units now, as do defense contractors and the government itself.”

For information on the 2020 Citadel Intelligence Ethics Conference and Watergate Panel, contact Goldman at jgoldma1@citadel.edu.