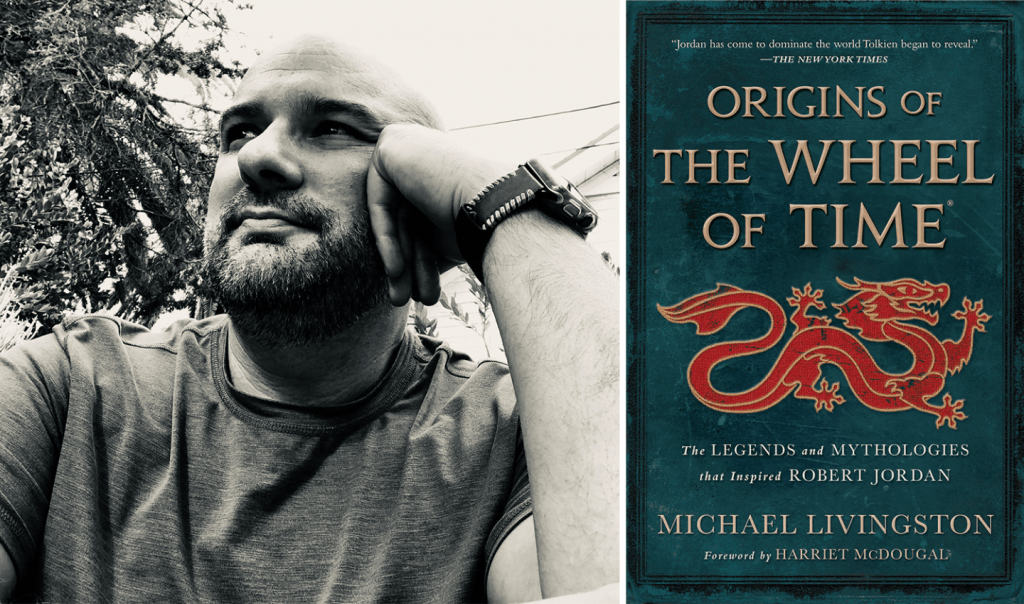 Note: Michael Livingston, Ph.D., (photo above) is an acclaimed academic interpreter of Robert Jordan’s literary accomplishment and legacy. Among his many other books are the Shards of Heaven trilogy of novels (published by Tor) and multiple award-winning studies of military history. At present, he serves as the Secretary-General for the United States Commission on Military History and teaches at The Citadel.

James Rigney Jr. — known as Robert Jordan, author of the Wheel of Time Series — graduated from The Citadel in 1974.

Tor Books is proud to announce the acquisition Origins of The Wheel of Time: The Legends and Mythologies that Inspired Robert Jordan by Michael Livingston, including a foreword by Harriet McDougal, by Robert Davis via Paul Stevens of the Donald Maass Literary Agency. The UK and Commonwealth rights were acquired by Bella Pagan, Publishing Director of Pan Macmillan’s Tor imprint.

Origins of The Wheel of Time by Michael Livingston will be available on November 8, 2022 from Tor Books.

“Jordan has come to dominate the world Tolkien began to reveal.” —The New York Times on The Wheel of Time® series

Explore never-before-seen insights into the Wheel of Time, including:

Take a deep dive into the real-world history and mythology that inspired the world of Robert Jordan’s The Wheel of Time®. Origins of The Wheel of Time is written by Michael Livingston, Secretary-General of the United States Commission on Military History and professor of medieval literature at The Citadel, with a Foreword by Harriet McDougal, Robert Jordan’s editor, widow, and executor of his estate.

This companion to the internationally bestselling series will delve into the creation of Robert Jordan’s masterpiece, drawing from interviews and an unprecedented examination of his unpublished notes. Michael Livingston tells the behind-the-scenes story of who Jordan was, how he worked, and why he holds such an important place in modern literature.

Origins of The Wheel of Time will provide exciting knowledge and insights to both new and longtime fans looking to either expand their understanding of the series or unearth the real-life influences that Jordan utilized in his world building—all in one, accessible text.

A letter to Readers from the Author, Michael Livingston

And I’m here to tell you that magic is real.

Let me prove it to you.

I was fifteen when I pedaled my bike—a black huffy with dirt tires—across a dusty Albuquerque prairie to reach my local bookshop. I had allowance and birthday money to spend, and a thirst that could only be quenched with a new book. I parked the bike, locked it up, and then perused the shelves for what seemed like hours. The store had these big comfy chairs, I remember—blue and welcoming—and whenever I found a potential new book I’d sit down with it and take the first chapter or two for a quick spin.

I found such a fantasy on the new release shelves. A big and fat one. The Eye of the World, by Robert Jordan. I picked it up. I liked the nifty cover it had on the outside and the cool map it had on the inside. I thought it had the hum of Tolkien.

So I sat down in one of those stuffed blue chairs and started to read.

In pages I was hooked. I spent every dime of the little coin I had and claimed my prize as my own. I tucked it into my backpack and pedaled home faster than I’d ever done before.

That magic stayed with me long after I devoured that first book. Every year I saved up to buy the latest volume in The Wheel of Time as soon as I could. I became—I am—one of its many millions of fans.

I read the books on the bus to high school. I read them in college and in graduate school, where I earned a PhD and became a specialist on the Middle Ages.

I became—I am—a serious academic. If I should read the chronicler Adam of Usk claiming there was a dragon haunting northern England 600 years ago, I will find a natural phenomenon to explain it. Because despite my love of fantasy literature—from Homer to Beowulf and Sir Gawain and the Green Knight, from Tolkien to Jordan and Nemisin—I know magic isn’t real.

After I graduated, I was asked to interview for a professorship at The Citadel, the Military College of South Carolina. The only thing I really knew about the place came from a single notice on the back of every book of The Wheel of Time in my library: Robert Jordan was a graduate of The Citadel.

I interviewed. I got the job. I moved to Charleston, and every day I walked past the iconic white tower on our campus. Every day, more and more, I wondered if that meant something.

In the fall of 2006, I was talking to The Citadel’s other Big Name literary alumnus, Pat Conroy, about starting student writing awards to honor him and James O. Rigney, Jr—the man the world knew as Robert Jordan. Pat suggested he could write Jim to help introduce me. Before I knew it I was exchanging emails with the man who’d given me The Wheel of Time.

I mentioned to Jim I was a fan. I told him at one point that I hoped to publish fiction myself one day, and that I planned to do it with Tor for no other reason than the fact that they’d given people like me his Wheel of Time. He said he looked forward to my success: “You have my best wishes on your rise (soon) to bestsellerdom,” he wrote me in early January 2007.

A few months later, he came to the first ceremony to bestow the student award named in his honor. He was already very ill, but he nevertheless cut a dashing figure with his lovely wife and legendary editor Harriet by his side. My script had me call out thanks to the English Department for their support. From the first row, Jim grumbled that he’d been an engineering graduate. It was awesome.

We shook hands. I thanked him for helping change my life. He was charming and kind and unforgettable.

On September 16, I was making photocopies for my class on Norse mythology when I heard that he’d died.

For a moment it felt as if the magic in the world had died, too.

Not long afterwards, the chair of my department called me into his office and told me that Jim had been elected into the South Carolina Academy of Authors. I was asked to give a speech at the ceremony, which would be held at The Citadel.

The event came in March. Harriet was in the front row and I couldn’t look at her as I talked. I was too afraid to cry.

But I got through. I sat down. A bit later, Harriet stood up to accept the award for her beloved Jim. She was gracious—by the Light, far more gracious than I could ever be—and then she publicly asked me if I’d come take part in a panel with her and Brandon Sanderson, who’d just been tapped to finish The Wheel of Time.

It might’ve felt like magic—in that moment I thought I could fly—but magic isn’t real.

Later, after that panel, I went to dinner with Harriet and Brandon and Team Jordan. They asked me if I wanted to come and tour Jim’s office sometime.

His writing desk was there when I visited: a beautiful old roll-top, where he’d spent countless hours building a world. So was his library and his armory and so much else that he used in the effort. At one point I looked up to see a saber-toothed tiger skull staring down at me and realized I was literally standing in the middle of the Tanchico Museum.

But, I forcibly reminded myself, magic isn’t real.

Not long after that I was invited down again. The Estate was going to auction off many of the weapons in his armory to raise money for medical research. They wanted me to pick one first, and they left me alone in his office to decide.

I remember staring at his desk, wanting to sit down but too afraid to do so. I felt a sudden impulse to turn around, and when I did I found my hands reaching past far nicer looking pieces to pick up an otherwise unremarkable katana leaning against the wall. I don’t know why. When I unsheathed it, I saw that it had a dragon etched into its sweeping blade.

I keep the sword in my campus office, and it was there, in later years, that one of my veteran students saw it. Turns out, he’d been deployed in Iraq when his father-in-law, an antiques dealer, had sold that very blade to Jim. He had pictures of the event.

I wrote The Shards of Heaven, a trilogy of historical fantasy novels, and achieved that life-long dream when Tor published them. And though they hardly achieved bestsellerdom, just seeing the books come out was more than I ever thought possible. It felt like a promise fulfilled, like the result of some secret wind pushing at my back.

I continued to give talks on Jim’s literary impact over the years. Out of love. Out of a feeling of gratitude. Not long ago, I was invited to a get-together with Team Jordan, and out of the blue Harriet stunned me by gifting me that saber-toothed tiger skull I’d seen in Jim’s office on that first visit.

Over this past summer, the administration here at The Citadel wrote me with the news that Harriet had donated Jim’s roll-top desk to the school. She’d asked only that it be used and not simply set in a corner.

Days after my eager agreement to have that desk moved into my office—the one where he wrote those books, the one I’d been too afraid to sit at before—Tor offered me a contract to write a book about the real world in the Wheel of Time.

Somehow, that kid who pedaled home through the New Mexican dirt with The Eye of the World in his backpack would write his own book about The Wheel of Time… at Jim’s own desk, beneath his dragon-marked sword and his tiger skull, looking out at a white tower amid peaceful trees in a city between two rivers.

It might’ve taken a bit for me to get the hint, Jim, but I don’t think I can deny it any longer. So thank you. For this. For everything. I promise I’ll do everything I can to make Origins of The Wheel of Time worthy of the Light of your memory.

The Wheel weaves as the Wheel wills.

I pray it weaves through me. 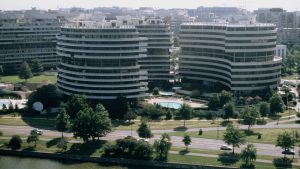