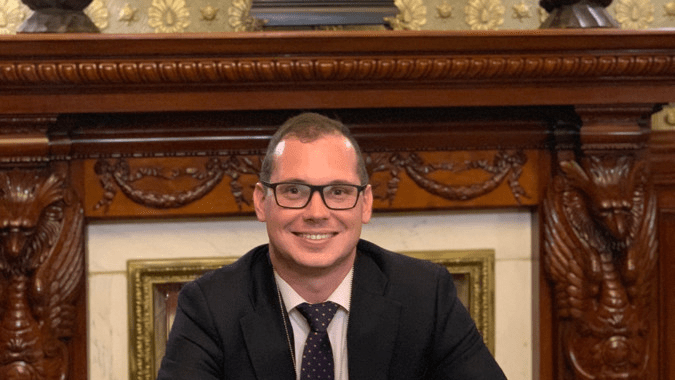 And as a former officer in the volunteer-only South Carolina State Guard, he’s always felt compelled to serve the community.

So when Bezjian, a professor at The Citadel, was told he was accepted into the Army’s new project to revive a historic unit to safeguard cultural icons, artwork and artifacts, he felt like it was the answer to a lifelong calling.

“It’s so vitally important to preserve as much of history as possible so that the narrative of history doesn’t get lost or twisted in the process,” Bezjian said. “Once this stuff is gone, it’s gone.”

The Pentagon unveiled the revival of the Monuments, Fine Arts and Archives program this fall during an announcement at the Smithsonian Institution in Washington, D.C.

It mirrors one of the most prolific World War II units — the team of history, art and culture experts dubbed the “Monuments Men” that saved European icons taken by Nazi Germany.

The unit of more than 300 people was active for eight years during and after the war. They tracked down an estimated 4 million pieces of valuables, artwork and other trinkets that were taken or stashed by German soldiers. Two members of the group died during their mission.

Bezjian, a business professor at the military college based in downtown Charleston, specializes in teaching students about entrepreneurship and cultural preservation.

He received word he would be commissioned in early March, before the global pandemic hit. He will become a captain in the Army Reserves along with more than 30 other academics and military officers.

“They wanted to create this group of military government specialists, such as people trained in preservation, curation and protection techniques, to get them commissioned as the new monuments officers unit,” Bezjian said.

The new group has a goal similar to the original unit and is composed of commissioned officers from the Army Reserve as well as civilians outside the armed forces with certain academic specializations. They’ll be based at the Army Civil Affairs and Psychological Operations Command at Fort Bragg, N.C.

Bombs can level ancient architecture, valuable military equipment from an important mission can be set aside as scrap, and priceless artwork can become worthless after a single firefight.

The revamped Monuments Men will help war-torn nations preserve their cultural artifacts. Additionally, the new group will also aim to inform the Department of Defense and allies which significant sites should be spared from airstrikes and invasions. It also hopes to curb looting.

It’s an important mission for the Army and the Smithsonian.

“In conflict, the destruction of monuments and the looting of art are not only about the loss of material things, but also about the erasure of history, knowledge and a people’s identity,” Richard Kurin, an anthropologist at the Smithsonian, said during the announcement that the unit was being renewed.

The team will not be deployed full time, but will be assigned to tasks as they arise. It could include going to war zones.

Bezjian has been working to inspire a love for history and preservation among the Corps of Cadets.

One piece The Citadel students preserved was an Army-issued M1 steel helmet worn by Walker Kirtland Hancock, one of the original Monuments Men team members.

Bezjian will continue to keep his job at The Citadel while working with the Monuments Men unit, and hopes to inspire students into military careers that follow in his culture-protection footprints.

“My goal is to eventually create a training program at The Citadel where we can directly commission students into this unit,” Bezjian said. “I want to create a pipeline for students to these types of preservation jobs.”

In the NewsInnovation LabManagement & Entrepreneurship