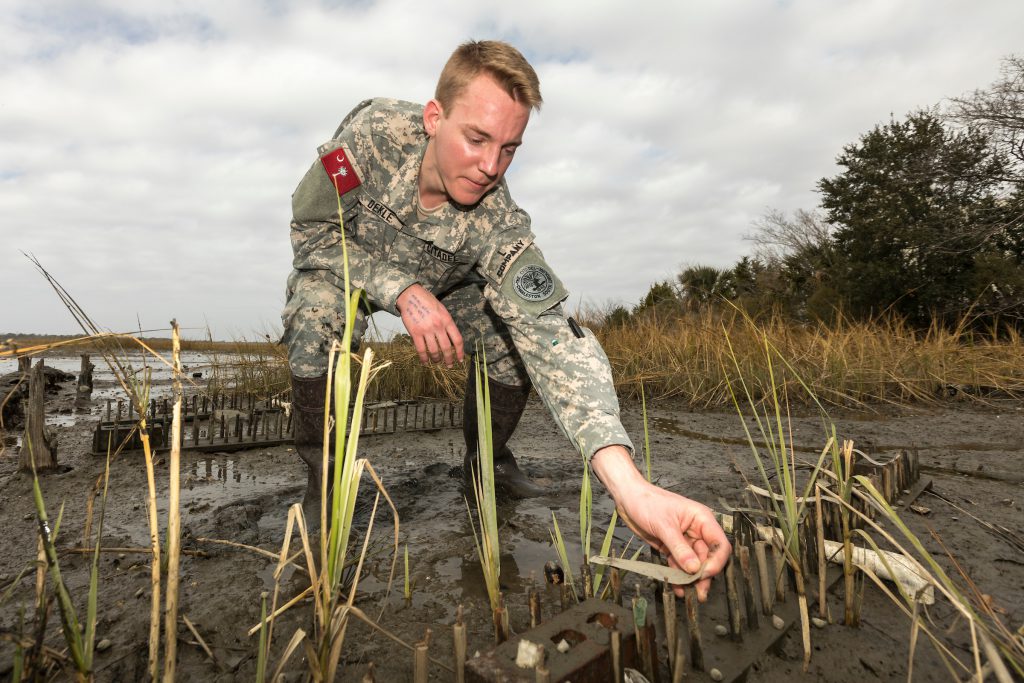 As seen in The Post and Courier
By Chloe Johnson

A new study by a Citadel professor shows that some plant-derived plastics, meant to replace traditional fossil fuel products, may present their own problems for the environment.

The research, led by Biology Department Chair John Weinstein, was conducted on the banks of the Ashley River. It’s one of the few field studies documenting how plastics break down. While there are many estimates of the time it takes for plastic bottles, bags or cups to fully disintegrate, there is relatively little real-world observation of this debris disintegrating.

But in testing several conventional and plant-derived plastics, Weinstein observed something surprising: the slowest decomposer was a material made from corn.

The compound, called polylactic acid, or PLA, is one of the most common bio-plastics used today. But it’s also the most resistant to breaking down, “with almost no change observed between the control and 32-week sample,” according to Weinstein’s study.

The experiment, conducted in 2017, involved attaching small strips of the various plastics to a wooden board, and placing the device in salt marsh along the Ashley. Samples were examined and compared with unexposed pieces of the same plastics after four, eight, 16 and 32 weeks outside. The resulting paper was published in November in the journal Marine Pollution Bulletin.

The intent, Weinstein said, was to simulate a likely scenario — what would happen to plastic trash that ends up entangled in a marsh?

“It really was meant to be like a backyard study and really, the Ashley River was like the backyard of The Citadel,” Weinstein said.

The study included seven materials, all chosen because Weinstein said they were “readily available” to consumers. Two were classified as biodegradable, and two were bio-based, like PLA. Researchers compared these bio-plastics with three more conventional materials, like the HDPE used in jugs of laundry detergent, or foamed polystyrene commonly known as Styrofoam.

Sangwon Suh, an industrial ecologist at the University of California at Santa Barbara, said Weinstein’s study “confirms our understanding” of PLA’s persistence in the environment.

Part of the issue is the material is designed for industrial composters, facilities that use temperatures in excess of 120 degrees to break down waste. Weinstein said there are only about 100 of these composters in the United States, begging the question of whether someone who chooses a PLA product as a green option would actually be able to dispose of it properly.

Oil-based plastics, by contrast, are degraded by the sun’s UV rays.

Plastic decomposition rates also vary widely depending on the environment. Suh recently helped conduct a review of existing scientific work on plastic decomposition. A PET bottle, like the kind that might be filled with soda, takes an estimated 2,500 years to decompose halfway if buried in a landfill, but just 2.3 years if exposed to sun and water while floating in the ocean, Suh said.

Still, Suh acknowledged that there’s a dearth of studies actually observing these breakdowns in the real world, something Weinstein’s work addresses.

The question, however, is whether it’s a good thing at all to find plastics that break down quickly. While larger debris can entangle sea creatures, decomposing plastics shed tiny particles that spread throughout the water and air.

Weinstein’s own past work has found that shrimp will readily eat these microplastic pieces, introducing them into the food chain.

“It’s a real challenge to know what the right balance is between degradability and persistence,” Hahn said.

It’s still unclear what the health effects are of these invisible-to-the-eye plastics, which sometimes attach to other pollutants in the environment.

Hahn said he’s at the beginning of work now to suss out how these particles are taken up by the animals that consume them, and whether some are tiny enough to infiltrate the circulatory system. Some animals have been observed expelling the plastics that they eat.

As for Weinstein, he said his next focus is to estimate how much extra litter has been released in the area from protective equipment like gloves and masks used and discarded during the coronavirus pandemic.

Previously, Weinstein has estimated that 7½ tons of plastic trash was floating in Charleston Harbor.