February 4, 2019 Alumni Featured In The News 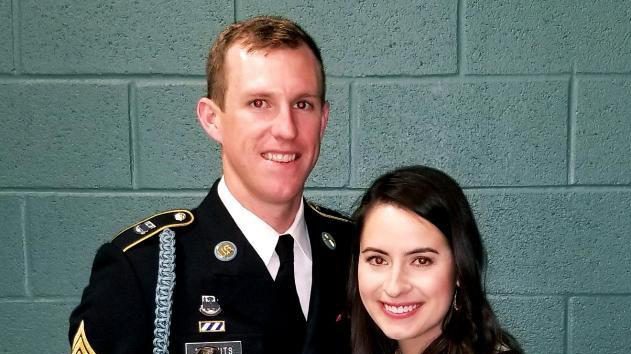 Photo: Sgt. James Spencer McCants and his fiancé Melissa Harden pose for a picture after he is awarded the coveted “Best Warrior Non-Commissioned Officer” award Wednesday during a ceremony conducted by the S.C. National Guard during their annual Best Warrior Competition. (Courtesy: The Aiken Standard)

As seen in The Aiken Standard, by Tripp Girardeau

An Aiken man took home a coveted award at a ceremony conducted by the South Carolina National Guard on Wednesday in Eastover.

The annual Best Warrior Competition awards ceremony is held each year by the S.C. National Guard to recognize the best of the best in their annual five-day event designed to test soldiers’ mental and physical stamina, according to a release.

McCants grew up in Aiken, graduating from Aiken High School, only finally leaving to attend college at The Citadel.

He has been in the National Guard for seven years and, over all that time, never competed in the Best Warrior Competition.

“I decided it would be a good way to occupy my time and keep myself physically fit and mentally prepared,” McCants said.

The Best Warrior Competition was held between Jan. 26-30 at the McCrady Training Center at Fort Jackson. The competition consists  of a variety of mental and physical tests, aimed at pushing soldiers to their limits, the release states.

“I trained by just doing my regular routine and adding in a little extra work at night sometimes,” he said. “I really did not think I was going to win. I just thought it would be a good opportunity for me and let me do something I’d never done before.”

McCants explained he felt the competition did have its difficult stages, but personally felt there was one aspect that he will remember for making it truly tough for him.

“We had to sleep outside every night, and I don’t know how cold it was in Aiken, but, by God, it was really cold in Columbia at night,” he said. “After a long, trying day all you want to do is get into a comfortable, warm bed, but we had to sleep outside in tents. Plus, this was something they added to the event. I don’t think they’ve always had the participants sleep outside each night.”

However, once it was over, he said he found sleeping outside during the event to be a good experience for him and the other soldiers participating.

“I love it. I’ve always loved camping and, after it was all over, I said I thought adding the sleeping situation was something they should continue, keeping as part of the competition.”

The two award winners were announced on the final day of the event on Wednesday during the ceremony, which McCants said “really surprised” him when they announced that he had won the award.

“It’s crazy man – I really just wanted to get through it,” he said. “Winning was an amazing feeling though and I’m really glad I did it. It certainly was an experience like no other.”

McCants’ family and his fiancé were present for the award ceremony Wednesday.

“I’m just so proud of the boy,” said Clark McCants, his father. “My son’s a humble guy who doesn’t like to brag on himself, but I really think this is an awesome achievement, which very few can say they have. He should be so proud of himself, because me and all of his family couldn’t be more proud.”

“Take this back to your commands and tell them what it takes to be the best warrior,” said Command Sgt. Maj. Russ Vickery, South Carolina National Guard state Command Sergeant Major during the ceremony.