A new party gets started at The Citadel 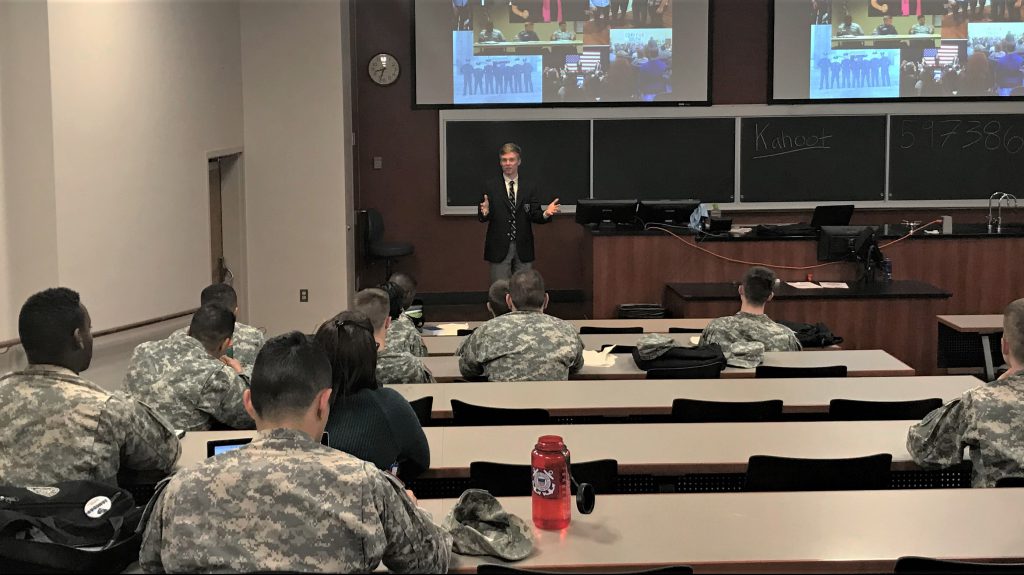 One of The Citadel’s newest clubs for cadets isn’t quite a year old. But the cadets involved with The Citadel College Democrats (CCD) club have spent that time making a big impact on the community and campus.

During the first general meeting of the semester, CCD hosted S.C. Sen. Marlon Kimpson and two members of the Charleston Peninsula Democrats.

“Senator Kimpson shared insight into his experiences in the statehouse and implored the members to take action for the things they believe in,” said Matthew Miller, president of CCD. “Cadets were extremely grateful to hear about all the work that is being done by our leaders and look forward to an exciting election cycle. With many new faces and growing excitement, this meeting helped affirm how quick the CCD has made an impact in the community and on campus.”

Miller founded the club in the fall of 2018, alongside eight other cadets. During the rest of the semester, CCD plans to take a trip to the South Carolina statehouse, attend events with the College of Charleston College Democrats, work with the Charleston County Democratic Party and host members of Congress on campus.

In February, members of CCD participated in a first-of-its-kind, tri-partisan debate.

Looking for common ground within the Corps of Cadets

It’s a tense time in America, politically speaking. But some members of the South Carolina Corps of Cadets are findings unprecedented ways to discuss the issues important to them.

Nine cadets participated in a tri-partisan debate, hosted by The Brigadier, the campus newspaper. Delegates from the cadet Democrat, Libertarian and Republican clubs all came together to talk in a civilized and respectful forum.

The event lasted an hour, with a couple dozen cadets in attendance. Debate questions ranged from immigration, criminal justice and foreign policy. Cadets were applauded on Facebook by people watching online with comments like, “I am incredibly grateful for the professionalism shown thus far,” and “I’m impressed and glad I stumbled upon it.”

The spirit of the event was defined by the responses to the question: “What is your view on the growing political divide, not just in the US but in the world, and how should we try to bridge the gap?”

On the Libertarian side, Cadet William Westmoreland said, “Every time the government tries to fix something it only gets worse, as we’ve stated so many times. I think it’s an issue we need to work on together outside of government. We need to come together through forums like we’re doing right now to see what we can do together without the government there to throw endless money at it and mess it up.”

Speaking for the Republicans, Cadet Allen Huff said, “What we’re seeing here is proof that tri-partisanship can work. While all of us have a diverse view of the political spectrum, we all have agreed to sit down and at the end of the day we’re going to work toward the same goal to make our school better and to make each other better. That’s the kind of behavior that I think society should adopt.”

For the Democrats, Cadet Matthew Miller said, “Our generation is starting to realize that not every single news source is reliable. So I have some faith, at least within our generation, that we are going to take a more critical approach to where our news comes from so that we’re not falling into the fallible issues of relying on everything we see on social media.”

The Cadets who participated in the debate are: