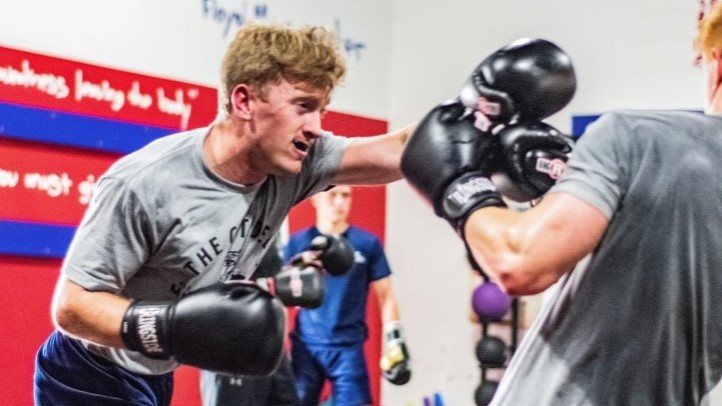 As seen in Charleston Mercury, by Josh Baxa

Dating back to the 1940s, boxing at The Citadel has always been a cherished tradition that has been used to mold cadets into confident soldiers and citizen leaders. Citadel graduate of 1952 and future Carolina Hall of Famer Harry Hitopoulus was one of the first roughneck champions that the school produced, lettering in the sport for three consecutive years during his tenure at The Citadel. After his graduation, he returned to Rutledge Avenue once again — but this time to coach a team that was, at the time, at best mediocre. To give the boys additional training inside the ring, Coach Hitopoulus recruited Michael Golemis as a sparring partner, a local boxing star who fought for the College of Charleston. Golemis was soon invited to coach alongside Hitopoulus on The Citadel team, solidifying a club that would soon climb the ranks of national recognition.

From 1980 to 2007, Coach Hitopoulus and Golemis created an elite program that routinely won tournaments at the Naval Academy, The University of Kentucky, UNLV, Shippensburg and VMI among many other universities. After Coach Hitopoulus’ passing in 2007, Coach Golemis continued the club’s legacy producing three All Americans — Sam Greenwood, Ronal Clifton and Israel Cordova — until the sport was defunded in 2009 by the school’s sporting administration, citing health reasons. Twelve years later, in the spring semester of 2021, the sport was reintroduced on campus with Coach Golemis once again at the helm — this time completely self-funded through fundraisers and donations.

At the first informational meeting, over 240 cadets attended online and in person. Although this isn’t the first time that the club has attempted to restart on campus since funding was cut in 2009, this writer, also the club’s student president, thinks that this time feels different. The momentum and support that we have found behind this club after just one semester feels surreal. It’s obvious, to me at least, that The Citadel finally wants boxing back on campus — I just hope that the administration in Deas Hall is listening. Deas Hall, the school’s sporting administration office, has yet to recognize the Boxing Club as an official sports club (like rugby or sailing), forcing The Citadel Boxing Club to operate under the status of an “academic club” that receives zero travel funding or coach stipends from the school’s athletic budget. This hasn’t seemed to stop the club from moving forward, however.

In a fundraiser to promote an end-of-semester spring match, the club raised more than $7,000 and went 4-0 on the night of the event. Although boxing at The Citadel certainly has had a storied past, only time will tell whether the future holds as much promise for the sport. Coach Golemis certainly thinks so. “I would say this is the new beginning of something that began back in the 1940s. Boxing at The Citadel Military College is alive. So here we go again.” Visit the club’s website, citadelboxing.club, for more information on The Citadel Boxing Club or how to get involved.

In the NewsSouth Carolina Corps of CadetsThe Citadel Boxing Club