Citadel Announces Graduation Speakers for the Class of 2019 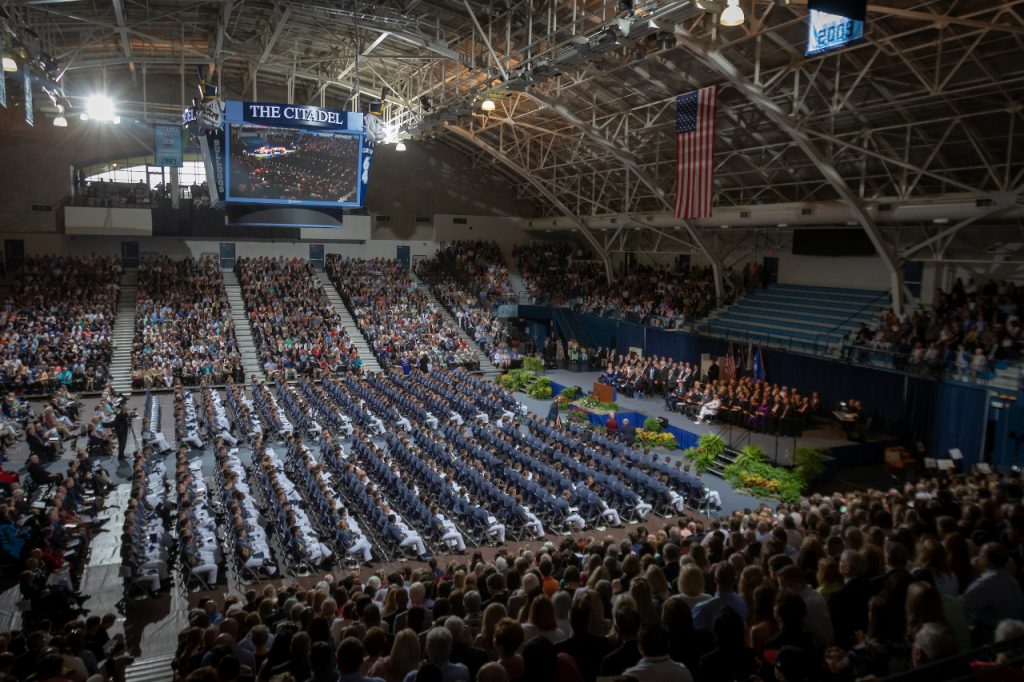 Two of the United States’ most influential leaders, Lt. Gen. Kenneth Franklin McKenzie, Jr., and the Honorable Robert Wilkie, will give the addresses at The Citadel’s two commencement ceremonies on May 4. McKenzie, who most recently served as Director of the Joint Staff, the Pentagon, Washington D.C. will address the South Carolina Corps of Cadets graduates. Wilkie, the Secretary of Veterans Affairs, will address The Citadel Graduate College Class of 2019.

More than 500 cadets will graduate during the 9 a.m. ceremony for the Corps, and more than 300 veteran, evening undergraduate and graduate students from The Citadel Graduate College are expected to walk the stage to accept their diplomas at their 3:30 p.m. commencement ceremony.

Lt. Gen. Kenneth F. McKenzie, Jr. has been confirmed by the U.S. Senate for promotion to four-star general and will assume command of U.S. Central Command  on March 28, 2019.

McKenzie is a native of Birmingham, Alabama. He graduated from The Citadel in 1979, earning a commission into the U.S. Marine Corps and training as an infantry officer. McKenzie has commanded at the platoon, company, battalion, Marine Expeditionary Unit (MEU), and component levels. As a lieutenant colonel, he commanded First Battalion, Sixth Marines. As the commanding officer of the 22d MEU, he led combat deployments to Afghanistan in 2004 and Iraq in 2005-06.

In 2006-07, McKenzie was the Military Secretary to the 33rd and 34th Commandants of the Marine Corps. In 2007, upon promotion to brigadier general, he served on the Joint Staff as Deputy Director of Operations within the National Military Command Center. In June 2008, McKenzie was selected by the Chairman of the Joint Chiefs of Staff to be the director of the administration transition team. In this capacity, he coordinated the efforts of the Joint Staff and the combatant commands in preparing for and executing a wartime transition of administrators.

In 2009, McKenzie reported to the International Security Assistance Force in Kabul, Afghanistan, to serve as the deputy to the Deputy Chief of Staff for Stability. Upon his return from Afghanistan, he was assigned as the Director, Strategy, Plans, and Policy (J-5) for the U.S. Central Command. In 2012, McKenzie reported to Headquarters Marine Corps to serve as the Marine Corps representative to the Quadrennial Defense Review. In 2014, McKenzie was promoted to lieutenant general and assumed command of U.S. Marine Corps Forces, Central Command. In October 2015, McKenzie became the Director, J-5, Strategic Plans and Policy for the Joint Staff. In 2017, he was named the Director of the Joint Staff.

McKenzie is an honor graduate of the Armor Officer Advanced Course, Marine Corps Command and Staff College, and the School of Advanced Warfighting. He was named a CMC Fellow in 1999, and served as a senior military fellow within the Institute for National Strategic Studies at the National Defense University. He earned a Master’s degree from The Citadel in Teaching with a concentration in history.

The South Carolina Corps of Cadets 2019 commencement takes place at 9 a.m. in McAlister Field House on campus, with doors opening one hour early. Tickets are required for the main ceremony.  A livestream of the event will be broadcast in Grimsley Hall for those arriving late or those without tickets. For more information, please visit The Citadel website here.

The Honorable Robert Wilkie is the 10th Secretary of Veterans Affairs, sworn into office in July 2018, after serving as the acting secretary for almost four months. Previously, Wilkie served as Undersecretary of Defense for Personnel and Readiness—the principal advisor to the secretary and deputy secretary of defense for total force management as it relates to readiness, National Guard and Reserve component affairs, health affairs, training, and personnel requirements and management, including equal opportunity, morale, welfare, recreation, and the quality of life for military families.

Wilkie is an officer in the United States Air Force Reserve assigned to the Office of the Chief of Staff. Before joining the Air Force, he served in the United States Navy Reserve with the Joint Forces Intelligence Command, Naval Special Warfare Group Two, and the Office of Naval Intelligence. He has more than 20 years of federal service at the national and international levels.

During the George W. Bush administration, Wilkie served Donald Rumsfeld and Robert Gates as Assistant Secretary of Defense. He was Special Assistant to the President for National Security Affairs and a senior director of the National Security Council under Condoleezza Rice, Ph.D.

Wilkie also has experience in Congress, including recent service as senior advisor to Senator Thom Tillis and as counsel and advisor on international security affairs to the Senate Majority Leader Trent Lott.  Wilkie shepherded the Senate confirmation processes for James Mattis, Robert Gates, and Admiral Mike Mullen, and he was responsible for the preparation of Gen. David Petraeus and Ambassador Ryan Croker for their multiple appearances before the Congress in defense of the Iraqi surge.

Wilkie was Vice President for Strategic Programs for CH2M HILL, one of the world’s largest engineering and program management firms (since purchased by Jacobs). There, he held program management and advisory assignments related to the London 2012 Summer Olympics and the reorganization of the United Kingdom Ministry of Defense Supply and Logistics System (DE&S).

Wilkie holds an honors degree from Wake Forest University, a juris doctor from Loyola University College of Law, a Master of Laws in International and Comparative Law from Georgetown University, and a Masters in Strategic Studies from the U.S. Army War College. A graduate of the College of Naval Command and Staff, Air Command and Staff College and the Joint Forces Staff College, Wilkie has published articles in the Naval War College Review, Parameters, Armed Forces Journal International, Air and Space Power Journal, and Proceedings. He holds personal and unit decorations, as well as the Defense Distinguished Public Service Medal, the highest non-career civilian award of the department.