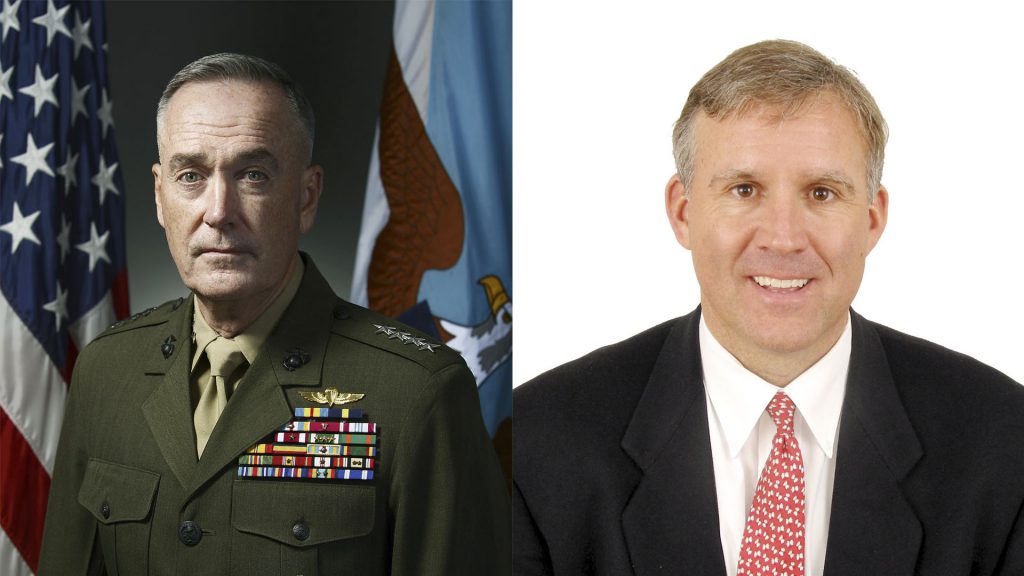 The South Carolina Corps of Cadets Class of 2020 commencement will take place at 9 a.m., Saturday May 9, at McAlister Field House. About 500 cadet graduates and veteran day students will be addressed by this year’s commencement speaker, Gen. Joseph F. Dunford, Jr., USMC (Ret.).

Dunford served as the 19th Chairman of the Joint Chiefs of Staff, the nation’s highest-ranking military officer, and the principal military adviser to the President, Secretary of Defense, and National Security Council from 2015 – 2019.

A native of Boston, Massachusetts, Dunford graduated from Saint Michael’s College and was commissioned in 1977. He has served as an infantry officer at all levels, to include command of 2nd Battalion, 6th Marines, and command of the 5th Marine Regiment during Operation IRAQI FREEDOM.

Dunford’s Joint assignments include duty as the Executive Assistant to the Vice Chairman of the Joint Chiefs of Staff, Chief of the Global and Multilateral Affairs Division (J-5), and Vice Director for Operations on the Joint Staff (J-3).

A graduate of the U.S. Army Ranger School, Marine Corps Amphibious Warfare School, and the U.S. Army War College, Dunford also earned master’s degrees in Government from Georgetown University and in International Relations from the Fletcher School of Law and Diplomacy.

The Citadel Graduate College commencement exercises will take place at 3:30 p.m. on Saturday, May 9 in McAlister Field House. The graduation speaker will be Anderson “Andy” D. Warlick, the chairman and CEO of Parkdale Inc.

Warlick is considered one of the most innovative leaders in the textile industry, particularly with regard to sustainability and environmental responsibility, including Parkdale’s patent-pending process that allows polyester and other synthetic materials to biodegrade like natural materials, resulting in less oceanic pollution. Parkdale is the world’s largest independent producer of cotton and cotton-blend yarns and cotton consumer products for the health and beauty industry, and owner of the U.S. Cotton brand.

Warlick joined Parkdale Mills in 1984 and became president and CEO in 2001. Warlick is also part owner of the NBA basketball team, the Charlotte Hornets. He currently serves on the boards of Parkdale Inc., Kent Manufacturing, Inman Mills, the North Carolina Textile Foundation, and is lead director for SWM, Inc. (publicly traded NYSE).

Warlick graduated from The Citadel in 1979 with a degree in business administration. He has served his alma mater in numerous capacities over the years, and is currently a member of The Citadel Foundation Board of Directors, a position he has held since 2013. In 2009, The Citadel honored Warwick an honorary degree of Doctor of Business Administration for his optimism, leadership, and vision in service to his community and his alma mater.

Warlick is also a graduate of Harvard Business School’s Program for Management Development and of the National Cotton Council’s Leadership Program.

Some of his awards include:

Warlick and his wife Pam reside in his hometown of Gastonia, North Carolina where Parkdale is headquartered. They have two adult children, Collins and Davis.