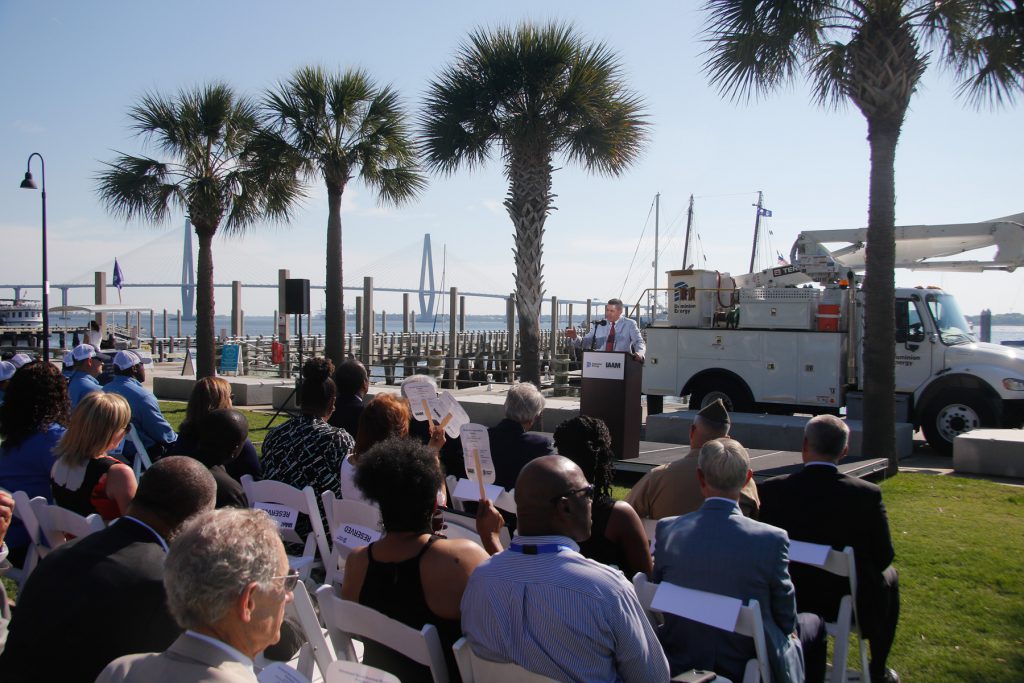 Keller Kissam, president of electric operations for Dominion Energy and a member of The Citadel Class of 1988, stood before a crowd gathered at the future site of the International African American Museum (IAAM) in Charleston to help lead the presentation ceremony for a momentous gift being awarded to the project.

“This is a special site. The seeds that were sown here were sown in bondage and slavery, but they were fertilized and nurtured with blood, sweat and tears,” Kissam said. “And today, we are the beneficiaries of a society of all of those people who let their suffering become endurance and their endurance become hope. And now we celebrate with great joy as those seeds blossom into full bloom for not just this city, not just this state, but for this nation and the world.”

Standing before the sparkling backdrop of Charleston Harbor, the former regimental commander of the South Carolina Corps of Cadets hosted the event that featured the presentation of a $2.5 million pledge of support for the museum from Dominion Energy. Fellow Citadel alumnus and professor, former Charleston major and civil rights activist, Joseph P. Riley, Jr., ’64, accepted the gift from the president of Dominion Energy’s Southeast Energy Group, along with IAAM CEO.

Riley, who recently taught a course at The Citadel called The Why and the How: The Making of the International African American Museum, was instrumental in launching the effort to raise funds for the IAAM in 2000 and has continued spearheading the effort with other city and community leaders to bring the vision to reality.

“The International African American Museum will boldly tell the full story of the enslaved people of America and their evolution to modern day, with Charleston having been a part of almost every chapter. It will also celebrate the beauty, creativity and intelligence of those people in a manner, which in the end, allows the visitor to leave feeling a sense of jubilance and hope,” Riley said at the beginning of his course about the IAAM.

Construction on the museum is anticipated to begin in the fall at the site near the Maritime Center that was once called Gadsden’s Wharf. According to the IAAM website, more enslaved African captives arrived in the U.S. and were sold there than any other location in the country.

In addition to the primary gift, Kissam announced the presentation of $25,000 to provide 1,000 charter memberships to the museum for members of the community through Charleston Promise Neighborhood, which serves children and families of one of the city’s poorest areas.

“Anything this museum decides to do…those individuals will have a front-row seat to everything that is done,” Kissam said.

Kissam has spoken on behalf of, or at his alma mater on numerous occasions, including as commencement speaker for The Citadel Class of 2015 which can be viewed here. Kissam holds an Honorary Doctorate of Business which was awarded to him by The Citadel in 2015.