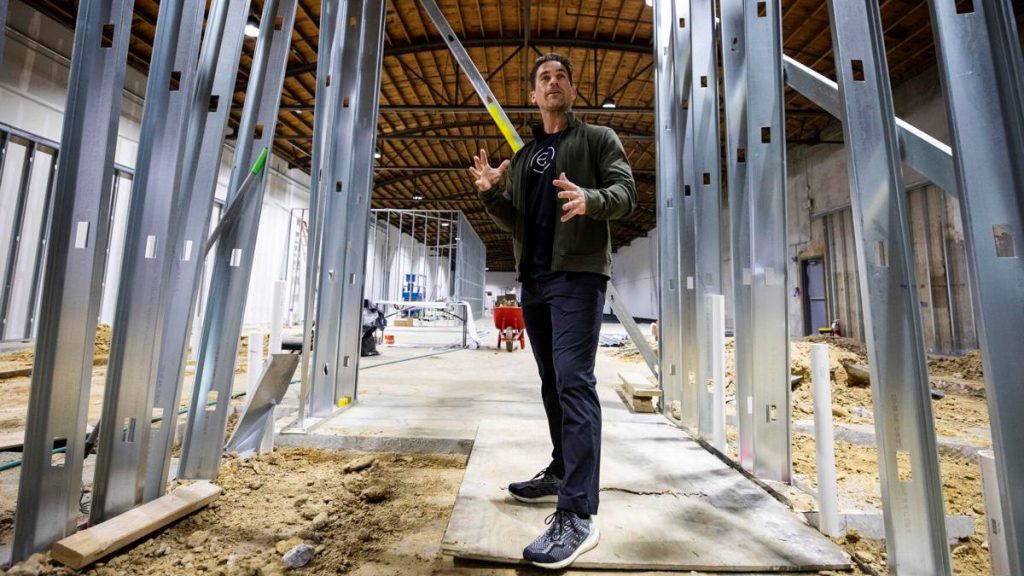 Photo: Joey Welling talks on March 5 about the space under construction for Ethos Athletic Club, a new 21,000-square-foot fitness center he plans to open in May off Huger Street on the Charleston peninsula. (Courtesy: Lauren Petracca, The Post and Courier)

As seen in The Post and Courier, by Warren Wise

Charleston native Joey Welling has been involved in fitness in one way or another since junior high school when he started playing baseball at Bishop England and later in college.

Now, the 34-year-old Citadel graduate is spending about three-quarters of a million dollars to renovate and outfit his own gym on Huger Street in a rapidly changing part of the Charleston peninsula where nearly 40,000 people live within one mile, many of them in new multistory apartment developments that have sprung up in the past few years.

Welling recently leased 21,000 square feet in a barrel-vaulted building beside High Wire Distilling. Construction is underway, and he plans to launch Ethos Athletic Club in May.

For the past few years, he and former business partner Jason Fiutem ran Exemplar Fitness in a 6,000-square-foot space on James Island, but the two parted ways when the lease expired in February and both are now on their own. Fiutem recently started 1014 Fitness in West Ashley.

Welling is temporarily operating out of a 9,000-square-foot space at 483 King St., where the former human resources software startup PeopleMatter once operated in an annex and ugly holiday sweaters could later be found in a pop-up shop.

He lost about half of his 700 clients when he moved operations downtown, but he already has about 300 signed up for the new space and is shooting for another 400.

The new location, an L-shaped shell used more recently by an events company for storage and decades ago as a backup warehouse for the long-gone Sears department store, is undergoing a complete overhaul.

The framework for new interior walls is up, plumbing for new bathrooms with lockers, showers, saunas and steam rooms is being installed and café equipment for smoothies and other healthy items sits along one wall.

Turf will run along a side and back walls over a polished concrete floor, and an elevated cardio area will face a large movie-playing screen. Each cardio machine also will have TV monitors.

“I might put up a few TVs, but they won’t be showing any news programs,” Welling said. “This is meant to be the epicenter of positivity.”

One aspect of the new gym will be a 60-foot, tunnel-like hallway that leads from the front check-in station, café and retail area through the center of the gym to the workout zones.

“We are trying to create the mindset of an athlete walking into an arena,” he said.

Welling chose the name “Ethos” after reading a book a couple of years ago by Howard Schultz, the former CEO of Starbucks and one-time owner of the Seattle SuperSonics basketball team.

The gym owner noticed the word “ethos” in the book, and looked it up for a better understanding of what it meant.

“I told myself if I ever do another gym, that’s what I’m going to call it,” Welling said. “It perfectly embodies the culture of the gym.” It’s one where he often tells his team, “We are not in the fitness business serving people but rather the people business serving fitness.”

Gem of a gym

Welling tried for several months last year to find a large-enough place with parking and a price per square foot he could afford on James Island, but was unsuccessful and eventually turned to Ross Armstrong with MoRE Commercial real estate in Charleston.

Armstrong showed him about 15 different properties on the peninsula, but when Welling saw the vacant warehouse next to the distillery, he was sold and signed a seven-year lease with an extension option.

“It was love at first site with the unique ceilings and the size and the overall location of it,” Welling said. “I think it’s a very positive and up-and-coming area. The more I visit it, the more I realize how central it is to the entire Lowcountry.”

The fitness facility will offer all of the traditional free weights, treadmills and rowing machines, but it also will come with classes for yoga and high-intensity training and will include a dedicated space for physical and massage therapists. Individually numbered net bagging for sweaty gym clothes also will be offered for on-site laundry service.

The gym space wraps around the rear of High Wire Distilling. There, three large roll-up doors lead to a concrete dock overlooking what will become the Lowcountry Lowline linear park running beside the Interstate 26 offramps next to the distillery.

The deck can be used for outside training as well, and eventually a canopy will be installed.

At the front of the gym, a garage door opening will be added where Wyatt Morris’s Tres Palmas Açai Café will offer smoothies, salads and açai bowls. Chef Owen Bernstein of Cramer’s Cuisine also will have pre-made meals to grab and go.

“He got me interested in working out and being fit in the seventh grade when I started playing baseball,” he said. “It was his first year there, and he’s still there.”

He also said Donnell Boucher, his strength and conditioning coach when he played baseball at The Citadel, was instrumental as well.

“He was a huge influence on my life and my career,” Welling said.

Welling’s entrepreneurial spirit also runs back a couple of generations.

Some longtime Charleston residents may remember his mother’s late father, Henry A. Kennedy Sr., who launched the former Kennedy’s Economy Drug Store, one of the first pharmacies in West Ashley, in 1954. He, too, was a Citadel graduate.

At the new gym, Basic Projects is doing the interior design work, Stumphouse is the architect, and Interior Woodworking is the contractor.