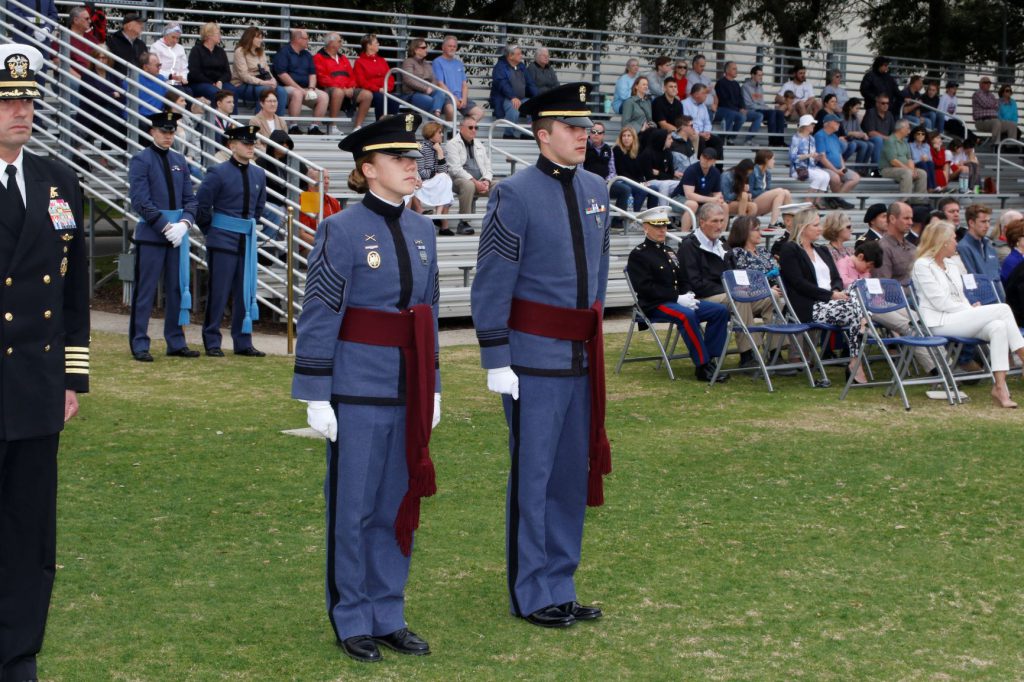 Two members of the South Carolina Corps of Cadets are now proud recipients of prestigious awards.

The highlight of February’s final parade was the presentation of two distinguished awards. Cadet Col. Sarah Zorn was awarded the Society of the Cincinnati Medal and Cadet Lt. Col. Mitchell Felt was presented with the General Douglas MacArthur Cadet of the Year Award.

The Society of the Cincinnati is given every year to the senior cadet officer who best exemplifies the combined qualities of a good soldier and good citizen, characteristics that were evident in the patriots who fought to win American’s freedom.

Zorn, of Aiken, S.C., has excelled throughout her tenure as a cadet, going on to become the first female regimental commander in The Citadel’s history. She is a business administration major who has distinguished herself in academics, fitness and leadership, earning dean’s list, president’s list, and commandant’s list multiple times.

Zorn is a four-year Army scholarship cadet, who supported and participated in Ranger Challenge, a highly competitive, three-day annual event against other senior military colleges. She has also mentored cadets interested in pursuing an Army career. Upon graduation, Zorn will be commissioned in the U.S. Army Field Artillery branch and is looking forward to Airborne School, followed by a challenging military career.

Due to Zorn’s high performance initiative and her leadership, she will join other Society of the Cincinnati recipients whose names are engraved on the plaque located in the entrance lobby of Bond Hall.

The Medal of the Society of the Cincinnati Award bears the name of a Roman farmer, Cincinnatus, who left his farm to take up arms and fight for his city. A successful general, he was an acclaimed dictator, but chose instead to return to civilian life. The officers who served in the Continental Army formed the Society. Their charter members included George Washington, Alexander Hamilton and Marquis De Lafayette. The South Carolina chapter, established in 1783, is one of the six original state societies that have been in continuous existence since that time.

Also each year, the General Douglas MacArthur Foundation presents MacArthur Cadet of the Year Awards to the most outstanding cadets from the 12 colleges and universities comprising the Association of Military Colleges and Schools.

Felt, of Simpsonville, S.C., has demonstrated exceptional performance in academics, athletics and leadership. He is a mechanical engineering major who has earned gold stars every semester with a cumulative 3.9 grade point ratio; he has also been named to the president’s and commandant’s distinguished service list multiple times.

Felt’s accomplishments extend to his commitment to the U. S. Navy, having earned the outstanding naval ROTC midshipman as a freshman, sophomore and junior. He Felt will complete his college career as a distinguished military graduate with plans to commission as a United States Naval Officer and report to flight school in Pensacola, Florida. Felt’s goal is to become a test pilot and eventually join the space program.