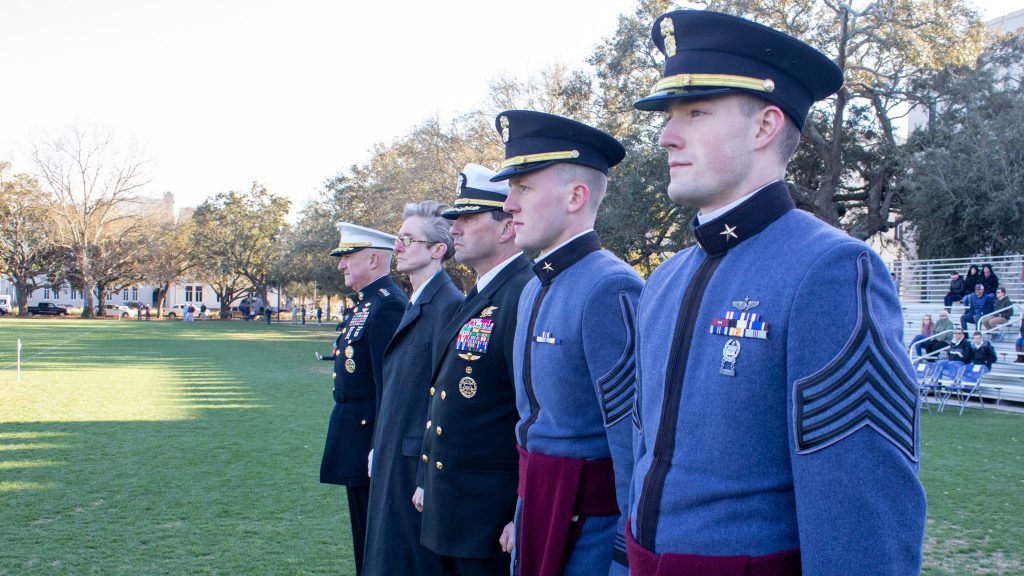 Cadet Lt. Col. Henry Brown was awarded the Society of the Cincinnati Medal and Cadet Lt. Col. James Quimby was presented with the General Douglas MacArthur Cadet of the Year Award.

The Society of the Cincinnati is given every year to the senior cadet officer who best exemplifies the combined qualities of a good soldier and good citizen, characteristics that were evident in the patriots who fought to win America’s freedom.

Brown, of St. Louis, Missouri, is a Political Science major, minoring in English as well as Intelligence and Cyber Security. He has distinguished himself in academics, fitness and leadership — earning gold stars, Dean’s List, President’s List, and Commandant’s List multiple times.

Before being named 3rd Battalion Commander for his senior year, Brown served in multiple leadership positions as an underclassman. He is a member of The Citadel’s Chapter of Omicron Delta Kappa, a national leadership honor society, and the Honor Society of Phi Kappa Phi. Brown has also represented The Citadel at multiple conferences on leadership, ethics, and community across the nation, including the Texas A&M International Affairs Conference, where he presented a paper on low-level Korean conflict.  He also published an article in The Citadel’s Gold Star Journal on the status of Soviet naval power in the 1980s.

Due to Brown’s high performance initiative and his leadership, he will join other Society of the Cincinnati recipients whose names are engraved on the plaque located in the entrance lobby of Bond Hall.

The Medal of the Society of the Cincinnati Award bears the name of a Roman farmer, Cincinnatus, who left his farm to take up arms and fight for his city. A successful general, he was an acclaimed dictator, but chose instead to return to civilian life. The officers who served in the Continental Army formed the Society. Their charter members included George Washington, Alexander Hamilton and Marquis De Lafayette. The South Carolina chapter, established in 1783, is one of the six original state societies that have been in continuous existence since that time.

Also each year, the General Douglas MacArthur Foundation presents MacArthur Cadet of the Year Awards to the most outstanding cadets from the 12 colleges and universities comprising the Association of Military Colleges and Schools.

This year’s recipient is Cadet Lt. Col. James Quimby, from York, South Carolina. He is an honors program Physics major who has earned gold stars every semester, with a cumulative 4.0 grade point ratio. Quimby has also been named to the President’s and Commandant’s Lists multiple times.

His dedication to The Citadel’s mission of producing principled leaders led to his selection as this year’s 2nd Battalion Commander — a job he approaches with total dedication to The Citadel’s values of honor, duty and respect. Quimby’s accomplishments extend to his commitment to the U.S. Air Force; he was the recipient of the Capt. Ryan Hall Sword his junior year and serves in multiple leadership roles. An accomplished pilot, Quimby looks forward to an Air Force career after commissioning at graduation.