Cadet Blog: Traveling through the history of Civil Rights 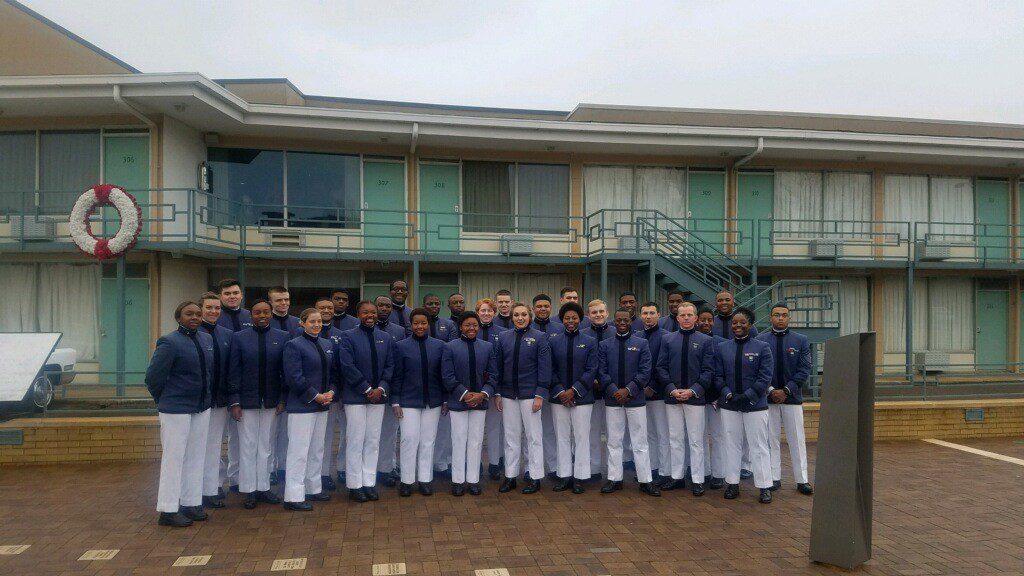 Citadel cadets involved with both the African American Society and Gospel Choir are getting a firsthand look at the history of the Civil Rights movement. They are visiting different museums, churches and historical sites in three different states.

From March 7 – 11, the cadets will travel from Charleston to Nashville and Memphis, TN, as well as Birmingham, AL, and Atlanta, GA.

Rhaei Brown and Ruby Bolden are two of the cadets on the trip. They will both provide blog posts from the road, to give The Citadel community the chance to follow along with the journey.

Brown currently serves as the public affairs non-commissioned officer for the South Carolina Corps of Cadets. He is a business administration major from Baltimore, MD.

Bolden is a sophomore, majoring in exercise science, from Grovetown, GA.

After a long first half of the spring semester, 34 cadets of the Citadel Gospel Choir hit the road together on a Civil Rights Tour of the South. I was fortunate to go with them. Our journey began before sunrise in Charleston, as many cadets stumbled onto the bus in a sleepy stupor after staying up most of the night to finish midterm assignments due before the start of Spring furlough. Despite our weariness, there was a buzz of excitement as everyone boarded the bus bound for four major Southern cities over the next 5 days.

“I love being on this trip with the gospel choir because I get to travel with my second family before going home to see my real family,” said Cadet David Murray.

The first stop on the trip was Nashville, Tennessee, which in 1960 was the first major city in the South to begin desegregating its public facilities. Cadets learned about the Nashville Student Movement in which college-aged men and women led public demonstrations and sit-ins until 1964. Cadets also enjoyed the world-famous honky-tonk atmosphere on Broadway, especially noting the live music in nearly every venue.

After a few hours in Music City, we continued our journey down to Memphis, Tennessee, where we would spend the next day. Along the way, we watched documentaries about the civil rights movement, which included moments that occurred on the streets we had just walked. It was a sobering experience that helped us begin to prepare and process what we would learn on the rest of our tour.

The tour continued in Memphis, Tennessee, the home of the blues, rock n’ roll and soul! Our first stop was the National Civil Right Museum. There, we were able to witness the triumphs and trials that African Americans went through to obtain their rights to equality. We got to see and walk through the very room where Martin Luther King Jr. was assassinated. That room hit home for a lot of cadets such as Braxton Jeffcoat, who said, “I felt deep sorrow and gratefulness because he sacrificed his life so all nationalities can be together as an ensemble.”

After the cadets left the museum, they sung inspirational and heart-felt songs at the VA hospital in Memphis Looking into the crowd, you could see the faces of the veterans light up. They clapped their hands and sang along as the cadets rendered numerous selections. When the performance ended, the cadets were rewarded with a standing ovation. The president of the Gospel Choir, Cadet Michael Rice, was moved by the impact of the performance.

“The mission of The Citadel Gospel Choir is to make the love of Jesus famous and that is exactly what we came here to do,” Rice said. “I think we had an impact on the veterans, maybe making their day a little better.”

Later that evening, we walked down Beale Street. People go there to hear music, eat and enjoy the scenery. The history for Beale St. runs deep and back in the day – like during the roaring 20s – it was really a thing. You could sense and admire the amount of history that resided there.

“Beale Street was a great experience and it coincided with the civil rights theme of the tour,” said Braxton McDuffie.

Memphis was an eye-opening and fun experience for everyone. It was great to know more about our history and to be to bring it back to share with others. This is an experience that none of us will ever forget.

On the third stop on our tour, we arrived in Birmingham, Alabama where we sat in the historic sanctuary of the 16th Street Baptist Church. We learned about the establishment of the city of Birmingham after the Civil War and its booming mining industry driven by the back-breaking labor of freed blacks and American immigrants. We were taught that the church was originally called “The 1st Colored Church of Birmingham,” because it was just that – the first church in Birmingham for African Americans. The location of the church moved and took on the namesake of its new street. 16th St. would later become the center of the civil rights movement led by Dr. King.

16th Street Baptist Church served as a rallying point for leaders of the civil rights movement, and because of its significance it became a target. We sat in awe as we heard accounts of how the church was bombed during a service killing four girls. Many of us marveled as we looked around the church trying to imagine the moment as it happened where we stood.

Later, we visited the Birmingham Civil Rights Institute, which gave us a broader perspective of the stops on our tour. The exhibits were descriptive and interactive, and everyone was able to leave with a better impression of the history it represented. After the museum we continued on to Atlanta where we would enjoy the evening out together, and accommodations in the nicest hotel most of us had ever experienced.

When I signed up for this trip, I did not know it would impact my perspective on life this much. From performing for those who made sacrifices for the country, to walking the streets where so many gave their lives and time for the civil rights movement. Plus, our group of cadets included people that are different from me. The whole experience really opened my eyes to see the big picture.

Growing up, I did not know how deeply the stories of significant leaders like Martin Luther King Jr., Coretta Scott King and Rosa Parks still impact so many people who go far out of their way to get close to where those leaders lived and worked. Out of the three I just named, Coretta Scott King, who passed away in 2006, is my favorite. I am stunned by her natural beauty, strength and poise. Every time I saw her in displays, she was beside her husband or making an impact on her own. That is what you call independence, strength and loyalty!

Along with discovering a new role model, I was able to see things I have never seen and go to places I have never been. The experience overall is something I will never forget and I am thankful that I was given this opportunity.