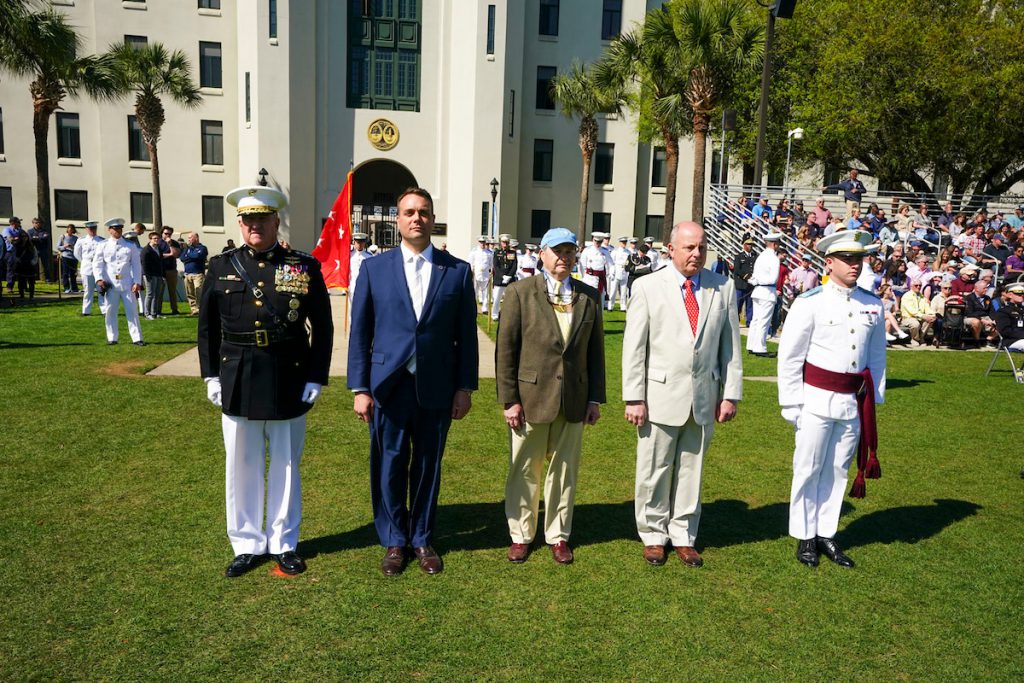 The Palmetto Medal Award recognizes exceptional performance reflecting great credit on The Citadel and the state of South Carolina. Established by the Board of Visitors, the award is presented to those whose service to the college or state is particularly noteworthy. Except for honorary degrees, the Palmetto Medal is the highest honor awarded by The Citadel.

Three individuals who embody the college’s definition of principled leaders were chosen for the honor this year. Members of the Board of Visitors presented two awards during the military review parade on March 26, having previously presented the third award during a meeting in February.

The citations for the three award recipients are below.

Cadet Lt. Col. Rivers Benton has faithfully and dutifully served as chair of the Honor Committee for the Class of 2022 by innovatively pursuing accountability and integrity for himself, the committee and the Corps of Cadets. During his tenure, Cadet Benton oversaw the development of the position of vice chair for defense to safeguard due process and provide further resources and support for cadets. His steady demeanor helped to maintain morale and encourage adaptability during several key leadership transitions.

In addition to his service on regimental staff, Cadet Benton is a member of Omicron Delta Kappa, the National Leadership Honor Society, and has been named to the Dean’s List or earned gold stars every semester.

A Business Administration major from Effingham, South Carolina, Cadet Benton made The Citadel proud when he won the writing award at the 2022 Association of Military Colleges and Schools of the United States Senior Military Conference for his submission on the intersectionality of honor and loyalty, two traits that he embodies.

For his steadfast devotion to integrity and commitment to his college, The Citadel Board of Visitors is proud to award Cadet Lt. Col. Rivers Benton the 2022 Palmetto Medal.

A member of the Class of 1951, Leonard Chelsey Fulghum Jr.’s vast experience in construction, hospital administration, banking, charitable fundraising and over 60 years of civic involvement have given him the acumen needed to become a leader at The Citadel and within the Lowcountry community.

Elected by The Citadel Alumni Association in 1978, Fulghum served on the Board of Visitors for over 24 years. His tenure was marked by great challenges and exceptional triumph. As vice chair and later chairman, he became a driving force who helped lead the college through several periods of turbulence into the 21st century.

For his loyalty and devotion to his alma mater and his generosity of spirit, The Citadel Board of Visitors is proud to award Col. Leonard Fulghum the 2022 Palmetto Medal.

Thomas G. Philipkosky served as a colonel in the United States Air Force and as a master navigator of aircraft such as the KC-135. He has been deployed on missions spanning the globe, including to Manas Air Base, Kyrgyzstan, where he was vice commander of the 376 Air Expeditionary Wing. He retired from the Air Force in 2009 after 27 years of dedicated service to our country.

Col. Philipkosky then rose through The Citadel ranks to senior vice president for operations and administration, overseeing facilities, auxiliaries, technology services, compliance, human resources and project management. A Citadel Class of 1982 graduate with a Bachelor of Arts degree in English, Col. Philipkosky remains committed to his alma mater and has actively worked to improve it by supervising numerous facility endeavors, both operational and groundbreaking. During his 12-year tenure, he has earned the campus’s respect for being a skillful leader and a trusted colleague.

For his loyalty and devotion to his alma mater and his generosity of spirit, The Citadel Board of Visitors is proud to award Col. Thomas Philipkosky the 2022 Palmetto Medal.

South Carolina Corps of CadetsThe Citadel Board of Vistors