Unbroken: Giving thanks for those working to restore the iconic stained-glass windows of Summerall Chapel 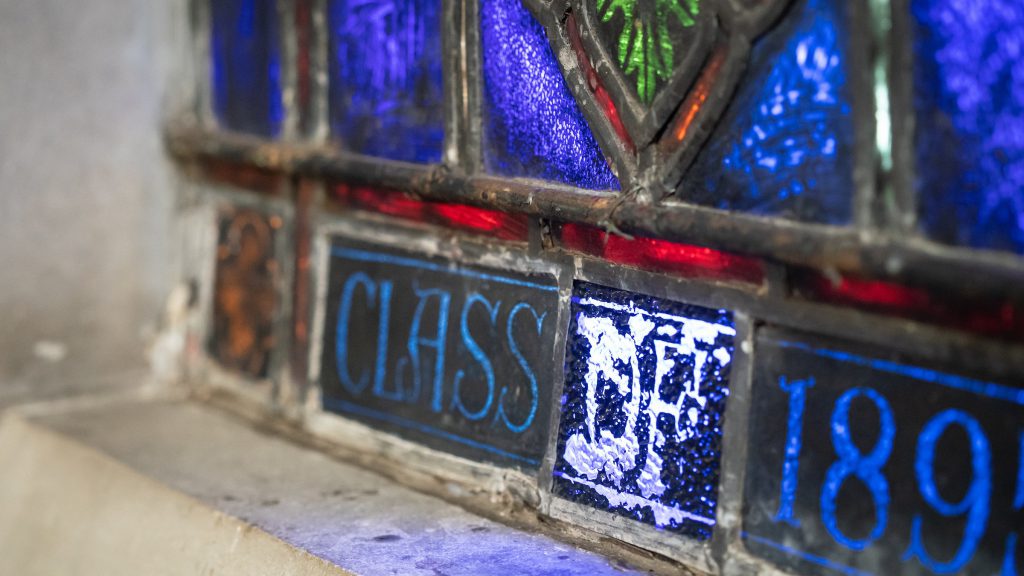 With many thousands of hand-cut bits of glass held together by lead, they have poured shimmering colors and rays of hope down upon generations of cadets, faculty, staff and visitors. Whether praying in solitude or singing in the Gospel choir; attending religious services or funerals; or simply taking refuge in the quiet beauty of The Citadel’s historic Summerall Chapel, the hundreds of panels of stained-glass windows provide a distinctive aurora, surrounding visitors with kaleidoscopic artistry.

Each window panel has thousands of individually hand-painted, kiln-fired stained-glass pieces. But the lead holding those bits of glass in place is deteriorating. They are slowing falling apart.

Though difficult to capture in a photograph and despite patching, sections of some windows are buckling in a manner pointing to future ruptures.

The reason the windows are bowing is Charleston’s excessive heat, combined with cooling the chapel interior, and the many dramatic temperature fluctuations between, according to the company that created the windows when the chapel was constructed in the 1930s. Not an unusual peril for old stained-glass windows in hot, humid climates.

The good news is that the original team of artisans with Pittsburg Stained Glass Studios who worked on the designs and instillations were meticulous artists and record keepers. That same company, still in business, is consulting on the case. They have the original copies of the designs for the windows, for example. In fact, the current president of the company, Kirk Weaver, is the grandson of the man who was originally awarded the contract for the windows about 80 years ago.

“In order to repeat the same design accurately hundreds of times brass stencils were made of all the decorative vignettes that are found in the borders and other decorative areas of the windows. Having these stencils is invaluable in accurately restoring damaged or previously repaired mismatched pieces. We have every stencil that was used when we made the windows originally.”

Weaver says his grandfather came across an article in the 30s reporting that The Citadel was building a chapel with stained-glass windows. “He drove to Charleston and expressed interest in bidding for the project. Of course, it was the depth of the depression era and Grandfather’s company was about to close its doors. Once granted the contract, it saved the company.”

The windows were designed in the manner of the Gothic period and the color scheme follows that of the stained-glass of the thirteenth century. The human figures, however, are in a more modern form. Some of the windows have up to 25 scenes and symbols within.

Funding the restoration of the Summerall Chapel stained-glass

The restoration project, estimated to cost $2 million, will consist of each individual window panel being removed, packaged and safely shipped to the selected contractor. The contractor will then dismantle and refinish every panel to look the exact way they did 80 years ago.

The Citadel Foundation will now coordinate the broader fund-raising effort sparked by the efforts of the Class of 1974.

Gifts can be made securely online by visiting: https://foundation.citadel.edu/StainedGlassWindows.