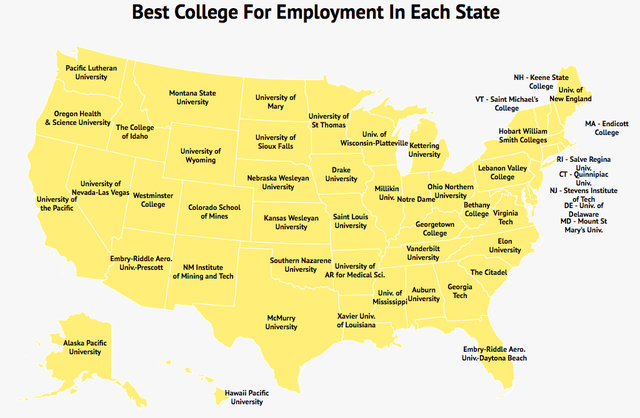 As seen in Thrillist, by Joe McGauley

Earning a college degree almost feels like being formally admitted into adulthood, but the truth is it’s really just the formal start of something a lot tougher than pulling all-nighters during finals week: getting a job. And as much as picking the right major or getting good grades can help make you more marketable to potential employers, the school you go to obviously makes a big difference when you’re trying score a post-graduation gig.

Having an Ivy League institution on your resume can certainly boost your profile, but it doesn’t guaranteed you anything. In fact, many lower-profile institutions have better track records in terms of getting students employed when they leave. Now, thanks to a some new data, we know exactly which colleges or universities in each state are most likely to land you a job.

Using the latest data on job placement ratings for colleges, the career-guidance site Zippia put together a brand new list of the schools in each state with the best record of getting their graduates jobs after graduation. Specifically, they looked at the employment levels for all college graduates a decade after students had earned their degrees, then identified the school in each state with the highest placement rate, and even ranked the 10 with the highest in the country.

Obviously, some of these schools are more specialized, and the industries some graduates are being placed in likely require highly specialized skills. It’s also worth mentioning that there’s a lot more to building a career than simply getting a job straight out of college, and going to one of the above schools is by no means a guarantee you’ll end up earning a paycheck right out the gate. Still, if you’re looking for your best odds at being gainfully employed this should at least give you an idea where to start looking. Though, if you’re looking for the right city to kick off your career, this list might be handy, too.