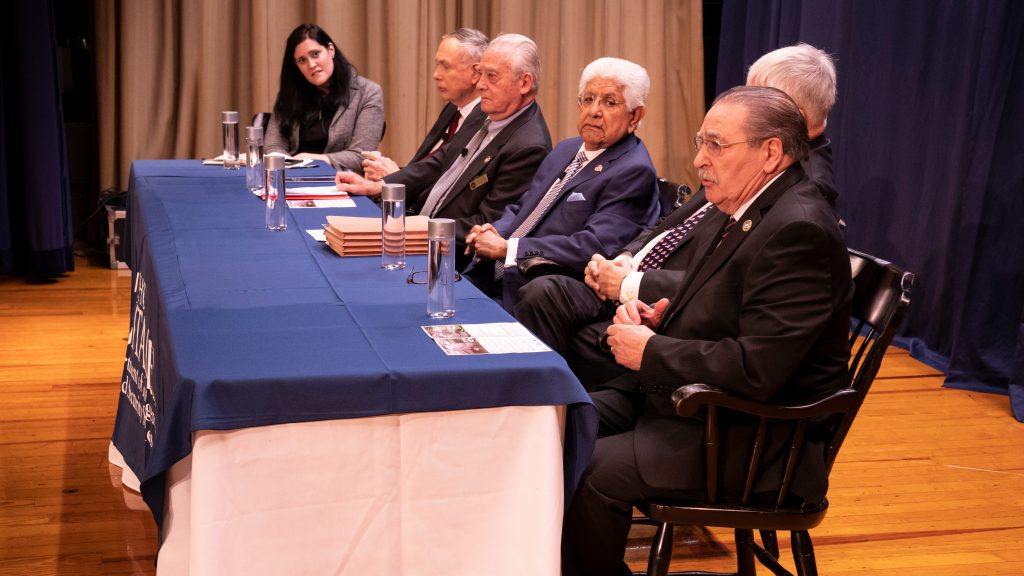 As seen in Washington Decoded, by James Robenalt

Exactly one thousand twenty-five words comprise Article II of the Constitution, and most of them are devoted to how to select a president of the United States.

The two hundred or so left over describe a president’s substantive powers. That the key phrase—“executive power shall be vested in the president of the United States”—has been interpreted generously is an understatement. It has become the basis for vast power since it confers unenumerated powers. By contrast, Article I, which governs the Congress, only vests all legislative powers “granted herein”—a limiting qualifier.

Add sweeping clauses like “commander in chief,” and “he shall take care that the laws be faithfully executed,” and you arrive at the dilemma posed in Melissa Graves’s new book, Nixon’s FBI, Hoover, Watergate, and a Bureau in Crisis. What are the limits of a president’s control over federal law enforcement, especially when the crimes at issue may involve the president in either his/her private or elected capacity? This issue, in turn, raises the question of the government’s power to surveil its citizens, including citizens who may be considered political dissidents and not seditious criminals. That question is at the heart of the present danger posed by domestic extremists or terrorists who have grown exponentially during the Trump administration.

An assistant professor in the Department of Intelligence and Security Studies at The Citadel, Melissa Graves started out to write about the fundamental conflict between the FBI’s duties, as the premier federal investigative agency, and the fact that it answers to the president while also investigating said president from time to time. Her focus was the Nixon administration, when this conflict was in sharper relief, owing to the Watergate scandal, than at any other time save for the past four years. Eventually her research encompassed the courageous FBI agents who pursued the Watergate investigation despite all the headwinds from higher-ups to constrict the search for the truth—including, as it turned out, a higher-up named Richard M. Nixon. Special agents like Angelo Lano, John Mindermann, Daniel Mahan, Paul Magallanes, and John Clynick are profiled in an important chapter about the investigation of the break-in by the FBI’s Washington Field Office. These agents are depicted, correctly,  as being many steps ahead of Washington Post journalists Bob Woodward and Carl Bernstein. While Woodward and Bernstein are celebrated in history as the “intrepid” reporters who cracked the Watergate case, in reality it was the hard work of these FBI agents who simply would not be waylaid.

But the wider context of the Watergate investigation, naturally, dominates the book. In that ambitious endeavor she sought to explore the issue of presidential control over law enforcement, and the concern that unlimited presidential power could lead to a surveillance state where political speech and thought become crimes against the state. Concern over government overreach goes all the way back to the founding of the nation as shown through the passage of the Bill of Rights, which included the First Amendment rights of free speech, a free press, freedom of religion and assembly, and the right to be free from unreasonable searches and seizures as delineated in the Fourth Amendment.

These rights, though guaranteed, have been tested continuously in American life, almost always under the banner of national security, which is seen as the province of the president. During Watergate, the Vietnam war provided the pretext for political repression not only of real bomb throwers but true dissenters. What Graves shows is that a president inclined to authoritarianism and corruption will manipulate weak actors around him to use law enforcement to attack political opponents in the name of national security.

Graves rightly points to Tom Huston as her first example. Huston, a low-level White House lawyer, was asked to create a coalition of intelligence-gathering agencies to address the anti-war violence of students and Black activists who were rising in urban areas because of abhorrent living conditions and repressive police power. While this kind of federal intelligence-sharing was exactly what happened following 9/11 and the passage of the Patriot Act, the tactics envisioned by the Huston plan were much more invasive and dubious constitutionally, involving “black bag” jobs, wiretaps, and bugs. The plan also touched off internal fights in the Nixon administration. FBI director J. Edgar Hoover initially approved and then withdrew his sanction of the Huston plan, likely because he did not want to share such powers with rival agencies like the CIA. Attorney General John Mitchell likewise got his nose out of joint because he wasn’t informed of the effort until after most of the meetings had already taken place.

This tension exacerbated relations between an aging Hoover and Nixon. According to Graves, Hoover was taking heat in the press for domestic intelligence-gathering that had the approval of the Nixon administration, but the White House was not backing up the director in public. The alienation grew to a point where Nixon spent hours of his time trying to figure out how to get Hoover to resign after more than forty years as director. Nixon failed to pull the plug out of fear of repercussions in the 1972 elections. But he had every intention of removing Hoover if and when he was re-elected to a second term.

Initially it appeared as if Hoover had done Nixon somewhat of a favor by dying in early May 1972, weeks before the Watergate break-ins. Nixon looked for a weak character to replace Hoover, one who he imagined he could easily manipulate. There was no weaker actor than L. Patrick Gray, who had never served in any capacity in the Bureau. Gray was a middling lawyer at the Department of Justice with a military background, a crew-cut former Navy officer who would cheerfully follow orders while trying to appear to be in control. His appointment as acting director, as with everything in this story, sparked a surreptitious revolt by longtime Hoover acolyte W. Mark Felt, who thought he had been denied his rightful anointing as the next director. Felt undertook to subvert Gray’s tenure by leaking details about the Watergate investigation to Time magazine and The Washington Post, making it seem to Nixon that Gray could not control the FBI.

After his landslide victory in November 1972, Nixon miscalculated and sent Gray’s name to the Senate for confirmation in February 1973. The hearings, a preview of the Watergate hearings to come, were a complete disaster. Gray was not a facile man. He tried to show the Senate that he was his own man and in the process threw White House counsel John Dean under the bus. He testified that he had kept Dean informed of the Watergate investigation, provided FBI files to him, and allowed him to sit in on FBI interviews of officials in the White House, such as Charles Colson. Behind the scenes, Nixon fumed, eventually plotting to destroy Gray’s credibility with planted questions through a friendly senator on the Senate Judiciary Committee.

While Graves has it right about Gray’s incompetence, a deeper dive into the White House tapes from the time would have added substance and color to her narrative. Chief domestic advisor John Ehrlichman, for example, famously quipped to John Dean that Nixon should let Gray “twist slowly, slowly in the wind” after Gray had implicated the White House in what appeared to be a cover-up. Even worse, when Dean broke ranks, one tape from the evening of 15 April 1973, shows Gray telling Ehrlichman that he intended to lie if asked about receiving files given to him by Dean and Ehrlichman early in the investigation. The files were from Howard Hunt’s safe in the Executive Office Building, and consisted of political sabotage materials that were highly embarrassing, but had nothing to do directly with the Watergate break-in per se. Gray had been given the files so that the White House could say that everything in Hunt’s safe had been handed over to the FBI. Yet later, without being specifically asked to do so, Gray had destroyed the files while burning Christmas wrappings.

Graves’s final chapter is also a good start but could have profited from a more complete and nuanced discussion of executive power and national security. She points out that post-Watergate reforms and the Church Committee’s review of FBI and CIA secret operations almost led to an FBI charter that would have defined and limited domestic spying by the FBI. This leaves the reader wondering what the answers may be when the nation confronts a lawless president, or when the intelligence agencies, engaged in combating foreign or domestic terrorism, begin to gather information about everyday citizens via clandestine surveillance.

Graves also might have analyzed the 16-page memo written by William Barr about the Mueller investigation in June 2018, which Barr composed to burnish his credentials in his quest to return as attorney general. In that memo, Barr argued that Trump’s request of FBI director James Comey to “let it go” when it came to then national security adviser Michael Flynn was a proper exercise of power by the president and not an obstruction of justice. Barr and other proto-authoritarians base such arguments on what they refer to as the “plenary law enforcement powers” granted the president by the Constitution, mainly the “take care” clause. This, Barr submitted, allows a president to supervise criminal investigations directly, including the firing of officials, without ever running afoul of the Constitution. The “unitary executive” theory favored by those like Barr is exactly the kind of unfettered authority Nixon believed he had, and sought to exercise, with respect to the Huston plan and in the effort to gum up the FBI’s Watergate probe. As Nixon himself succinctly described the theory in 1977 during an interview with British journalist David Frost, “when the president does it, that means that it is not illegal.”

History has much to teach us in these fraught days. It is good to have a book that reminds us of a time when law enforcement stood up to unconstitutional efforts and pursued justice without fear or favor.

James Robenalt is a lawyer and author of four nonfiction books, including January 1973: Watergate, Roe v Wade, Vietnam, and the Month That Changed America Forever. He is also a contributor to The Presidents and the Constitution, A Living History (ed. Ken Gormley). He has taught a Continuing Legal Education Course on Watergate with John Dean.

Department of Intelligence and Security StudiesIn the NewsOur Mighty Citadel 2026