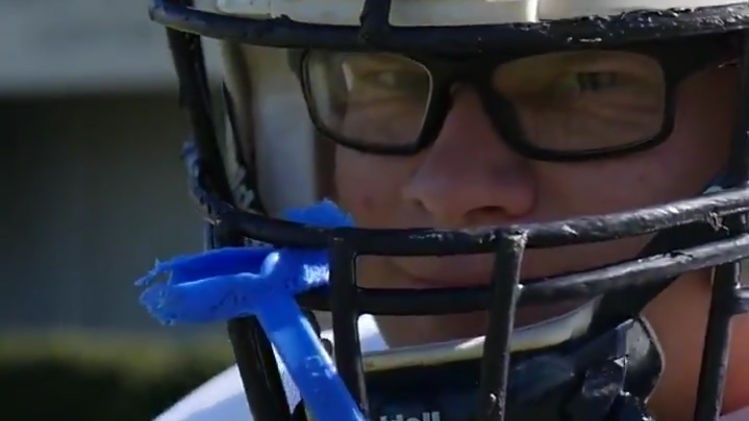 The face of Citadel football is a third-team kicker who stands 5-foot-7 and weighs 166 pounds, sports a grin with a missing front tooth and likes to wear black-rimmed nerd glasses.

Meet the Bulldogs’ Joshua Roides, a junior who looks like he might get cut from the neighborhood middle school team.

In close-up, wearing a helmet that’s two sizes too big with a single-bar facemask, Roides resembles a physics major who took a wrong turn on football tryout day — which is kind of what he is.

But none can claim the Twitter notoriety of Roides, who has served as the social media face of the Bulldogs in the run-up to big games against No. 1 Alabama last year, and against ACC foe Georgia Tech and rival Charleston Southern this season.

Before the Bulldogs took on defending national champion Alabama last season, Brush and The Citadel’s social media team posted a “We got next” message on Twitter that featured a video of the skinny Roides flexing his “muscles.”

The tweet, playing into The Citadel’s underdog role against the mighty Crimson Tide, received a lot of attention, from fans and from media.

“At least The Citadel has a good sense of humor about the beating they’re about to take at the hands of the Tide,” the website Saturday Down South noted. “Maybe, if they’re lucky, they’ll be able to take a 3-0 lead and get a picture of the scoreboard before things get out of hand.”

As it turned out, the score was tied 10-10 at halftime, and Roides was on his way to Twitter fame.

“I think it’s great,” said Roides, who is from Caledonia, N.Y. “The comments we got were hilarious, especially for the Alabama game. Some fans get super upset by it, saying, ‘Who is this guy, what is going on? We’re going to kill you guys.’

“My parents love it, my dad posts it every 30 seconds on Facebook,” he said. “And my teammates think it’s the funniest thing, and it makes them smile. That’s the big thing.”

The reaction was eye-opening, Brush said.

“We expected a little bit of attention,” Brush said. “But the attention we got was unbelievable, so we knew we’d have to revisit Josh at some point.”

However, there’s more to Roides’ story than a gap-tooth smile and a sense of humor.

He’s also a physics major who is on an Army contract at The Citadel, and he’s a Wall Street whiz who already has a job offer from SunTrust Bank and plans a career in quantitative finance. In the Army reserve, he wants to work in cyber-intelligence.

“He’s one of those rocket scientists you read about,” said John Lewis, one of Roides’ professors at The Citadel. “He can build hardware and write software on supercomputers. He’ll do heavy math that is very computational and very complex, and he’ll do very well.”

Among many projects, Roides and his professors worked together to help predict flood tides on the Charleston peninsula for the City of Charleston.

“The National Oceanic people have sensors on the Cooper River side, because of the port,” Roides said. “But there is nothing on the Ashley River side, and that’s what floods (The Citadel) and also King Street.

“So we built sensors that use ultrasonic waves, and I’m also putting in pressure, salinity and temperature gauges, and they will feed into an algorithm to predict future tides.”

“Finance and physics are very similar,” Roides said. “A lot of the first portfolio mangers were PhD physicists. A lot of the same math and algorithms can go into predicting the stock market.”

Roides was a soccer player and kicker on the football team at Caldeonia-Mumford High School, where there were just 59 students in the graduating class. He wanted to go to a military college, but color-blindness kept him out of the Naval Academy. It was down to The Citadel or VMI.

“At VMI, they like to march in the snow,” he said.

During a freshman year physics class, a professor pointed out that no physics major/football player had made it through four years at The Citadel, at least to his knowledge.

“I took that as a personal challenge, that I could do the Army, major in physics, play football and follow my passion for finance at the same time,” Roides said.

Roides lost a front tooth during Army training at Fort Knox over the summer. He slipped while setting up a machine-gun tripod during a driving rain, and now has a false tooth he can pop in and out on command.

“Everyone over-reacted,” he said. “It wasn’t that bad.”

“We put him out there for game-winners in practice, with sprints on the line,” Thompson said. “He’s a good sport about everything, a great guy for team morale. And he’s so smart and intelligent, I know he’s going to do really well after he graduates.”

Any statistical model will say that the odds of Roides kicking in an actual game are slim. But he holds out hope that the Bulldogs will one day have a big enough lead for him to see the field.