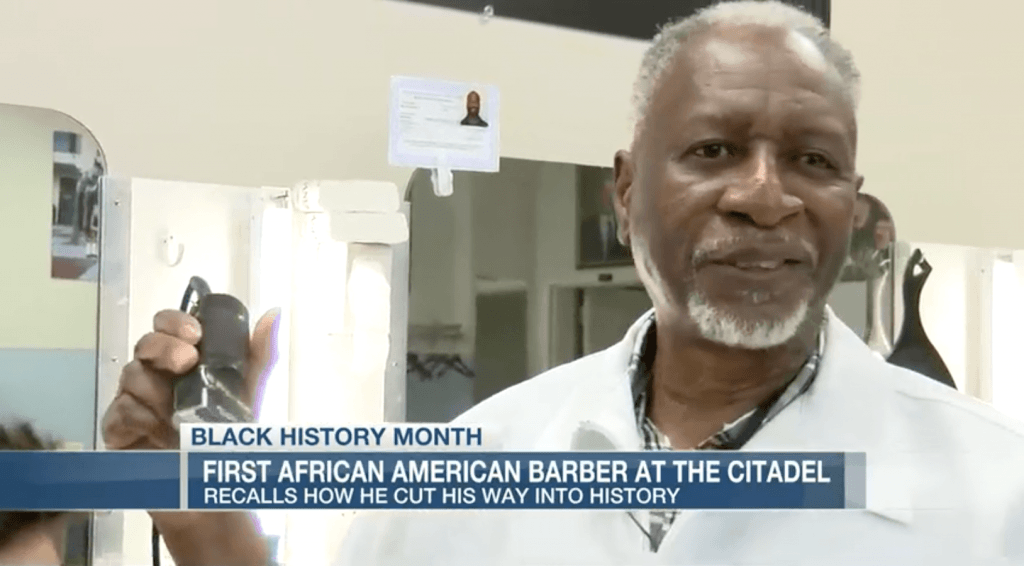 “While The Citadel remains closed in response to COVID-19, the college will continue to share other news and stories. For updated information on The Citadel’s status related to COVID-19, click here.”

As seen on WCSC – Live 5 News, by Ann McGill

The first African American cadet graduated from The Citadel in 1970. One year later, the school hired its first black barber to groom cadets of color.

That barber made an impromptu decision and changed the atmosphere of the barber shop at the military college forever. You might say, he “cut” his way into history.

Born and raised in Kingstree in Williamsburg County, Thad Miller left home in the late 60’s and headed to barber school at what is now Denmark Tech.

In 1971 while working at a barber shop in downtown Charleston, a cadet came in for a cut, and told Miller, they needed someone like him at The Citadel.

“It was a black cadet named Keith Jones, and he said, ‘Well I’ll look into it,’ and he did,” Miller said. “And he called me one day and said, ‘I got you an interview.’ “

Miller got the job, but was told he could only maintain the hair of the black cadets. There were only eight black cadets, so Miller had a lot of time to sit and watch the white barbers do their jobs.

“There’s a little stool over there in the corner, I used to sit on that stool, and the barber shop was always loaded,” Miller said.

Just a few months into his employment in late 1971, a white cadet who didn’t feel like waiting asked Miller if he would cut his hair. Miller got off the stool and said yes.

When that cadet sat down in Miller’s chair, it was the first time he had ever cut white hair. He admits, he was nervous but he had been paying attention to the techniques that the white barbers had been using and he says everything turned out just fine.

“When he finished he faced the others that was sitting there, and he told them to try me, that I could cut hair,” Miller said.

Ten white cadets sat in his chair that day. As for that first white student, he cut his hair every time until he graduated.

Cadets of color like sophomore Jean Carlos Jealindez, are glad that Miller is still around.

“He’s a blessing for this school,” Jealindez said. “He changed this school forever. Just standing up and embracing the difference, that’s something amazing.”

Miller has worked on and off at the Citadel for more than 20 years, spanning almost five decades since 1971. His wife, children and only grand, a grandson, are proud of what he’s accomplished.

Miller was 21 years old when he started working at the Citadel, now he’s 69.

So how long does he plan to keep the clippers buzzing?

“Probably until I’m around 90 something,” Miller laughed.

When CNN held its town halls in Charleston leading up to the Democratic Presidential Primary, Miller cut Don Lemon’s hair.

The CNN anchor asked folks at the hotel where he was staying to recommend a good barber, and someone gave him Miller’s number.

In the NewsSouth Carolina Corps of CadetsThe Citadel Barber Shop