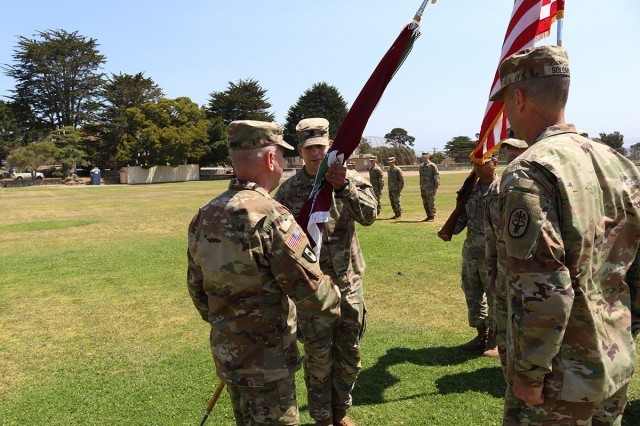 As seen on Army.mil, by  Kirstin Grace-Simons

Photo above: Madigan Army Medical Center Acting Commander Col. Scott Roofe hands the colors of the California Medical Detachment to Lt. Col. Kenneth Reed in a change of command ceremony held on Soldier Field on the Presidio of Monterey, Calif., on June 18. Madigan has most of its clinics in the Pacific Northwest, with its main hospital on Joint Base Lewis-McChord in Tacoma, Wash. CAL MED falls under its command. (Kirstin Grace-Simons)

MADIGAN ARMY MEDICAL CENTER, Joint Base Lewis-McChord, Wash. – It is unusual to see a change of command ceremony take place on a federal holiday. The California Medical Detachment took the opportunity to acknowledge the new holiday, Juneteenth, and merely add to the celebration as Lt. Col. Kenneth Reed took command of CAL MED from Col. Zack Solomon in a ceremony on Soldier Field on the Presidio of Monterey, Calif., on June 18.

“Thank you for being here on this very first observance of Juneteenth as a national holiday; it aligns with our values- supporting freedom,” said Col. Scott Roofe, Madigan Army Medical Center’s acting commander who traveled down to preside over the ceremony. CAL MED falls under Madigan’s command.

Typically, CAL MED’s civilians would add a formation on the field for such an occasion. But, given the holiday, those in attendance were audience members.

CAL MED is more than the clinic on the sunny hill at the Presidio of Monterey. It is so much more. It encompasses Naval Support Activity Monterey, as well as five other army installations spread across approximately 250 miles providing behavioral health, industrial hygiene, and environmental and occupational health services. One of its outposts is the Major General William H. Gourley VA-DoD Outpatient Clinic, which houses CAL MED’s pediatrics and family medicine clinics. It is only the second fully integrated VA-DoD facility in the nation. Solomon took command on the same field in June of 2019.

Roofe enumerated just a few of Solomon’s many command highlights.

“He led the team to successfully and safely implement the DoD’s new electronic health record, MHS GENESIS. I see some knowing nods out there. And not only did they do a great job here, the team with Col. Solomon navigating it expertly and flawlessly, but the work they did here has served as a template for all the other like-sized clinics throughout the enterprise,” shared Roofe. “As evidence of his genuine commitment to quality and safety, he led CAL MED to a very successful Joint Commission survey with the lowest number of findings in the history of this clinic’s existence, phenomenal work.”

Solomon’s healthy ability to build relationships was commented on by Roofe and Reed and his affable nature welcomes people with a smile and good humor.

“My wife was worried about parking today, I made some calls. So, it’s not an issue. Cleared the installation for this,” Solomon joked, starting his remarks with a nod to how quiet the installation was on the new holiday.

His humor continued as he pondered what his speech would consist of had the COVID-19 pandemic not intruded on everyone’s plans for the past year and a half.

He noted how such an alternate universe would have seen the transition to MHS GENESIS as the big story of his command and he and his family would have enjoyed attending all the festivals and events the Monterey area typically has to offer.

“But we don’t live in an alternate universe; we live in the now. The past year and a half was one that we could never have anticipated- a complete lockdown, confusion and fear worldwide. There was so much uncertainty. But when we needed them most, heroes revealed themselves. From the beginning of the COVID pandemic, our CAL MED team sprang into action. Our mission changed in epic fashion; failure was not an option,” said Solomon. “CAL MED, when I say you’re heroes, I mean it quite literally. I could spend the rest of the day speaking about each of you individually and how you poured your hearts and souls into this organization, and most importantly, the service members and families in your care. I will be forever grateful for having served alongside you. To say I’m proud of all of you is an understatement.”

Reed has been deeply involved in the Army Medicine response to COVID as well as he has worked in U.S. Army Forces Command. He also comes to CAL MED with significant operational experience with the 44th Medical Brigade and the 28th Combat Support Hospital, both headquartered in Fort Bragg, N.C., prior to that.

Reed is from Port Norris, N.J. He commissioned in the Medical Service Corps through the ROTC program at The Citadel, Military College of South Carolina. He earned a master’s degree in business and organizational security management. He has deployed to Iraq and Afghanistan and is a member of the Official Order of Military Medical Merit.

With such a hearty resume behind him, Reed nevertheless leads with gratitude, noting the impacts of others on his professional successes.

“A special thank you to a friend and Army pentathlete who is here from JBLM- Lt. Col. Mike Moore. He was my commander when I was a young second lieutenant in Iraq. And Mike, I know it didn’t seem like it at the time, but you had a major impact on my career during that difficult deployment. It’s leaders like yourself, and many others throughout my career, that professionally developed a young officer who needed some purpose and direction. And I know the Army appreciates the 39 years of service you’ve given to the nation,” Reed said.

Noting the size of the shoes he is now charged with filling, Reed recognized the respect with which POM installation leaders view Solomon, seeing following him as a distinct challenge.

“Sustaining those relationships and lines of communication you’ve built is one of the most important things I can do to help CAL MED continue and excel in supporting the readiness and the health of the force and families here at the Presidio of Monterey,” Reed said.

“To the families, Soldiers, civilians and staff for the California Medical Detachment, it is an honor and a privilege to be your commander. I’m excited to lead and learn from all of you, and I look forward to our time together,” he said.

The assembled audience retreated from the sun to a reception welcoming the Reed family and the remainder of the new holiday.