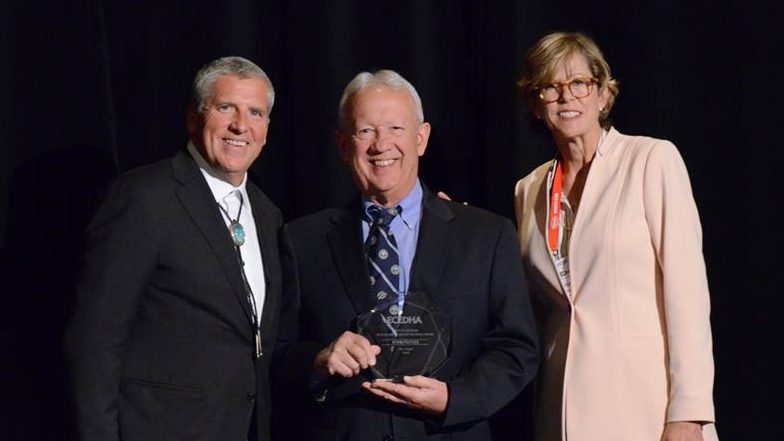 Citadel professor Johnston Peeples, Ph.D., is honored for service and leadership while the School of Engineering recognizes industry leaders for their accomplishments

Johnston Peeples, Ph.D. is the 2019 recipient of one of the electrical engineering industry’s top awards. The Electrical and Computer Engineering Department Heads Association (ECEDHA) presented Peeples with the Robert M. Janowiak Outstanding Leadership and Service Award this spring at their conference in Arizona.

The award is given to an individual with a sustained record of leadership and service to the ECEDHA and to the field of electrical and computer engineering.

Dr. Peeples serves the students as an outstanding teacher. Based on recommendations from both faculty and students, Dr. Peeples was the recipient of the 2015 Lawton Ellis Teaching Award. An excerpt from that award states, “Dr. Peeples is a life-long teacher with vast industry experience who brings a generation of engineering know how to the classroom. He takes his students on an exciting ride through the world of engineering, and makes engineering a reality for them.”

Peeples served as the electrical and computer engineering department head for 12 years and has been teaching at The Citadel since 1999.

He also served as president of ECEDHA in 2015.

Effective January 1, 2015, Peeples was appointed by Governor Nikki Haley to serve on the South Carolina Board of Registration for Professional Engineers and Land Surveyors. In this capacity, Peeples helps develop and promote legislation governing the engineering profession, and with his fellow board members adjudicates disciplinary cases concerning the profession of engineering.

The Citadel School of Engineering has four new industry leaders in its Academy of Engineers. The four were recognized for their professional successes, as well as for making a significant contribution to their community.

Every year, The Citadel School of Engineering Academy of Engineers honors engineers who have lived a life consistent with the school’s mission, which is to “educate and develop principled engineering leaders to serve a global community.”

The academy’s 2019 inductees include the following professionals:

Chris Van Metre is being inducted for his dedication that has resulted in the growth of Advanced Technology International (ATI) to a $1.5 billion collaboration management services company. He is also being honored for his deep community involvement, which includes serving on the Lowcountry Heart Walk Executive Leadership team and as chair of The Citadel’s Engineering Leadership and Program Management Advisory Board.

Van Metre is the president and CEO of ATI, a research and development management services company in North Charleston.

Harry Mills, a member of The Citadel Class of 1958, is being inducted for more than 40 years of service, both in the military and as a civilian civil engineer. Mills is also being honored for his work on large infrastructure projects that have had a lasting effect throughout the world, as well as his expertise in bridge engineering that resulted in completion of numerous hallmark bridges in Florida and the Lowcountry of South Carolina.

Mills is a district bridge engineer with the South Carolina Department of Transportation, responsible for the maintenance of many bridges in the Lowcountry.

B. Chris Tye, a member of The Citadel Class of 1974, is being inducted for his 43-year career with Fluor Corporation, most notably within the nuclear industry. He is also being recognized for his business skills as an engineer and his leadership, helping to develop others within Fluor and their clients. Tye is also being inducted because of his dedication to his alma mater through service on the School of Engineering Advisory Board.

Tye recently retired from Fluor Corporation, where he last served as the president of Fluor’s Power Business Group.

Marc Tye, a member of The Citadel Class of 1982 and brother of Chris Tye, is being inducted for his exceptional 36-year career in the power industry. He is also being recognized for his long association with the American Public Power Association where he has served as a chair, taught others key skills in rate design, advanced rate design and economic development rates. Tye has also served his community and The Citadel through service on the School of Engineering board and as current chair of the Electrical and Computer Engineering board.

Tye is the executive vice president and chief operating officer at Santee Cooper.