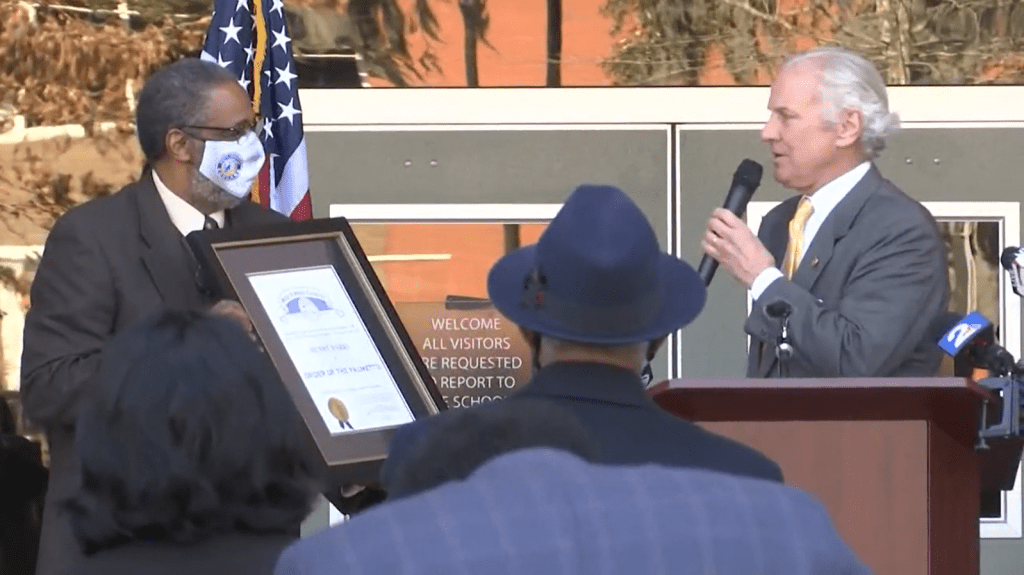 Note: Henry Darby earned two degrees from The Citadel Graduate College. Through what is now the Zucker Family School of Education, Darby earned a Master’s of Education (Secondary School Education) in 2007 and an Education Specialist degree in 2010.

The principal and Charleston County Councilman spends many of his nights stocking store shelves at Walmart in North Charleston to earn extra income – not for himself but to support low-income students and families in their time of need.

“I didn’t expect the attention,” he told News 2. “I simply wanted to work for Walmart without fanfare and to use those resources for my students. But my very first night someone yelled out ‘hey, Mr. Darby, you work for Walmart? Aren’t you the principal?’ and it blew me out the water,” he said with a laugh.

The Today Show was in the Lowcountry last month to honor Darby, and Walmart donated a $50,000 check to the school during their live broadcast.

“We thought, what a cool story to share with the rest of the country,” said Melvin in an interview on News 2 Today. “We decided to come down and share the story of a man who really embodies what a lot of educators have become over the past year in the midst of this pandemic.”

Melvin went on to say that working as an educator during the day and then stocking store shelves overnight – simply for the betterment of others – that is the kind of story that people cannot get enough of right now, a story of hope and helpfulness.

The Charleston County School District announced over the weekend that Governor Henry McMaster was going to present Darby with the Order of the Palmetto, it’s the state’s highest civilian honor awarded to citizens of South Carolina for extraordinary lifetime service and achievements of national or statewide significance.

A ceremony was set for Monday morning outside North Charleston High School.

During his remarks, Gov. McMaster reflected on Darby’s accomplishments throughout his life and career in education before speaking about his selfless efforts to provide support to those who need it the most.

“Henry Darby is a remarkable man,” said Gov. McMaster. “One of the finest things about him is he’s 100% all ours – born here, educated here, been all around the world teaching what he knows – this is the kind of man that we’re proud of.”

Gov. McMaster presented Darby with the prestigious award before turning the microphone over to the high school principal so that he could deliver his thanks to the school district, the community, and share words about why he felt the need to give back.