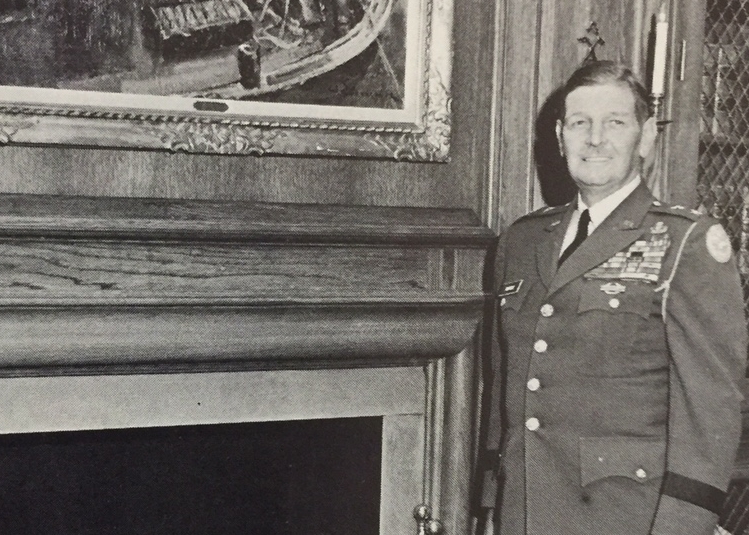 (Above) Maj. Gen. Reuben Henry Tucker, III, while commandant of cadets at The Citadel.  He is seen here as photographed in the college library’s Rare Books Room in 1968.

Note: Maj. Gen. Reuben Tucker, III, served at The Citadel leading the South Carolina Corps of Cadets, first as an active duty colonel from 1955 – 1956, then again after retiring from the military from 1963 – 1968. Brig. Gen. R. Dennis Kerr is a member of The Citadel Class of 1965. He graduated with a degree in business administration before commissioning into the Army.

As seen in Stars and Stripes, by Rachel Riley (Tribune News Service)

The 82nd Airborne Division will induct its second Hall of Fame class on Wednesday, May 22, during All American Week, the North Carolina-based division’s celebration of paratroopers past and present.

The 10 a.m. ceremony will take place at Fort Bragg’s Hall of Heroes.

Twenty-one paratroopers were inducted in the inaugural class last year. Sixteen will be added this year, including paratroopers involved in conflicts going back to World War II.

Here are this year’s inductees:

• Command Sgt. Maj. Joseph R. Allen, who served as command sergeant major for the 82nd’s Airborne Division Support Command from 1999 to 2002. He helped maintain the unit’s readiness during the post 9/11 Global War on Terrorism during Operations Allied Force and Joint Guardian. From 2006 to 2010, he served as the 18th Airborne Corps’ command sergeant major.

• Maj. T. Moffatt Burriss, who died Jan. 4, led Company I, 504th Parachute Infantry Regiment in combat during the Waal River Crossing as part of Operation Market Garden and fought with the division in North Africa, at Anzio Beach, Sicily, and the Battle of the Bulge. He was awarded the Silver Star, three Bronze Stars and the Purple Heart after convincing a German general and about 15,000 German soldiers to surrender to him and two other paratroopers.

• Lt. Col. Robert E. Chisolm, who enlisted as a paratrooper with the 508th Parachute Infantry Regiment, served as a corporal during Operations Neptune and Market Garden and participated in the Battle of the Bulge during World War II. He was the only noncommissioned officer in his regiment to receive the Legion of Merit after taking charge of 83 paratroopers during Operation Market Garden and leading an orderly withdrawal to the forested high ground at Berg-en-Dal while in enemy contact. He later received his commission and served in the Korean and Vietnam wars.

• Lt. Gen. George A. Crocker, who commanded the 1st Battalion, 505th Parachute Infantry Regiment and deployed to Grenada as part of Operation Urgent Fury in 1983. He commanded the division’s 1st Brigade, deploying to Honduras in response to a Nicaraguan incursion and later served as the division’s operations officer and chief of staff, where he supervised the planning and execution of Operation Just Cause. He was the division’s 38th commander from 1995 to 1996, and he completed his service as commanding general for I Corps and is a Silver Star Medal recipient.

• Lt. Col. Gordon “Duke” Dewey, who served during the division’s short-notice deployments to support Operation Power Pack and as part of Task Force Detroit. As a staff sergeant, he deployed with Recon Platoon, 1st Battalion, 505th Parachute Infantry Regiment to Vietnam, where he organized and trained the “Golden Brigade’s” Long Range Reconnaissance Patrol team and was a chief planner for Operation MOT, a combat operation against the 22nd North Vietnamese Army Regiment. After his service in the division, he assisted in founding the Headquarters, Joint Casualty Resolution Command, where he trained and instructed search and recovery teams to look for missing Americans in Vietnam.

• Pfc. Robert W. Dodson, who died Oct. 25, 1943, at the age of 22. He served with the 456th Parachute Field Artillery Battalion in Sicily during World War II. During Operation Husky, he used his 75mm Pack Howitzer to destroy a German “Tiger” tank, disable another and destroyed a number of enemy gun positions, turning the Battle of Biazza Ridge in favor of his fellow paratroopers. His actions helped stop a key German counter-attack against the Sicily beachhead, and he was awarded the Silver Star.

• Brig Gen. chaplain Augustus F. Gearhard, who died March 19, 1974, at the age of 80. He was commissioned as an Army chaplain in 1918 and assigned to the American Expeditionary Forces in France. He received the Distinguished Service Cross for his ministry while serving with the 328th Infantry Regiment. After World War I, he served for 17 years in the Army Reserves and then transitioned to the U.S. Army Air Force. Serving as the fifth Air Force chaplain in the South Pacific Theater during World War II, he received the Silver Star Medal for his ministry. In August 1950, after transitioning to the U.S. Air Force Reserve, he was appointed the Air Force deputy chief of chaplains.

• Capt. Kimberly N. Hampton, who died Jan. 2, 2004, at the age of 28. Hampton served as the Delta Troop commander for 1st Squadron, 17th Cavalry Regiment from 2002 to 2004. An OH-58D Kiowa pilot-in-command, she was the Army’s first female combat pilot killed in action and the first female in the 82nd Airborne Division to die from hostile fire. She was awarded the Purple Heart, Bronze Star Medal and Air Medal for her actions.

• Brig. Gen. R. Dennis Kerr, who served in the division a total of seven years from 1976 to 1991. He is credited with developing the Army’s model for a divisional aviation brigade, activating the 82nd Airborne Division Aviation Brigade, and serving as its first commander from April 1987 to August 1989. He also served as assistant division commander from January 1990 to December 1991, ensuring the division’s successful deployment to Saudi Arabia in support of Operation Desert Storm. He later commanded the U.S. Army Safety Center, developing “The Risk Management Process” that is used across all military services to this day.

• Maj. Gen. Reuben H. Tucker, who died Jan. 6, 1970, at the age of 58. He commanded the 504th Parachute Infantry Regiment in combat from 1942-1945 from Sicily to Germany and, at 31 years old, was the youngest regimental commander during World War II. During his command, while fighting at Anzio beachhead, the 504th Parachute Infantry Regiment earned the nickname the “Devils in Baggy Pants.” He also commanded the 504th during the Waal River Crossing, capturing the Nijmegen Bridge as part of Operation Market Garden. As a colonel, he was one of the most decorated officers in the Army. For his actions during World War II, he was awarded two Distinguished Service Crosses and a Silver Star. He later served as the commanding general of Fort Dix and the commandant of cadets at the Citadel.

• Lt. Gen. John R. Vines, who commanded the 4th Battalion, 325th Airborne Infantry Regiment during Operation Just Cause in Panama, where the battalion executed a combat parachute assault onto Torrijos International Airport. He also commanded the battalion when it deployed as part of Operations Desert Storm and Desert Shield. He later served as the assistant division commander for operations from 1996-1997 and distinguished himself as the commanding general of the 82nd Airborne Division from 2000-2003, where he also commanded Coalition Task Force-82 during Operation Enduring Freedom in Afghanistan. He later served as the 18th Airborne Corps commander and Multi-National Corps – Iraq commander.

A board of senior leaders selected this year’s honorees from nominations submitted by subordinate units in the division.

Inductees were selected based on service within the division, lifelong commitment to the division’s values and either valorous combat action or contributions outside of the division, officials said.

Nominees must have been either awarded the Medal of Honor or served at least two years within the 82nd Airborne Division. They must no longer be eligible for service within the division and must be five years removed from their last service with the division.