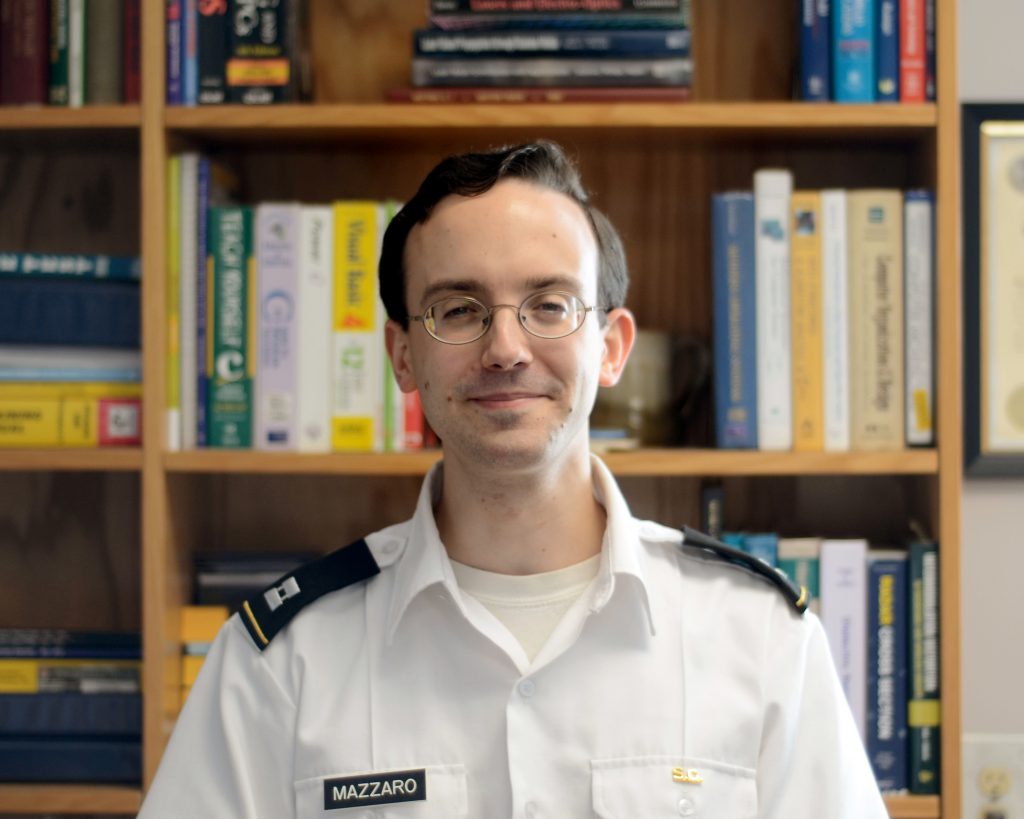 A Citadel professor who spends much of his time teaching engineering on campus, spends the remainder of his time working with a team of researchers at the U.S. Army Research Laboratory (ARL) in Adelphi, Maryland. Gregory Mazzaro, Ph.D., is a faculty member in The Citadel’s Electrical Engineering Department. He is also a member of the Sensors & Electron Devices Directorate at ARL. Three of his recent inventions, created in conjunction with other ARL researchers, expand the Army’s capabilities for providing information to soldiers entering uncharted, and often dangerous, environments.

The patents Mazzaro has acquired protect techniques for locating electronic devices, such as cell phones, from a distance by using a special type of radar. Such devices are normally located via linear or traditional radar, but when the electronics are low to the ground, at a distance, and possibly obscured by rocks or foliage they are difficult to locate. Mazzaro’s inventions include Multitone Harmonic Radar (U.S. patent #9,395,434), Cognitive Nonlinear Radar (U.S. patent #9,435,882), and Combined Radar Assembly with Linear and Nonlinear Radar (U. S. patent #9,476,973). They use an innovative form of “nonlinear” radar to recognize potentially-hazardous electronics remotely.

”Dr. Mazzaro’s research directly impacts the lives of American service members in combat zones by providing them the ability to detect threats triggered wirelessly,” said the Dean of The Citadel School of Engineering, Col. Ronald Welch, Ph.D., USA (ret.). “Exposure to his research is also of great benefit to our cadets and students on campus.”

Mazzaro and his teammates at the ARL have been studying, building, and evaluating experimental nonlinear radars since 2010.

“There are numerous applications for this technology, such as detecting a radio-frequency listening device, or “bug”, planted in a room while searching from a distance. A cell phone smuggled into a prison could be also uncovered,” Mazzaro said. “However, the ultimate goal for nonlinear radar technology is to add capabilities to radar platforms already in use by American soldiers, enabling them to locate electronic devices associated with potential hazards, in order to avoid or disarm them.”

According to Mazzaro, the application of nonlinear radar begins with the wireless transmission of an electromagnetic wave into a specified geographic location. If an electronic device is present, illumination by the wave forces the device to capture some of the energy of that wave. A part of the captured energy is then modulated, or changed, by the semiconductor properties of the electronics. The result is that some of the newly modulated wave is then re-emitted wirelessly by the device, making it detectable.

“With regard to handheld electronic devices, we have seen a dramatic improvement over the results from traditional radars which have difficulty separating small targets such as cell phones from other objects nearby,” Mazzaro said.

Mazzaro joined The Citadel School of Engineering in 2013 and is currently an assistant professor in the Department of Electrical & Computer Engineering. He is employed as a consulting engineer by General Technical Services (GTS) of Wall Township, NJ, working part-time for ARL/GTS during the academic year and full-time on-site at ARL during the summer. He earned an Army Research and Development Achievement Award from the U. S. Department of Defense in 2012 for “Ring-Resonator Technique for Identification of Dielectric Properties of IED Charges and Soils.” To date, Mazzaro is named as primary or co-inventor on another three inventions which are pending review by the U.S. Patent & Trademark Office. He has published more than 60 journal articles, conference proceedings, and technical reports to document his research.