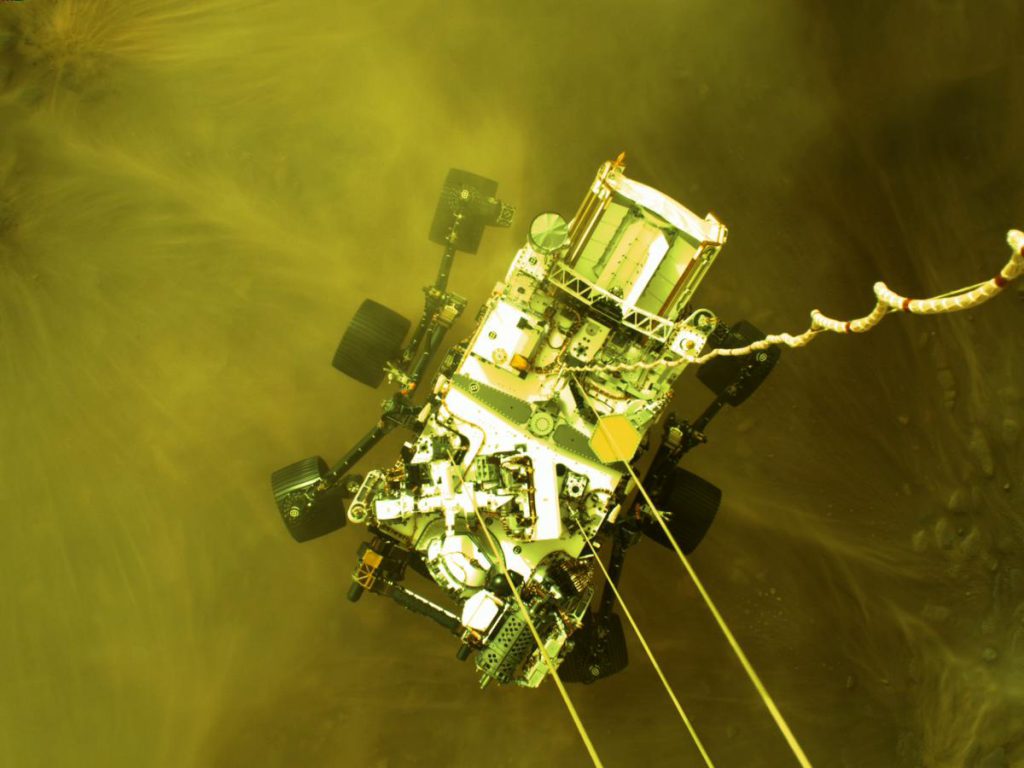 Photo above: NASA’s Mars Perseverance rover acquired this image during its descent to Mars, using its Descent Stage Down-Look Camera. This camera is mounted on the bottom of the descent stage and looks at the rover. This image was acquired on Feb. 22, 2021 (Sol 1) at the local mean solar time of 10:37:31. NASA/JPL-Caltech.

As seen in The Post and Courier
By the Editorial Staff

After a year of grappling with a deadly pandemic, racial injustice and disturbing political turmoil, the landing of NASA’s most advanced rover on Mars sends an important and timely message of how the United States can still do great things.

Last week’s stunning, near-touchdown picture of Perseverance — NASA’s particularly fitting name for the rover — should instill in us a sense of wonder of our ever-expanding ability to explore new worlds.

The image already is being compared with NASA’s most iconic photos, including Apollo 11 astronaut Buzz Aldrin on the moon and Saturn as seen by Voyager 1.

The spacecraft has 25 cameras and two microphones, many of which were turned on during Thursday’s descent, and still more pictures and even audio recordings were released this week. But its most tantalizing potential goes far beyond photos.

The $3 billion craft was guided to a site only a mile away from an ancient river delta, where it soon will look for signs of ancient life; if Mars ever harbored life, scientists’ best guess is that it occurred about 3 billion to 4 billion years ago, when water flowed on its surface.

The rover ultimately will be able to take rock and soil samples and jettison them back into space for retrieval to Earth by yet another spacecraft within the next decade. (NASA is working with the European Space Agency on that.)

“They’re not just looking at the surface but the subsurface. That turns out to be important too when you think about what was the history of this place,” he said. “What they’re doing on site with the X-rays, UV and Raman spectroscopy, they can get that information directly uplinked. Even if they can’t bring back soil samples, they can do a lot.”

The craft also has a miniature automated helicopter that can fly through the planet’s thin air to capture images the rover can’t. And it will try to convert a small amount of carbon dioxide into oxygen, which, if it works, would be crucial to providing breathable oxygen and fuel for future manned missions.

All signs show Perseverance stuck its landing, and it could start roving around by early March.

Admittedly, NASA has sent rovers to Mars before — this is our ninth spacecraft and fifth NASA rover to land on the planet — and China and the United Arab Emirates also have spacecraft in orbit there.

And of course, we shouldn’t put all our bets on Mars. Venus also deserves more exploration, particularly after last year’s controversial discovery in which powerful telescopes detected faint amounts of the molecule phosphine, which might exist only because something living emitted it.

But our six-wheeled, car-size rover is the most advanced ever and ultimately could provide the first proof of the existence of life outside our own planet. If it does, that would be yet another giant leap for mankind indeed.