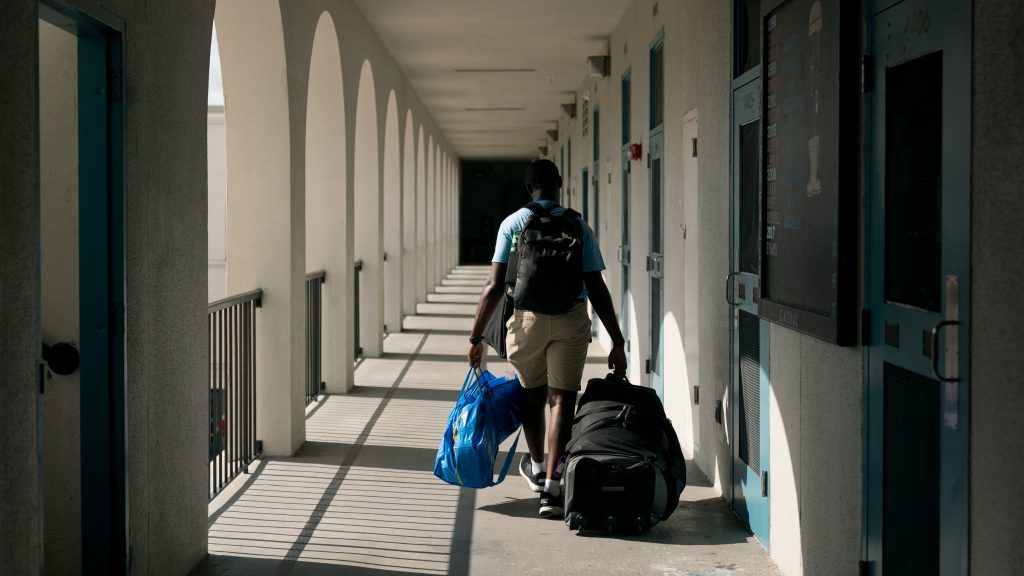 As seen in the Moultrie News, by Catherine Kohn

Sitting in a semi-circle, eight young men and women, each from different backgrounds, begin to hesitantly describe why they decided to attend The Citadel, which is one of six public military colleges in the U.S.

They all seem just a little bit anxious about their new endeavor as Citadel first-year students, called “knobs.” Classes have not yet begun, however, they are enrolled in The Citadel Success Institute, a three-week program which immerses new students in military life and discipline, from rising early in the morning to daily physical training. A type of “basic training” CSI is designed to help potential cadets learn to work as a team and become acclimated to the intense rigor of The Citadel’s expectations. This particular squad is led by Michael Scheur, who guides and mentors their development while in the program.

To read another article on Michael Scheur guiding cadet-recruits to success, also from the Moultrie News, click here.

There are a lot of rules and regulations, certainly more than the average freshman normally faces. But these eight students are all ready to go despite the challenges to come.

Maccio, a young man from Summerville, said he plans to study finance and chose The Citadel because of its reputation and wealth of contacts after graduation. He liked the idea of making connections with people from all over the country.

Bryce, from Whiteville, N.C. intends to study mechanical engineering and plans to eventually get a master’s degree. He wants to enter the Coast Guard. “I love being out in the water, being out in the ocean and I want to stay in the States,” he said, adding that he was attracted to “the military structure, the formality of everything, and the clout of graduating from The Citadel.”

Blake, from Charlotte, N.C., will major in intelligence and security studies. He chose The Citadel “because I’m looking to go into the Army. And if not, law enforcement for sure. Because both my dad and grandfather were in law enforcement.” His father told him “the discipline will help me with whatever I choose.”

William, from Lafayette, Louisiana, came to The Citadel on a four year ROTC Army scholarship to study biology. “I want to go into the military, in the infantry and then go to med school,” he said. “I want to be an orthopedic surgeon, and work on hands.” William said The Citadel will give him “better discipline and better time management, the sort of things I really struggle with. I think that I would have gone into the military whether or not I went to college.” He expects serving in the military to be his life-long career.

Malupeaua, a young woman from Illinois, also plans to major in mechanical engineering. “I decided to come to The Citadel because the discipline and leadership skills they teach here are something you can use throughout life. But I also decided to come here because I am pursuing an ROTC scholarship with the Air Force. It’s something I decided I wanted to do, because my parents were also in the Air Force. And I was always proud of them growing up. So I decided that’s what I wanted to do as well.” She said that as a child, although she missed her parents when they were away serving their country “I knew they were doing something that was protecting our country.”

Malupeaua said she wasn’t sure exactly what she wanted to do long term. “But part of the reason I came here is because I’m sure that with the guidance from all the staff here, and the teachers, that I’m sure I’ll find my way.”

Henry, from Grand Rapids, Michigan, is another student ready to tackle intelligence and security studies. Being unfamiliar with the military, however, was part of what prompted him to attend The Citadel. “I am on a three year Army ROTC contract, and I figured when deciding what college to attend, that not coming from a military family I don’t know much about the regimented life, and what it’s like to live this lifestyle, so I decided that The Citadel would definitely be the best option for me,” he explained. After graduation he plans on “getting my infantry commission into the United States Army and staying in as long as I can.”

Brice is from Argyle, Texas, and is also majoring in biology. He too plans to pursue a medical career. He feels The Citadel provides “the structure, the discipline and time management,” he requires. “And doing all the little details that we have to do, and the accountability of everybody, and the integrity that comes with it.”

Sarah is from Shippensburg, Pennsylvania, and is majoring in chemistry. “I have a four year Army ROTC scholarship.” She said she chose The Citadel because it “seemed to be the best option for me to set me up for success later on in life. Obviously, there’s a lot of correlation between The Citadel and the military. And it just seemed like, it makes sense to me.” Eventually Sarah wants to “go into the Chemical Corps in the Army.” And then, “if I enjoy that, I’ll probably stay, otherwise, I’ll probably go on and get a Ph.D.”

Maccio said the most difficult adjustment in the CSI program was the accountability required as a team. To “make sure everybody’s okay, make sure you have your shirt tucked in. That I always have my water bottle, name tag and keys. And then the waking up part… waking up early at a certain time.” So, what time must they rise in the morning? “Four o’clock in the morning.”

“Every time before we leave a room,” William explained, “we have to check our roommate to make sure we’re clean shaven and that we have our shoelaces tucked in, that our shirts are tucked in, and belts are done.”

William said there are numerous rules to learn. “Like no one steps on the seal outside of this building. It’s just — it’s like a superstition, anyone who steps on it doesn’t graduate. So no one steps. It’s very, very serious.” Then there are other rules involving where and how knobs can walk, or even sit while eating. Questions about the Citadel are asked while in the dining hall and if they don’t know the answer they must know it by the time they return. They also can’t call an upperclassman by his or her first name. And so on. CSI helps them avoid mistakes once their education there begins in earnest. “So we can help other knobs as well,” William said.

Students remain knobs until they are “recognized” at the end of their first year. “They call it Recognition Day,” Sarah explained. “It’s essentially a day where you go out — after you’ve proven yourself for nine months — you go out and there’s like a big physical test to it. Because the whole year has been a mental and physical challenge. So when you get to that point, if you get there, that’s when you’re recognized. You will officially get to learn the names of maybe some upperclassmen and other people, because up until that point, you only know last names. So you get recognized, you can introduce yourself with your first name, and you can learn other people’s first names.”

Brice said he enjoyed the mess hall facts. “Our squad leader, Mr. Scheur, gives us a topic and he wants us to find facts about it. And during mealtime, we tell him our facts. And right now he wants us doing Coast Guard facts. He’ll keep asking you questions until you don’t know the answers anymore.”

All of the students agreed that the “mental part of knob year” was the toughest part of becoming a part of The Citadel community.

“It’s also a balancing act,” said Sarah. “Because the big part of it when you first come in is the military aspect of it, getting yelled at and knowing how to get around campus the right way, and the physical aspect. But then you’re also getting a degree, you’re doing twice as much as any normal college student, and balancing time and balancing sleep and homework and doing all those things. I mean, that’s what it’s going to be like. Any of those things by themselves might not be as hard, but when you put them together, it’s when it gets overwhelming.”

Malupeaua agreed. “The question is, in a few months, will I still be able to keep pushing myself to finish this? In a year? Will I continue on with the same program? In two years? Can I keep still doing this?”

“If you start to fail, they’ll pick you up,” William said about the squad. He said it was similar to running as a group, “when one person falls back, you go back with them and keep going.”

Sarah agreed, “This isn’t a place that you could get through by yourself. You have to make friends.”

In the NewsThe Citadel Success Institute