Could a floating garage on water fix Charleston parking? A Citadel grad thinks so. 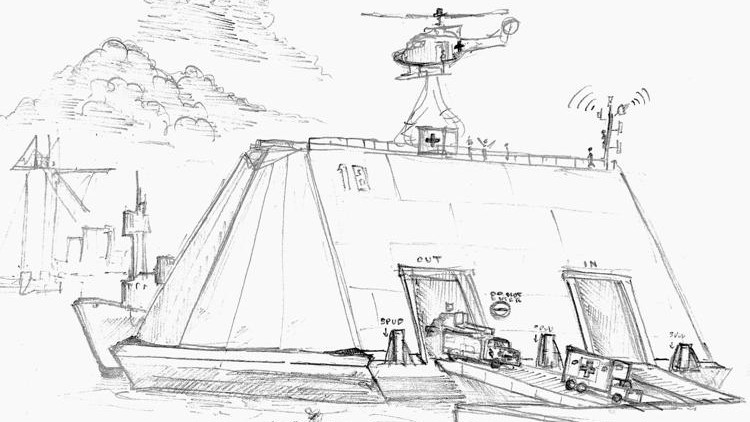 A Citadel graduate was recently awarded a patent for a floating parking deck that he said could help alleviate Charleston’s parking crunch and be deployed for disaster response.

West Ashley native Zach Liollio developed the design for the water-based garage as part of a project for The Citadel’s master’s program in project management.

His long-running interest in historic preservation led him to model the steel-clad invention after the CSS Savannah, an iron-sided ship that was part of the Confederate navy.

The sloped sides of Liollio’s design protect the interior from rain, wind or hail in a way that’s similar to the angled concept that repelled cannonballs.

Sketches of his idea resemble any number of Confederate ironclads that prowled rivers, seas and harbors during the war.

“Being a history buff, I went back in time and looked for different examples,” Liollio said, adding that the steel siding could also stop gasoline and car oil from leaking out of the craft.

Liollio, who works in surveying and project management for the S.C. Department of Transportation, received the patent Nov. 12. The structure is essentially a modified barge, with metal pilings that could be dropped to anchor it.

The project modeled the garage with a 150-car capacity, but the patent is broad, allowing the design to be scaled larger or smaller.

“It’s really an interesting proposition,” said Jacob Lindsay, director of planning for the city of Charleston. “It’s not something that we’ve ever looked at, but certainly for temporary use or in an emergency situation, you could see where an idea like that could be useful.”

It’s not uncommon for ferries to carry cars along with passengers, but a floating garage is rarer. New York City-based MTP Investment Group, a parking company, touts its own watercraft parking on its website, but it’s unclear where or how the structure is used.

Liollio said he hopes to find investors and eventually implement his version of a floating deck. But he acknowledged it could take years and there could be hurdles along the way.

For one, residents of the Lowcountry can be protective of their waterfront views.

“Anything on the water is significant in our city and would have to be considered in terms of residents’ quality of life, first and foremost,” Lindsay said.

Another challenge could be passing an inspection by the Coast Guard, which checks craft ranging from small charter fishing boats to the massive cargo ships that dock in the Port of Charleston.

The agency would only be involved if the deck is actually moving along local waterways, not if it’s stationary, Coast Guard spokesman Lt. Phil VanderWeit said.

“It’s absolutely something out of the norm from what we typically come across for our inspection work,” he said.

Liollio’s graduate adviser, David Greenburg, said his former student already has a road map to put the creation into the real world, based on the proposals he wrote up in school.

“He really had a lot of passion for this idea,” Greenburg said. “I hope to see some of his barges out there in operation.”