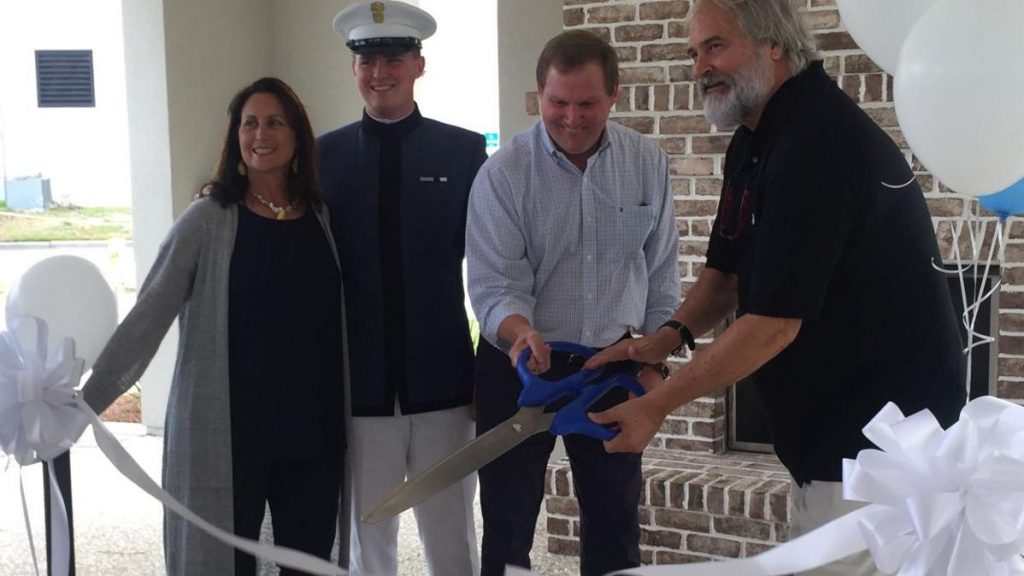 As seen in the Moultrie News, by Cecilia Brown

Citadel cadets will soon be able to boat to and from their college campus along the Ashley River again thanks to a local couple’s ambition.

Mount Pleasant residents, Dr. Chris Swain and his wife Debbie Swain, were walking around The Citadel’s campus one day and “realized the campus’ prime waterfront real estate was useless.”

Their oldest son Kevin graduated from The Citadel this year, and their youngest son Connor is a junior at the school. Dr. Swain explained they wanted their sons and all future cadets to have similar experiences as he’d had when he attended The Citadel nearly 40 years ago.

“We thought it’d be great project to make a better boating center. When I was a cadet I had lots of fun there and it’s just a shame we have this beautiful campus on the water and we’re not taking advantage of it. And we have a great opportunity for cadets to enjoy it that we weren’t taking advantage of. That is what prompted us to take on this challenge,” Swain said.

Swain explained you couldn’t access the area by boat anymore due to the old marina being completely silted in. Also, the old building was in despair and falling down. Prior to Swain’s project, the only two buildings on the water on campus were the Citadel’s rifle range and ware house buildings, both of which didn’t have windows.

The Swain Boating Center broke ground on March 22, 2018 and completion of the entire project is anticipated in August 2020.

Currently, the pavilion, dock master building and docks are finished. Swain said the creek has already been dredged and that it will continue to be dredged periodically through an endowment. Swain assumed the last time cadets used the dock regularly at The Citadel Yacht Club was prior to Hurricane Hugo.

The Citadel’s Vice President of Facilities and Engineering, Jeff Lamberson said that from May 2015 until August 2018 when the dock portion of the project was complete, there was limited access to the water. He stated the docks were unsafe until the Swain’s gift refurbished the docks and waterfront and now cadets have used the docks to launch paddle boards, canoes and kayaks as well as fish.

On Monday, Nov. 4, The Citadel’s facility and construction crews broke ground on the main building of the Swain Boating Center. Swain explained this will be similar in size and architecture to The Citadel Beach House on Isle of Palms with a large venue space for people to have wedding receptions and other events.

The state of the art facility will replace the former Citadel Yacht Club, which was demolished due to the condition of the building. The Citadel will operate the event space and benefit from all of the venue’s proceeds.

“Every weekend one or two people get married at the Citadel. The event space will be a beautiful and convenient place on campus for wedding receptions,” Swain said.

Swain who graduated from the Citadel with the Class of 1981 enjoys getting back together with his classmates. It was actually the Class of 1981 who pulled the funding from their own pockets to build the pavilion onsite at the Swain Boating Center. The pavilion is a covered outdoor facility complete with picnic table seating, a fireplace and grills. On Saturday, Oct. 26 during the Citadel’s Homecoming weekend over 50 of Swain’s former classmates and their family members gathered for the ribbon cutting and opening of the Class of 1981 Pavilion at the Swain Boating Center.

Swain said it was very exciting to see their class and the names of all of the 1981 classmates listed at the pavilion.

“I just think it helps to not only do something good for school and future cadets but it inspires future classes to step up and do things that are helpful,” he said.

Swain explained a lot of people may think these types of buildings and projects are funded by the government or big entities, but they aren’t. He said most of the things at The Citadel are done by donors or classes.

Swain and his wife are completing the funding for the Swain Boating Center through a charitable fund. Organizations and donors are contributing sailboats and other things for the center. Swain said there will be lots of opportunities for volunteers and involvement at the center. As the main building construction takes place, they have a goal to make the docks and picnic area at the pavilion accessible.

Swain said after many generations of cadets not being able to use and access the water from campus, he is thrilled for what lies ahead. Soon cadets will be able to sail from the center and check out motor boats to go fishing or for a ride. He said he’s looking forward to creating that new awareness of the boating center at The Citadel and is hopeful people will start tailgating sports games at the new facility next year. Swain said people at the University of Tennessee arrive to football games by boat and he can see that eventually happening at The Citadel.

The new Swain Boating Center will provide cadets, graduate students, staff and faculty access to the Ashley River. The new facility will also provide educational, athletic and educational opportunities. Lamberson said that Citadel Alumni will have access to the facilities through Alumni Association membership similar to The Citadel Beach House use and access rules. For more information visit citadel.edu/root/ofe-boating-center.