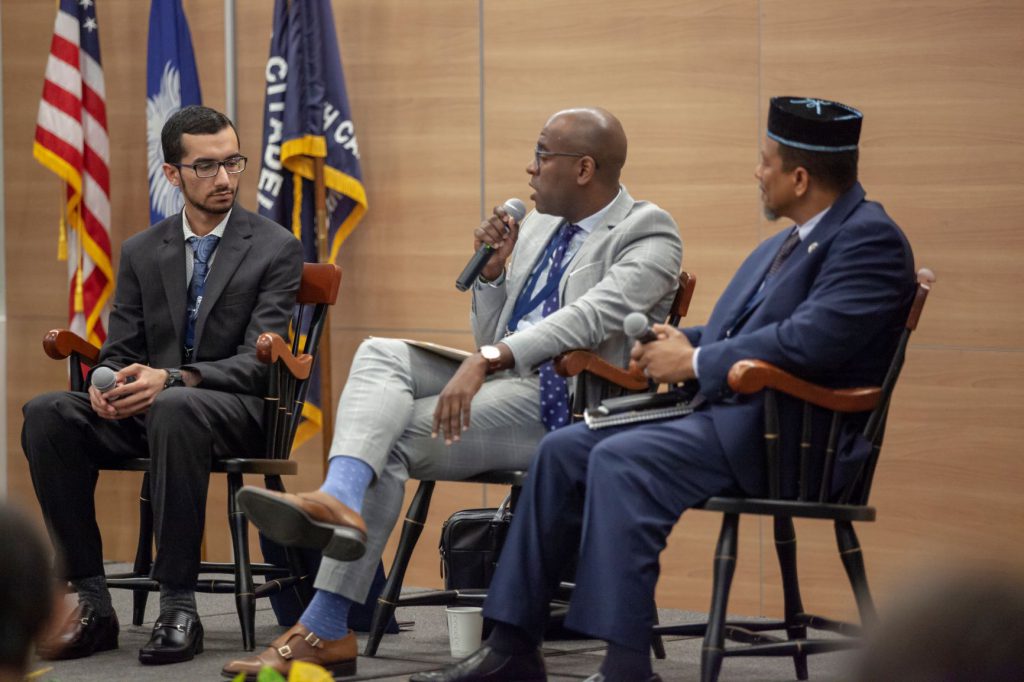 Note: Vice News came to the 2018 Intelligence and Cybersecurity Conference at The Citadel to cover a guest of Dr. Muhammad Fraser-Rahim. Rahim is a Citadel Department of Intelligence and Security studies professor, who is also the Executive Director, North America, for Quilliam International. Quilliam International is the world’s oldest counter-extremist organization with headquarters in the United Kingdom and Washington, D.C. Fraser-Rahim works to help de-radicalize former terrorists, which is how he came to know Mohammad Khalid, the subject of this story.

I was a teenage terrorist

As seen on Vice.com, by Kathleen Caulderwood

When Mohammed Khalid introduces himself to colleagues, he usually avoids mentioning his past — particularly the bit where he took part in an international terrorism plot.

“In terms of bringing it up casually, I don’t think that’s something you can do,” he said. “That’s enough to scare people at first.”

Instead, he starts off explaining that he’s a student studying computer science, and hoping to work in cybersecurity one day.

Mohammed Khalid was 17 years old when he was arrested in 2011 for his involvement in an international murder plot — one of the youngest people ever convicted of terrorism in the U.S. He had attempted to recruit people and solicit funds to help an American woman who called herself “Jihad Jane” and was planning to kill a Swedish cartoonist. Khalid was eventually charged with conspiracy to provide material support to terrorism and sentenced to five years in prison.

Khalid says he was socially isolated and yearning for a sense of belonging. He started spending much of his time online, where he eventually connected with extremists. It’s a common narrative of radicalization. Ultimately, Khalid said, he lost touch with reality.

“I was basically groomed into extremism by people telling me, ‘OK, this is how the world works,’ and not knowing any better,” Khalid said. “I just came to believe everything that happened online as something that was real.”

He said he didn’t out start looking specifically for extremist content but found himself going deeper into religious forums, and eventually to YouTube. Through posting his own videos and conversations in the comments, he made connections with extremists from the U.S. and abroad, who brought him into their circles and thought processes.

“That black-and-white world really attracted me,” Khalid said. “One group of people is against Islam and the other is Muslims who are for Islam.”

Khalid was released from prison in May 2017. He’s among a growing number of former extremists now free and hoping to prove they can be trusted.

“I understand the label that’s now associated with me,” Khalid, 25, told VICE News. “That’s not who I am now. Being someone convicted of terrorism does not mean that you’re devoid of all hope or that you’re not human.”

Since 9/11, the U.S. government has prosecuted more than 800 people for terrorism-related crimes, according to The Intercept. At the end of 2018, 470 had been released.

Before his arrest, Khalid was getting ready to attend Johns Hopkins University, where he had received early acceptance. Today, he lives with his family and is studying computer science at the University of Maryland. Like some other so-called “formers,” he has started contributing to counterterrorism research, sharing his story in a report for Quilliam, a counterterrorism think tank, in 2018.

He also speaks about his experience at panels and conferences around the country. Khalid hopes his public speaking may help someone who’s in a situation similar to his — while also convincing people he has truly changed.

“They always have that doubt in their mind that, OK, is he really the person who he’s trying to portray himself as?” he said. “That’s something that I’m hopefully overcoming every day by making some kind of difference in sharing about what happened to me.”