‘Citadel cadets will play:’ History of athletics at The Citadel long and (sometimes) storied 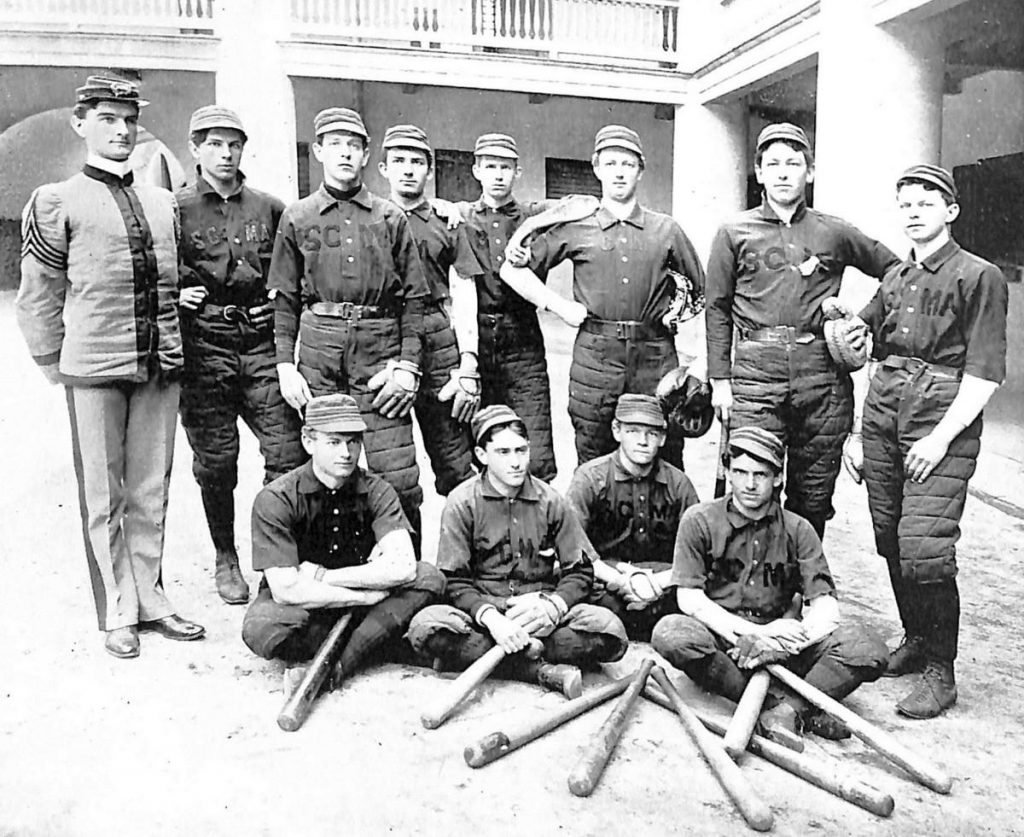 As seen in The Post and Courier,by Jeff Hartsell

Professor D.G. Dwight, manager of the baseball team at Porter Military Academy, announced in the March 31, 1895, edition of The News and Courier that his team would play a series of games against the South Carolina Military Academy, commonly known as The Citadel.

The “series will commence as soon after Easter as the numerous picnic goings will permit,” the story reported. “This is said on the suggestion that the Citadel cadets will play.”

Since the days of scheduling baseball games around picnics, Bulldog athletics has grown into a $17 million per year enterprise, with some 360 varsity athletes in 12 varsity sports for men and women.

Despite the obstacles inherent in recruiting to a military school, and a student body that can’t grow much beyond the 2,000-member Corps of Cadets, The Citadel has had its moments of glory in athletics, such as four Southern Conference championships in football, including back-to-back titles in 2015 and 2016, and a 1990 trip to the College World Series in baseball.

Here’s how the Bulldogs got there:

A 1900 edition of The Citadel’s yearbook, the earliest available at the school’s Daniel Library, describes some of the school’s earliest athletic ventures.

The “Hilt-to-Hilt Fencing Club” featured some 30 members who cheered: “Hilt to Hilt! Hilt to Hilt! ‘Rah for the blood that’s never spilt.”

The Eureka Tennis Club had 10 members and wore garnet and black; the “Base Ball” team had a seven-game schedule. The basketball team played its first varsity game in 1900-01, a 25-7 loss to College of Charleston.

An item in the 1905 edition of The Sphinx describes the introduction of football at The Citadel.

“Heretofore, this especial branch of athletics has been discouraged by those in authority, and the Cadets were not even permitted practice games among themselves,” the author, William W. Dick, notes. “This restriction was removed, however, at the annual meeting of the Board of Visitors in December, a petition to this effect having been made by a number of Second Classmen, with the result that under certain limitations football is now countenanced in the school.”

The first Citadel football game on record is a 0-0 tie with Porter Military Academy in 1905. The team went on to defeat Porter Military twice, and lose to Welsh Neck High School, Fort Moultrie and South Carolina.

A 1931 Citadel game against Clemson was perhaps the most consequential college football game in state history.

The Bulldogs, who went 5-4-1 that season under coach Johnny Floyd, upset the heavily favored Tigers 6-0 in a game played at Florence Memorial Stadium. So shocked were Clemson officials, including coach Jess Neely, that they met in a car outside the stadium immediately after the game to discuss reviving Clemson football.

That emergency meeting led to the establishment of IPTAY, the fundraising group that has fueled Clemson athletics ever since, including national championships in football in 1981 and 2016.

The Citadel moved its football games from Hampton Park to a stadium on Hagood Avenue in 1927. Johnson Hagood Stadium (named after a 19th century chair of the school’s Board of Visitors who also served as governor) opened in 1948 and gained fame in 1999 when crew members of the Civil War-era submarine the H.L Hunley were found buried underneath it. The stadium was renovated in the mid-2000s.

During the heyday of Citadel boxing in the 1940s, large crowds flocked to watch matches. The Bulldogs won a SoCon boxing title in 1949, and Hall of Famer Gunner Ohlandt (Class of 1951) was a football and boxing star considered one of the best athletes ever at The Citadel.

The post-war period of the late 1950s and early 1960s was a golden era of sorts for Citadel athletics under the leadership of school president Gen. Mark Clark and athletic director Eddie Teague.

The late 1960s saw the introduction of the first black cadets and black athletes at The Citadel. Florida native Norman Seabrooks became the Bulldogs’ first black football player in 1969, and went on to be a three-year starter, a first-team all-SoCon pick and a member of the school’s athletics Hall of Fame.

In the 1970s, Citadel football gained a reputation as a “cradle of coaches.” Bobby Ross, who coached Georgia Tech to a national title and San Diego to a Super Bowl, worked at The Citadel, as did Al Davis (future owner of the Oakland Raiders); Frank Beamer (head coach at Virginia Tech); and Ralph Friedgen (head coach, Maryland).

The early 1990s brought another peak to Citadel athletics, with Chal Port’s 1990 baseball team ascending to the College World Series, and Charlie Taaffe’s 1992 football team rising to No. 1 in the nation in Division I-AA, defeating Arkansas and Army and winning the SoCon title.

Women were admitted to The Citadel in 1995, and women’s athletics have grown slowly over time to include varsity teams in cross country, golf, rifle, soccer, track and field, and volleyball. Runner Mandy Garcia was the school’s first female scholarship athlete; weight-thrower Stephanie McNeil is regarded as the top female athlete in school history.

Baseball coach Fred Jordan’s teams won 12 SoCon tournament and regular-season titles, and the SoCon baseball tournament enjoyed its greatest success during a 19-year run in Charleston from 1990-2008, with Joseph P. Riley (a Citadel alumnus) Park opening along the Ashley River in 1997.

The hiring of Mike Houston as football coach in 2014 revived Bulldogs’ football. Houston won a SoCon title in 2015, and his offensive coordinator, Brent Thompson, took over and won a second title in 2016.

The Citadel has sent players such as Paul Maguire, Stump Mitchell, Travis Jervey, Greg Davis and Andre Roberts to the NFL, but the most famous Citadel athlete of all time might be the late Pat Conroy. The famed author played basketball at The Citadel in the 1960s and wrote a best-selling memoir about his hoops career, titled “My Losing Season.”