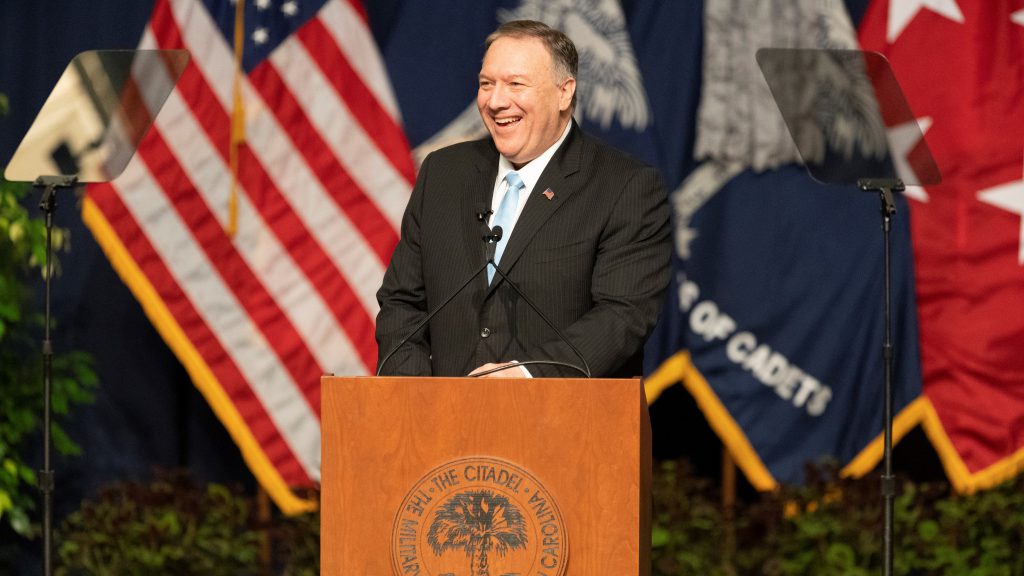 Secretary of State Michael Pompeo spoke to 2,000 South Carolina Corps of Cadets at The Citadel in Charleston on Monday, November 11.

“It made me feel more prideful about the service that I will be doing for my country,” said Ruby Bolden of Pompeo’s speech. Bolden is a Junior at the Citadel. “This was pretty big for everybody. Everybody was pretty excited to see him.”

“My job every day reminds me to maintain the habit of excellence,” he said to Cadets during his speech. “Military service taught me you can only be good as that team that surrounds you.”

Pompeo spoke for about 15 minutes on topics like military leadership, the Trump administration’s approach to diplomacy, and America’s role in the world.

“I want to deliver the message that American leadership is back and that it’s never easy to fight for freedom,” he said.

Pompeo answered several questions submitted ahead of time by Cadets, including one about US aid in the Middle East.

“We will talk about what transpired there and do our level best to ensure the protection of all those in Syria, not just the Kurds, but everyone in Syria,” he said.

“When there’s nobody sitting between the President’s directive, his mission set, and the end consumer, I find it to be very powerful and very helpful to what is we’re trying to do.”

“When President Trump talked about the world he says we should apologize for America. Not now, not ever,” Pompeo added toward the end of his speech.

Ultimately, he wanted Cadets to feel proud, whether they choose to enter the military or not.

You can watch a replay of the Secretary’s speech in the video player below.