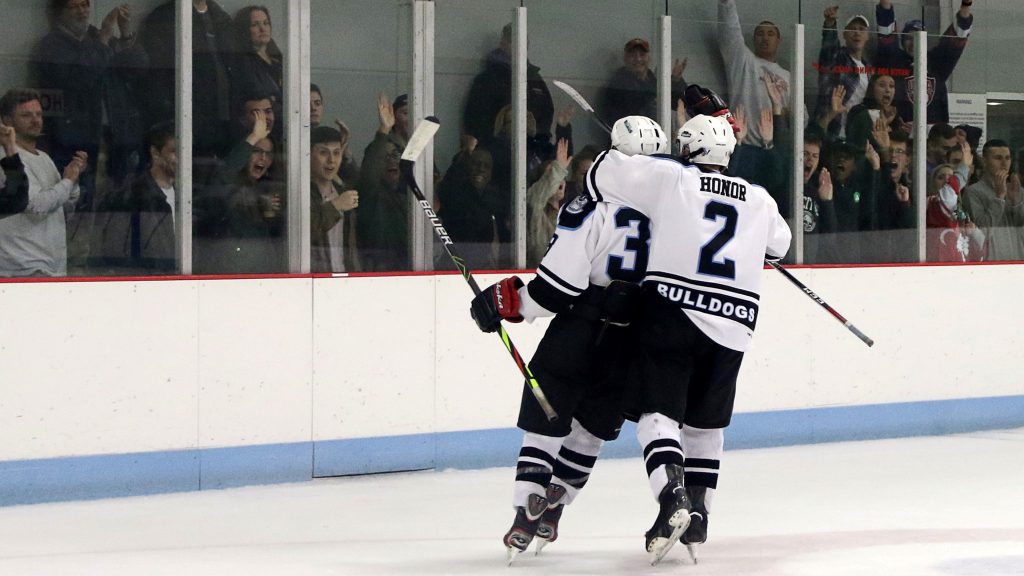 Friday and Saturday nights are met with a new anticipation for many cadets during hockey season.

Walking into the arena, the crowd is buzzing — when the game starts you can’t hear yourself think, the cheers are so loud.

Not taking into account the excitement and adrenaline of the sport of hockey itself, cadets love these nights. Unique from other sports at The Citadel, hockey is a club sport that provides cadets with the opportunity to get off campus and out of uniform.

“That’s what’s fun about the hockey games — they’re a slice of the real world” said Cadet Samuel Wendt. “They’re a great time for cadets, because we are allowed to be like normal kids and blow off some steam. The games are a great way to end the week and support our friends. There isn’t much that’s more fun than watching your friend crush some kid into the boards right in front of you.”

The sport, in general, is quicker and more interactive for spectators since they are so close to the action.

There is already an adrenaline rush from watching passionate players. But when you are within a foot of them — while they are in each others’ faces and fighting over the puck — that intensity increases. Most of the spectators have friends that are players, which also enhances the feeling even more.

“I love watching by buddy Peter (#2) because he brings a wallop,” continued Wendt. “He might not be the biggest fella out there, but he plays like he is and just flattens people.”

Wendt and his friends come to watch one of their classmates battle it out on the ice, and their close relationship helps their group support him at every opportunity.

Despite the lower time commitment required each week, the hockey team still gets the chance to play against some big-name schools, such as University of South Florida, Eastern Carolina and the University of Tennessee.

The weekend that The Citadel hosted Eastern Carolina provided one of the best and worst weekends of the year in terms of results for the team.

The Friday night game drew a huge crowd, and The Citadel won that game after scoring the final goal in the last minute.

A different story followed the night after as they fell to the same team, which Wendt thought was the most disappointing result of the year.

“The Eastern Carolina games were a great time,” said Wendt. “The first game was absolutely insane and the last second goal to win was unbelievable! The second game was a bit rough, but there were some nasty hits that made the loss still quite entertaining.”

Citadel Club Hockey is a great experience, whether as a player or a spectator. The closeness to the game on the glass, the solidarity with the other Bulldogs in the stands and the fun of a night out all come together to make a great cadet experience that provides something a little different.

At the end of the regular season, The Citadel ice hockey team finished second in the conference, just behind the College of Charleston, with 13 wins and 9 loses overall.

The Citadel’s ice hockey team is expected to be back on the ice for next season starting in September.