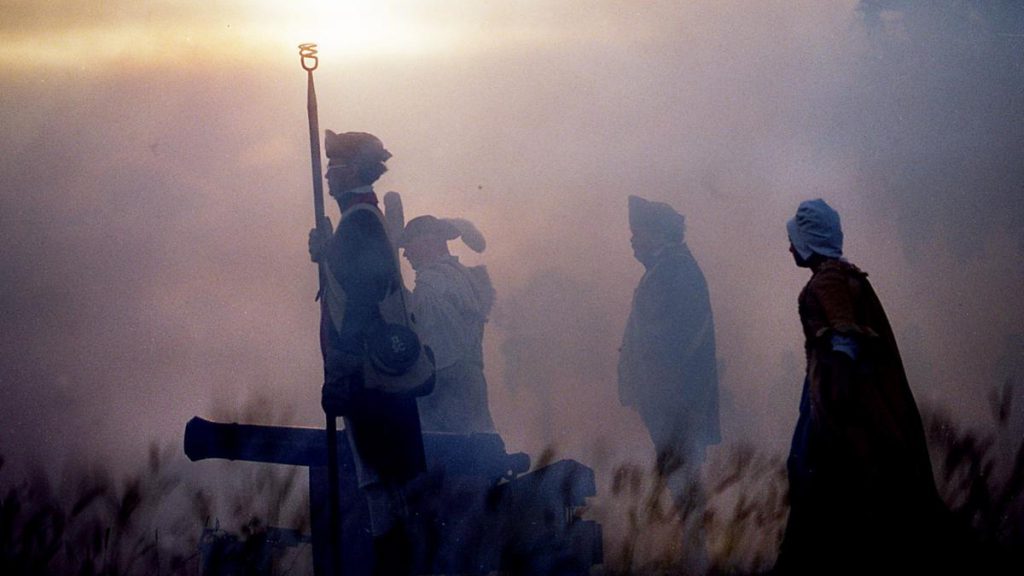 Photo: Revolutionary War re-enactors face the Charleston Harbor after firing a cannon from Fort Moultrie during a ceremony commemorating Carolina Day. (Courtesy: The Post and Courier)

For more information about Rick Atkinson’s visit to The Citadel, click here.

As seen in The Post and Courier, by Robert Behre

The Citadel will kick off its new online military history program by hosting a leading military historian and best-selling author who has just finished a book that details one of the first great battles fought around Charleston.

The story of Carolina Day — the June 28, 1776 victory by Charleston patriots over the British Royal Navy early on in the Revolutionary War — gets its own chapter in “The British Are Coming: The War for America, Lexington to Princeton, 1775-1777.”

Author Rick Atkinson has written six books, mostly about fighting in European during World War II, but he has shifted his focus and recently finished the first of a planned trilogy on American Revolution.

“I’ve always had a great fascination for the Revolutionary War and the insight it gives us into who we are,” he said recently. “I think I’ve got a unique voice established over six previous books, but I also think all great events in history, like all great people in history, are bottomless. I’m an indefatigable archive rat. I know you can always find more revealing information.”

Atkinson was among the first scholars invited by Queen Elizabeth II to review the archival papers of King George III who presided during the Revolutionary War. His book weaves together such strategic issues with operational, even tactical details for both sides. He will talk at The Citadel at 7 p.m. Tuesday in the Holliday Alumni Center.

Atkinson’s book begins in Massachusetts but later details the story of the Battle of Sullivan’s Island, where steely defenders in an unfinished palmetto log fort repulsed a British fleet plagued by a series of self-inflicted gaffes.

“It really heartens the American cause,” Atkinson said of the patriots’ win. “There are bells ringing in Boston and Philadelphia when word arrives of the British defeat. There’s recognition that South Carolina has done what very few others have done, and that’s repulse the Royal Navy.”

Atkinson’s presence is not just to promote a book but also to mark the growth of The Citadel’s online educational offerings, which began in 2016 and since expanded to include nine entirely online Master’s degrees, four undergraduate degree completion (college transfer) programs, and five certificate programs.

VP for Communications Col. John Dorrian said the school sees such courses as an important avenue for growth. The school currently has almost 300 online students, compared to about 2,400 students in the Corps of Cadets.

“It’s no secret that a lot of higher education is moving online,” he said. “What we want to do is get involved with programs that are consistent with the Citadel brand, such as military history, cybersecurity and intelligence.”

The Citadel has spent about $500,000 marketing these programs beyond Charleston, including saturating metro stops near the Pentagon in Washington D.C., where 21,000 officers and civilians work. Many of them may be eyeing a higher ed degree to help further their career.

“There are a lot of Citadel graduates and a strong network in Washington,” Dorrian said. “Our brand is strong in Washington, and we want to capitalize on that.”

Meanwhile, Atkinson will do more than speak during his Charleston visit. He also plans to meet with Charleston Museum director and author Carl Borick to learn more about the Siege of Charleston, which unfolded here four years after the Battle of Sullivan’s Island.

“I’m thinking of ending the next volume with the siege and capture of Charleston because it’s such a significant issue in May 1780,” he said. “I’ve got a few years of digging ahead of me.”