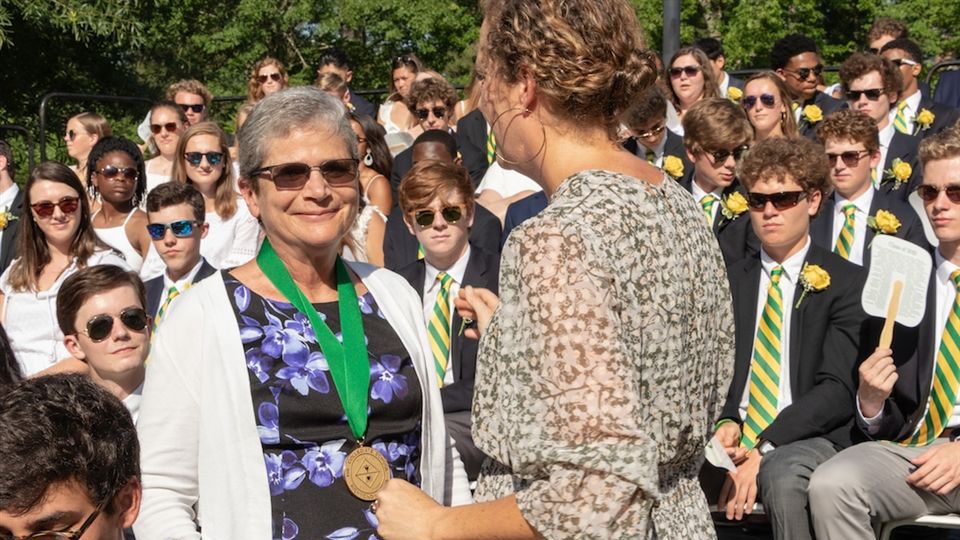 As seen on the Collegiate School website, by Weldon Bradshaw

The plan, always, was to teach.

Where? What level? What subject, even? Eighteen-year-old Conway Fleming wasn’t sure back in 1973 when she left the comfort zone of Collegiate and her hometown of Richmond and headed west to Colorado College.

All she knew was that she wanted to work with kids, and she’d do whatever it took to achieve her goal, even though she wasn’t exactly certain what that goal would look like. Little could she imagine the amazing life journey upon which she was embarking.

“I went to school as an education major,” she said. “One of the requirements was that education majors spend 60 hours helping in a school, which I did. It was a pretty rough elementary school in Fort Carson, a real eye-opener after attending Collegiate.

“I enjoyed myself and learned a lot. I saw situations that I’d honestly been pretty sheltered from: children who had drugs in their homes, teachers having to take on 30 kids at a time, children who didn’t have clean clothes to wear to school.

“I have a letter that one student wrote to me at the end of the year. She was a sixth grader who had been reading at a second or third grade level and was embarrassed and bitter that she had to sit and do extra work with me. She wrote, ‘Dear Miss Fleming. At first, I thought you were a bother, but then I decided you were OK.’ I still have that as my most cherished award.”

That’s saying a lot because during her distinguished career, Dr. Conway Fleming Saylor, professor of psychology and director of service learning and civic engagement at The Citadel, has received myriad prestigious awards for her scholarship and leadership.

Among them, she was recognized in 2012 as South Carolina Professor of the Year and, in early 2019, with the Martin Luther King Jr. Award, which was presented by Wendell Gilliard, who serves the 111th District (Charleston) in the South Carolina House of Representatives.

On May 24, she returned to North Mooreland Road to receive yet another accolade: Collegiate’s Distinguished Alumni Award which honors lifetime achievement in her sacred calling devoted to teaching, research, clinical service, and advocacy for at-risk children and families.

“I was bowled over and so moved to be named,” Dr. Saylor said. “There’re a lot of lifetime achievers coming out of Collegiate School. It’s touching to be in those numbers.”

After declaring a psychology major, she worked at the Boulder Mental Health Center under the guidance of Dr. Joye Fuller, who ran a cutting-edge program for at-risk pre-schoolers with severe behavioral disorders.

“She helped me understand what clinical psychology was,” Dr. Saylor said. “Her modeling and my experience really made the difference in my getting in a good graduate school, Virginia Tech. I wanted to work with children, but there was no clinical child track. The programs that specifically train you in pediatric psychology were just originating.

“Another turning point was that (Dr.) Tom Ollendick came to Virginia Tech to start our clinical child program. He said, ‘If you’re from Richmond, you should look up Dr. Al Finch at the Virginia Treatment Center for Children. I volunteered there as a research assistant one summer, then worked for him between my third year of graduate school and my internship.

“In that year, I learned so much about clinical child psychology. The early work I did in childhood depression and anger really originated at the Virginia Treatment Center with Al Finch. One of my duties as the research assistant was to show the new psychology interns around. One of them was Dr. Bart Saylor from Texas Tech. So I actually not only learned about clinical child psychology but also met my husband.”

She interned in 1981-1982 at Children’s Memorial Hospital in Chicago.

“It was a significant opportunity to get in on the pediatric psychology field from the ground up,” she said. “I was in the right place at the right time. I was particularly interested in children whose psychological needs were secondary to health or developmental issues, children and families who were facing a trauma or a chronic illness or an environmental event like a natural disaster. That became my passion.”

While Dr. Saylor was in Chicago, Dr. Finch left Richmond to start the pediatric counseling service at the Medical University of South Carolina in Charleston

“He called and told me how lovely it was on Isle of Palms Beach,” she said. “I compared the Chicago winter to the South Carolina spring. I interviewed and accepted my first job in Charleston. We never left.”

From 1982 until 1991, Dr. Saylor served as a professor in the department of psychiatry and behavioral sciences at MUSC.

“The mentor-mentee relationship is a theme that comes across during these years,” she said. “The first decade, I was mentored by people I worked with day-to-day and colleagues who were very encouraging. I loved that interaction and that capacity to grow, and I grew to be someone who loved teaching.”

In 1991, a position opened at The Citadel. By that time, she had three children. She and her husband were rebuilding their home after Hurricane Hugo. Balancing intense professional demands and her personal life was running her ragged. A nine-month contract with summers at home was quite appealing.

“It was a personal choice to step out of the fast lane so I’d have enough time and energy for my family,” she said. “As it turned out, the fast lane followed me there. I never lost ground. In fact, I gained ground because I had a rich environment and encouragement at The Citadel.”

In addition to teaching, Dr. Saylor has written prolifically and spoken eloquently and empathetically about issues relating to adolescence and family dynamics. Her most recent research has focused on bullying (especially of special needs youth) and child and adult concepts of heroism.

During her time in Charleston, Dr. Saylor has mentored countless medical students, graduate students, and undergraduate cadets and shared her commitment for experiential learning with her protégés.

“One of my passions,” she said, “has been to get my students out into the community to do work that complemented what I was teaching. I’m teaching a course in disabilities. I’m having them work one-on-one with young adults in the community with disabilities. I’m teaching about developmental psychology, and I’m having them in schools talking about how a kindergartner is different from a third grader.

“That’s the exciting part of learning. It makes the book come alive. What could be more ghastly than sitting in a dark room talking about child development for a whole semester without ever meeting a child?”

That approach, her students’ buy-in, and the respect she’d commanded led to her appointment in 2012 to lead The Citadel’s service learning and civic engagement initiatives.

“I didn’t know completely what that meant,” she said. “They sent me to a meeting about it, and I came back with a vision that became the program I run now. We were at a point where we were getting serious about what principled leadership looks like. For the 21st Century, what do we need to be authentic, principled leaders, and how do we teach that? We’ve integrated the service leadership model into our curriculum.”

Dr. Saylor has developed more than 35 partnerships between The Citadel and the community. In 2012-2013, cadets’ documented service hours totaled 13,074. This past school year, they totaled 34,900.

“Every one of our freshmen and sophomores gets involved in service,” she said. “They’re exposed to diversity that many of our students have never had. Students who have volunteered in Charleston County Schools have come back and said things like, ‘It never occurred to me that some children don’t have enough to eat and really need a school lunch.’”

Dr. Saylor plans to retire in 2020 and focus on family and volunteer work.

“I’ve had such a rich life,” she said. “I’ve had this really extraordinary career while raising my family at the beach. It’s paradise. Every day, I try to be sure I’m explicitly and intentionally grateful that I’ve had this.”

Her advice to Collegiate students?

“Use every opportunity you have,” she said. “I use the word ‘engagement’ a lot. It’s in my title. You have this opportunity to go to a great college. You could be that person who shuffles into the back row in your pajamas and texts somebody, or you could be that person who sits on the front row and talks to your professor afterwards. Be the one who connects and meets people and gets mentors and signs up for service learning.

“I understand how lucky I was to have gone to a school that helped me learn to write. As much as I sweated through Mrs. (Julia) Williams’ English class and Miss (Helen) Moon’s English class, I knew how to write a thesis and support it and do research, and I’ve used it every day of my life and every stage of this career. I’m so happy that Collegiate students are getting those opportunities and the tools they need to make a difference.