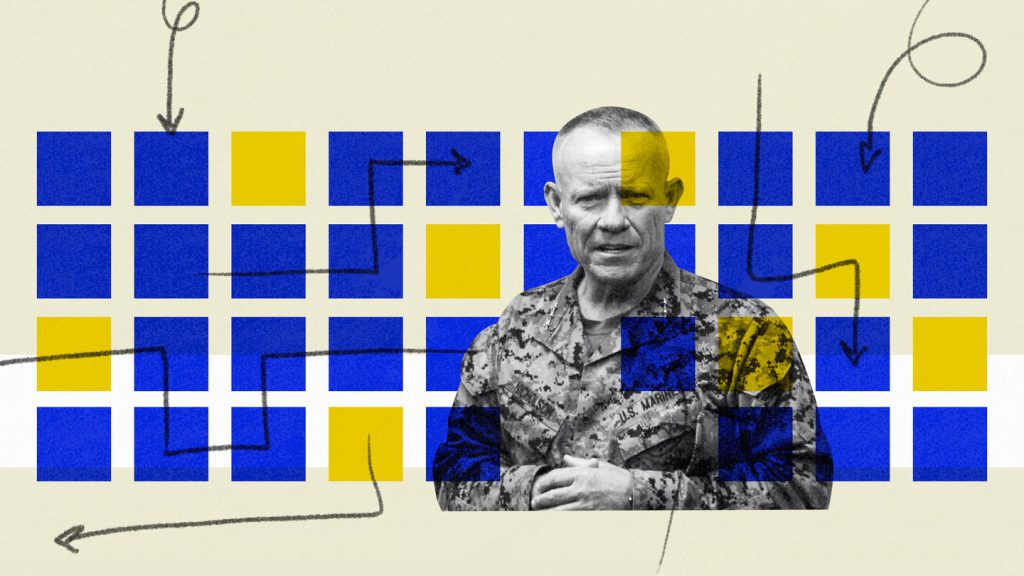 Note: Lt. Gen. Larry Nicholson, a member of The Citadel Class of 1979, was one of the finalists during the most recent search for President of The Citadel.

As seen in The Atlantic, by Kathy Gilsinan

Two years ago, Lieutenant General Larry Nicholson was leading a roughly 30,000-strong Marine Expeditionary Force in Japan that forms part of America’s post–World War II presence in Asia. At one point, he commanded about 20,000 troops in Afghanistan’s Helmand province, the most violent in the country at the time, to fight the Taliban. So when he retired in 2018 after almost four decades of service and moved to Tennessee to manage supply-chain logistics in Knoxville, he thought he’d left behind the battlefield forever.

And for a while, that was true. He spent his time visiting warehouses talking to teams of employees about getting food and medicine to various convenience stores around the country. But with the coronavirus pandemic sweeping the country, Nicholson is once again at war—trying to keep food and medicine stocked to keep America fed, without endangering the health of drivers, packagers, and managers.

Nicholson is a vice president at the wholesaler H. T. Hackney, which has 4,000 employees and serves 20,000 stores from Miami to Detroit. He and I spoke recently about how he applies his battlefield experience to his job, how the coronavirus crisis has many parallels with Afghanistan (including toilet-paper shortages), and what Napoleon might have to do with grocery logistics. The conversation has been edited and condensed for length and clarity.

Kathy Gilsinan: Were you expecting in retirement that your life wouldn’t be as stressful as it was in the Marines?

Larry Nicholson: I did not expect this. I thought I’d come into the private sector and learn a lot about supply chains and hopefully be able to contribute in some areas. I never expected to be in a crisis like this. There are a lot of parallels to my previous life.

Gilsinan: What are you seeing now? What is your day-to-day like?

Nicholson: It’s very much like being in the military. We are at a high alert. There’s things you take for granted, that the stores are going to be full, that the shelves are going to be full, and I think we’re working through the crisis here. There’s a heightened sense of service in the sense that our drivers, our warehouse guys, everybody feels like, “Hey, you know, we are an essential service.” We deliver to 20,000 stores. Our customers and the communities that they serve have never been more dependent upon us, so there’s just this sense of obligation. We’re a critically important part of the supply chain as a wholesaler distributing to these companies.

During this period, for a lot of people, the local [convenience store], especially in the rural areas, that’s where they’re buying their food. That’s where they’re buying the milk, eggs, or their paper products if you can find them. Based on our role in the supply chain, we are considered to be an essential company that’s got to be out there. So our employees are hard at work. A lot of them have to carry passes; in certain states, they’ve got to be able to show that.

Gilsinan: How do you think your experience in the military helps you now?

Nicholson: Tremendously. I mean, just beyond the leadership thing, the understanding of logistics. You know the old quote [sometimes attributed to Napoleon]: “Amateurs talk tactics; professionals talk logistics.” Whether you’re in Afghanistan or Iraq or here at home, you’re not going to be successful unless that supply chain is working for you.

Gilsinan: What are the parallels between you being in Marjah, Afghanistan, trying to get ammunition to the troops, versus making sure there’s toilet paper at convenience stores in Detroit?

Nicholson: I think about how lucky we were, even in the remote areas of Iraq and Afghanistan, [to have a functioning] supply chain. The ammunition is one thing, but [there’s also] the food, the sanitation, and the basic lifesaving support—things that you need to keep combat troops healthy and in the fight. I think we feel very much the same way here. We have things we need to get out to the community. But we all understood in Iraq and Afghanistan that without a supply chain that actually was responsive and functioning, we would not be successful. And we feel the same way here.

Gilsinan: Did you ever experience a toilet-paper shortage in Afghanistan?

Nicholson: Um, Kathy, I’ll tell you that we went to alternate ways. Sometimes it went toilet paper. Sometimes there were other things. Without getting too graphic, some were better than others. But I think for the most part, if we didn’t have nice, squishy rolls of toilet paper, we had something that, uh, that took care of the job.

Gilsinan: So did you find the supply chains actually more reliable when you were in Afghanistan versus now? What are the challenges you see now that you didn’t see then?

Nicholson: No, I think the supply chain is reliable, and my sense is that we don’t have a shortage of toilet paper—people are not using more toilet paper than they did a month ago. They’re just hoarding it somewhere. I know that paper-product manufacturers are cranking out more. And our job is to just keep pushing product out there.

Gilsinan: How are you keeping your employees safe because they have to be out there?

Nicholson: The two biggest things for us are accomplish the mission and take care of your people. In the Marine Corps, I used to talk about [how those are the only two] reasons we have leaders and officers.

We’re going to great lengths to keep our folks healthy. So far we’ve been incredibly fortunate; at this point, we’re zero COVID-19 positive. We are getting people tested, and anybody that doesn’t feel great doesn’t even think about coming to work.

But from 32 different locations, every day there’s issues you’re trying to solve, and you make the best decisions that you can. In a lot of ways, the combat analogies are [apt]. You never have perfect intel on the battlefield. You think you’ve got a pretty good idea of what the enemy’s doing, but you don’t have perfect intel. And it’s the same thing here; we never have perfect intel, and our team is out there walking into stores every day delivering. Success is entirely based on our people and their ability to do their job and [keeping] them healthy. So we’re doing everything we can.

Gilsinan: How have the protocols for your drivers changed day-to-day?

Nicholson: The trucks are rolling; they’ve got plenty of hand sanitizer; they’ve got wipes. After each delivery, [the drivers] go through a sanitation process where everything they touch, they clean. So even in the store, they’re wiping down the areas they’re in.

Gilsinan: What else reminds you of the Afghanistan experience?

Nicholson: Our guys intuitively understand their critical role in the crisis here. The other thing is, for teammates that are potentially exposed, are we providing the best care? You know, how are we rapidly responding to situations where somebody may have come in contact? The same way we focused on immediate medical attention, the “golden hour,” trying to take care of our marines. The “golden hour” in Iraq and Afghanistan was the sense that if you could get a wounded marine into resuscitative care surgery within an hour, his chance of surviving increased exponentially. If it took more than an hour, then his chances of survival diminished significantly.

Gilsinan: So how are you applying that concept now when you think about employees who may have been exposed?

Nicholson: We have our own protocols that ensure that they get immediate medical attention.

We’re doing everything we can to make sure that our folks that need to be tested are tested, and that folks that we need to quarantine, we quarantine. The terrible scenario is if you have people out there working that would be infected. So we’re incredibly cautious and always on watch for anybody that needs medical care to make sure they get it. You know, marines knew that Hey, if I get hit, man, I know I’m going to get world-class medical care right away. I think our employees have to know that the same holds true here.

Gilsinan: You mentioned imperfect intel, like you at one point were motivating people to go outside the wire and they didn’t necessarily know if they were going to come back. And now you have 4,000 people that are going to work and not necessarily sure if they’re going to get sick. How do you handle that problem?

Nicholson: These delivery drivers are stopping at 14, 15, 20 stores a day, and they’re going into these stores multiple times with hand trucks full of food, and then [they get] back in a truck and [move] on to the next spot. For any of those folks, obviously there is risk. They are kind of the unsung heroes of this fight; we should tip our cap to them because they’re out there. They are keeping those stores as full as we can. I certainly understand that the workers at greatest peril during this period are the medical professionals. So I was always incredibly proud of our marines and their ability to continue to get out there and get after the enemy. And I’m equally proud today of our folks here that understand this risk. And yet still every day they’re on the road, and they’re hitting those stores.

Kathy: The intensity of the Afghanistan experience, I’m sure, is still something that you carry with you. I’m wondering what would be the nightmare scenario now for you and your job?

Nicholson: The concern is always, we just don’t know where this thing’s going. None of us know how long this will last.

Gilsinan: Do you see a scenario in which your guys would have to scale back on deliveries?

Nicholson: I just can’t imagine [they] would. That would be a nightmare scenario because that means things have gone terribly wrong, as critical as we are right now to keeping people healthy. You want strong immune systems. Well, you better be sure that they’re well nourished.

Gilsinan: This is a very anxious time for a lot of people. It’s an anxiety that most Americans, I think, have never experienced. But you yourself have been in extremely intense situations and dealt with stress like this. As a leader, do you have any words of wisdom for coping with massive uncertainty like this?

Nicholson: The thing we encourage our leaders to do is be out there, be steady, be strong, encourage people. Keep your sense of humor. Everyone takes cues from their leaders. And if your leader’s confident, he can get across the critical importance of this mission and why everybody’s doing their job here to help our nation through this.

For a lot of these people, hopefully there will never be a bigger crisis in their lives. They won’t have been to combat. And this will be the greatest test a lot of these guys face.

Gilsinan: Afghanistan is such a complicated conflict, and I don’t know that it was always clear to U.S. troops on the ground why exactly they were there. Is the mission here clearer?

Nicholson: For the guys on the ground [in Afghanistan] that were actually doing the daily missions, I think there was an incredible sense of gratification. [Going after] the Taliban, but also helping the people, I think they could see some of these towns come back to life. They could see schools opening. They could see markets opening. There’s always time later to debate about whether we should or shouldn’t have [been there]. There will be no debate in the future about whether we should continue to feed our nation. That’s kind of a slam dunk.

The Class of 2024 reports to campus