75 years ago, the major of Saint-Lô 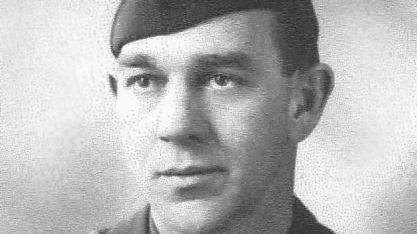 As seen in The Roanoke Times

The Allied landings on the coast of Normandy on D-Day had been more than a month before. They had succeeded, to the extent that a great army had been put ashore and not pushed back into the English Channel. But it did not yet feel like a victory. The Allies were still pinned down, both by the Germans and the topography.

The Americans had hoped to have the crossroads village of Saint-Lô — about 20 miles inland — under control within a day of the landings. Now it was mid-July and the Americans were still short of their first-day goal.

The same was true all across the landing zone. D-Day had turned into “the battle of the hedgerows.” On June 21, one of those American soldiers finally had time to rest. Thomas Howie took his boots off for the first time since he’d come ashore 15 days earlier; sea salt was still encrusted in his socks.

Howie was a balding, 36-year-old teacher from Staunton with a colorful past and a future he could never have known. Howie had grown up in Abbeville, South Carolina, and went on to both a storied academic and athletic career at The Citadel — class president, star football halfback, captain of the baseball team, voted “Most Versatile, Popular and Best All Around” by his classmates. He once led a student strike to protest poor food in the cafeteria — not the easiest thing to do at a military school. But Howie was not one to do the easy things.

In 1928, Howie faced a choice: The Citadel was playing heavily-favored Clemson that day. But he was also scheduled to take the qualifying exam for a Rhodes Scholarship that day in Columbia, two hours away. Howie took the exam. One of the coaches was waiting for him in a Studebaker, and they raced two hours to Charleston to try to make the game. Howie changed into his uniform along the way. They arrived just in time for the kickoff. As the records of The Citadel tell it: “Howie ran onto the field just in time to carry the ball on the first play from scrimmage, taking a hand-off around the end and bowling over two Clemson defenders. Fired up by the happy surprise of his presence . . . the Bulldogs went on to pull a surprise 12-7 upset victory with Howie scoring the winning touchdown.”

Later he learned he had missed qualifying for the Rhodes Scholarship by one-tenth of a point. Instead, he moved to Virginia to teach English literature and serve as athletic director at Staunton Military Academy. He coached football; his teams won four state championships against other military schools, which were numerous at the time. He played baseball in a summer league. He married and became a father. Life seemed good. Then the world intervened.

Howie served in the Virginia National Guard — you would not expect otherwise of a man from The Citadel. In 1941, his unit was called up to federal service. On June 6, 1944, he was wading ashore at Omaha Beach. His best friend, Capt. Sherman Burroughs of Roanoke, was killed before even getting that far.

On June 24th, Howie found time to write a letter home, but he wouldn’t have much time to rest. There was still a war on, and the Americans had to get to Saint-Lô if they were ever going to get to Paris and, eventually, Berlin. On July 13, Howie was put in charge of the 3rd Battalion of the 116th Infantry. The first mission: To relieve another battalion that had been surrounded by the Germans and was nearly out of food and ammunition. On the morning of July 17, Howie and his men set off at 4:30. His final words before he departed: “See you in Saint-Lô!”

Howie’s men drove through the fog — and into hand-to-hand combat. Rifles weren’t much use. Howie and men resorted to pistols, grenades — and bayonets. Howie personally took out two German machinegun nests – a military term that sanitizes the bloody work required — and in two hours the encircled 2nd Battalion was encircled no more.

The plan had been for both battalions to then push onto Saint-Lô, but it was quite apparent the 2nd Battalion was in no shape for any more action. So the 3rd Battalion would go alone. “Yes, we can make it,” Howie radioed to his commanders, yet again signing off with: “See you in Saint-Lô.” Just then, German artillery came raining down. Howie’s men ducked for cover. He remained standing to make sure they were safe. A fragment of mortar sliced through his back and into his lung. Within two minutes, he was dead. Some of his men began to cry.

The next morning, the 3rd Battalion finally fought its way to the outskirts of Saint-Lô. By order of Gen. Charles Gearhart, Howie’s body was laid on a stretcher, draped with a U.S. flag, and then loaded onto the hood of a Jeep — so it could be said that he was the first American to enter what remained of Saint-Lô. The writer Samuel Beckett later dubbed it “the capital of the ruins.”

The soldiers stopped at the rubble that had once been St. Croix Cathedral and laid Howie’s flag-draped body there — then went on to continue that battle that still raged around them. At 6 p.m. on July 18, Gearhart finally declared Saint-Lô liberated.

For two days, Howie’s body lay there in the open. American soldiers and French villagers alike filed past to give their respects, the former removing their helmets, the latter often leaving flowers. It was a gesture that was said to have had no precedent in the war — an ordinary soldier lying in state, so to speak.

Journalists accompanying the American army documented the scene. The soldier’s name couldn’t be released, pending notification of next of kin, so Drew Middleton of The New York Times referred simply to “The Major of St. Lo.” A correspondent for the military newspaper Stars and Stripes called it “one of the truly heartwarming and emotional scenes of a gruesome and frightful war.” That correspondent was Andy Rooney, who later went onto fame with “60 Minutes.” In a speech years later, Rooney said “I guess there never was an American soldier more honored by what the people who loved him did for him after he died.”

Three-quarters of a century later, Howie’s name lives on. The Citadel has a Howie Bell Tower. The Virginia Women’s Institute for Leadership at Mary Baldwin University has a drill team named the Howie Rifles. Army Reserve Centers in Staunton and Greenwood, South Carolina, are named after him. And in Saint-Lô, there stands a monument to Howie. The French do not forget. Nor should we.

Something else happened on that July day 75 years ago. July 17 is the day when the death telegrams about D-Day started arriving back home in Bedford.