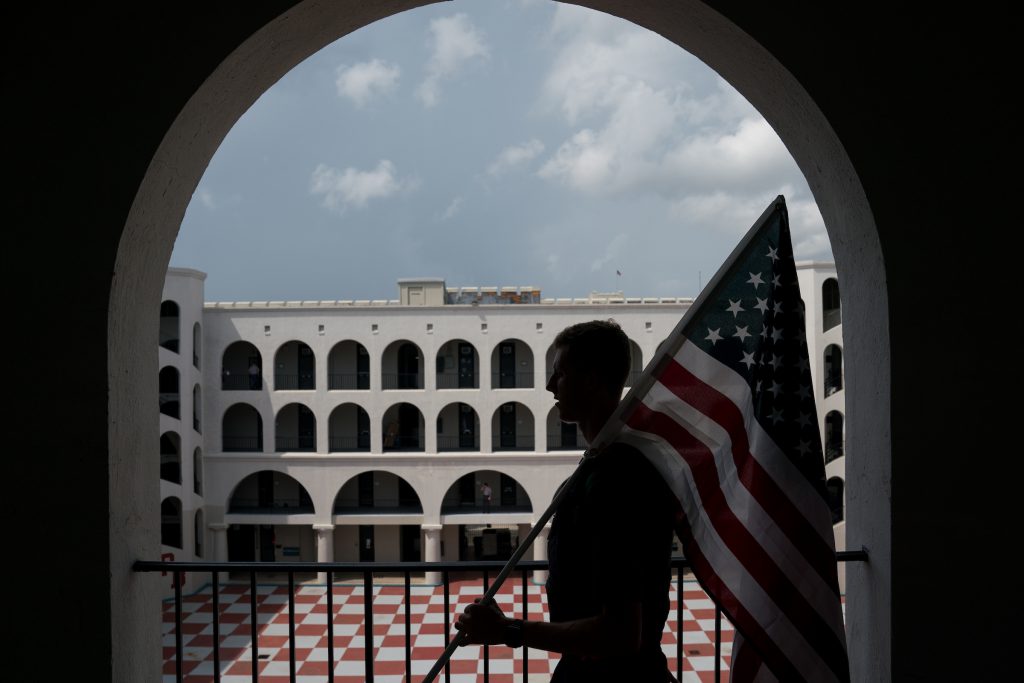 The South Carolina Corps of Cadets and other members of The Citadel family are taking part in numerous events and activities to honor the lives of Americans lost on September 11, 2001.

One of those Americans was Joseph John Pycior, Jr. who was killed while working at the Pentagon on 9/11. Pycior was a member of The Citadel Class of 1984 and his name is engraved on The Citadel War Memorial. In releasing the names of the missing in the fall of 2001, the Defense Department listed Pycior’s title as Aviation Warfare Systems Operator 1st Class.

Pycior was a son, a husband to Terri Pycior, and father to two sons, John, III and Robert Adam at the time of his death. He served in the U.S. Navy on numerous ships, including the including the U.S.S. George Washington and U.S.S. Seattle. During Desert Storm, he was stationed in the Persian Gulf. He began working at the Pentagon in 1999, according to reports.

Here are some of the ways The Citadel will remember.

On September 8, Sierra Company cadets hosted a group stair climb to mark the 20th anniversary of the 9/11 attack and also to recognize the sacrifices American troops made in Afghanistan.

The cadets, the Commandant of Cadets, the college chaplain and other members of the commandant’s team climbed 110 flights of stairs in unison in Stevens Barrack.

The climb was similar to what the National Fallen Firefighters Foundation supports, with firefighters in full gear climbing stairs in stadiums and buildings around America each 9/11 anniversary. The 110 flights represent the 110 floors of the Twin Towers.

“I think it’s important to honor the men, women and children who lost their lives that day, whether they were civilians or emergency responders. But it’s also the first 9/11 that we don’t have troops in Afghanistan. Honoring those who made the ultimate sacrifice there to defend the freedoms we have today is also very important. Climbing stairs is the least we can do.”

Members of The Citadel Republican Society cadet club, will place 2,996 small flags along the perimeter of Summerall Field on campus to recognize the lives lost on 9/11. Club participants will gather at 5:30 p.m. on Thursday, Sept. 9, at the Ring Statue to receive flags, and then span out to put the flags in place. The flags will remain there until Sept. 13. The club has provided this memorial for several years on campus.

About 50 cadets from 4th Battalion will attend the Travis Marion 9/11 Heroes Run on Daniel Island. The cadets will be carrying flags and supporting the race organizers and runners at all stages of the race. 4th Battalion has provided similar assistance for the race in years past.

Find out more about the run here.

Twin Towers remnant from 9/11 on display on campus

In addition to traditional Homecoming activates, the School of Humanities and Social Sciences (SHSS) — with support from the Fine Arts program — will exhibit a fragment of steel from the World Trade Center.

The SHSS received the fragment in 2013; it was displayed in the lobby of Capers Hall until it was relocated for the building’s demolition. A new, permanent location will be established when the new Capers Hall is complete.

At various times throughout the day on Sept. 11, Michael Varnadore, The Citadel Carillonist, will perform In Memoriam by John Courter live on the Thomas Dry Howie Carillon at The Citadel.

The Carillon is located near Summerall Chapel and close to The Citadel War Memorial. Though visitors are welcome to stand in the garden and at memorial during the concert, there here is no specific gathering area designated; the college hopes those on campus and in the nearby community will pause to listen and to reflect on the 20th anniversary of the tragedy.

Watch the National 9/11 Memorial and Museum’s #NeverForget video at this link.

Campus traffic alert for visitors due to construction

Everyone coming to campus should prepare for the following now through Monday, Sept. 13:

Thank you for your cooperation and patience.