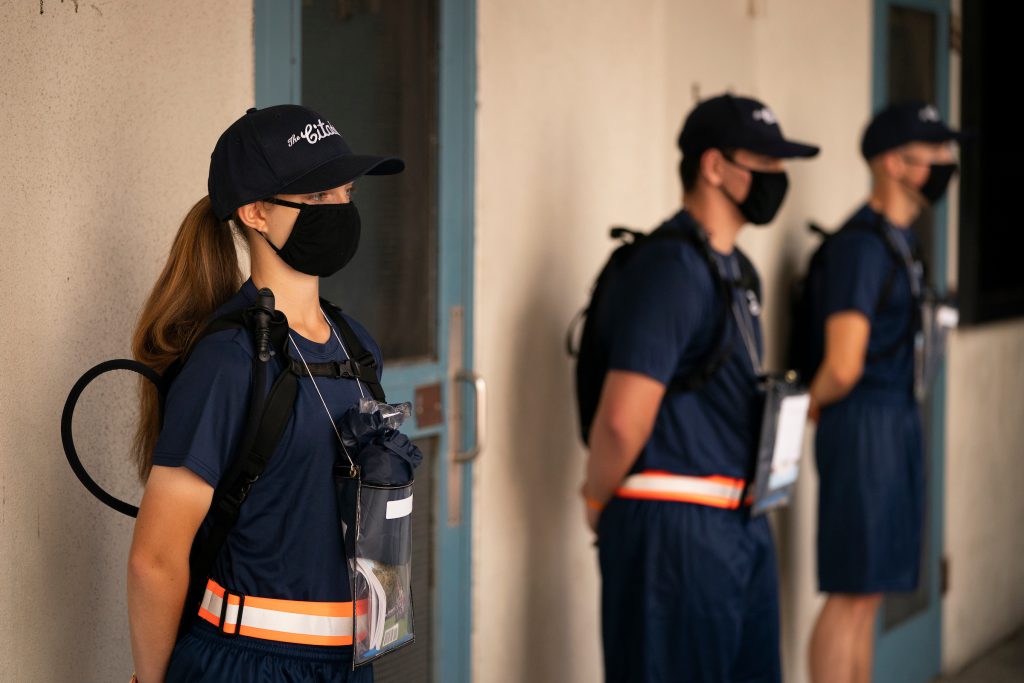 Photo above: Matriculation Day for the Class of 2024 at The Citadel in Charleston, South Carolina on Saturday, August 8, 2020.

Approximately 700 cadet recruits will come from around the U.S. and several foreign countries to matriculate at The Citadel on Saturday, August 14. The freshmen will begin arriving at 7:00 a.m., driving first to the Holliday Alumni Center (number 56 on the college’s virtual map) to pick up their company assignment packets before proceeding to their assigned barrack.

The college’s goal: providing the normal rigorous and exceptional freshman training experience for which The Citadel is known, based on pandemic conditions safety needs.

All freshmen and their visitors are highly encouraged to be vaccinated against COVID-19. The college’s faculty and staff have a 75% vaccination rate to date. Additionally, the college has purchased 11,000 facemasks, making them available for all who choose to wear them.

When reporting at the sallyport entrance of each barrack, freshmen will be asked the following by admissions staff if they have any COVID-19 symptoms. If they do, they will be guided to the infirmary for testing. If not, they proceed with check-in.

The Citadel Family Association will have parents of upper-class cadets volunteering. As is tradition, they will assist with moving the freshmen into their rooms. Parents of incoming cadet-recruits are also welcome to accompany their cadets to their rooms which are located on the 3rd and 4th floors of each of the five barracks.

All parents and visitors must be out of the barracks by 10 a.m. For more information on other opportunities for parents that morning, please visit The Citadel Family Portal.

The Citadel Class of 2025 at a glance
(These numbers could change slightly after Matriculation Day.)

The majority of the freshmen were likely born in 2003, which is the year the U.S. Department of Homeland Security began operating, Saddam Hussein was captured, the U.S. space shuttle Columbia crashed and Apple launched iTunes.

After three days of preliminary training and collecting the uniforms and materials they need to begin working towards becoming a cadet, the recruits will gather in the center of campus on Summerall Field as a class.

At 5:30 p.m. the freshmen, referred to as knobs or Fourth Class Cadets, will stand in formation to take The Citadel Cadet Oath. It will be shown via livestream on the college’s Facebook page.

When the knobs complete their rigorous cadet training in the spring, they will be formally recognized as cadets and will confirm their pledge to the South Carolina Corps of Cadets, which usually takes place in Marion Square on the Charleston peninsula.