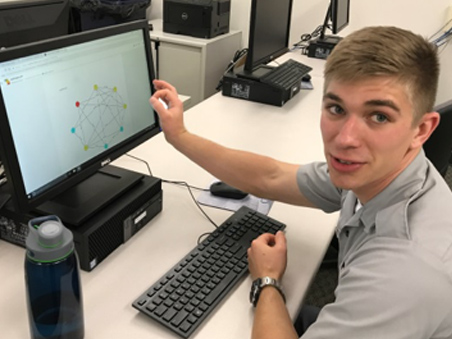 As seen in SC EPSCoR/IDeA

Dr. Shankar Banik, Mathematics and Computer Science at The Citadel, was one of our recent REU recipients for his project, “Ensuring Fairly Timed Network Communication.”

In this SC EPSCoR /IDeA REU funded research project at The Citadel, Cadet James Andrus proposed a remodel of the Delay-Variation Bounded Multicast Tree (DVBMT) problem. He referred to this problem as the Interval Multicast Subgraph (IMS) problem. IMS addresses the requirements of DVBMT, and reflects an interval of acceptable delay values for paths. This problem arises in collaborative and competitive applications where all the participants are expected to receive the message almost at the same time and before a specified period of time. For example, in an online game, if the move of a player is not viewed by all other players at the same time, fairness of the game cannot be ensured. By solving IMS rather than DVBMT, Cadet Andrus was able to find solutions for larger graphs more efficiently. He proposed Interval Multicast Algorithm (IMA) that uses an interval of acceptable delay as user input as well as ensures that a destination is not used as an intermediary for any path from the source to the destinations in the resulting multicast subgraph. This ensures that no malicious mishandling of a message can occur in competition applications between destinations. He provided proof of correctness and complexity of the proposed algorithm. He also analyzed performance of the proposed algorithm using simulation experiments.