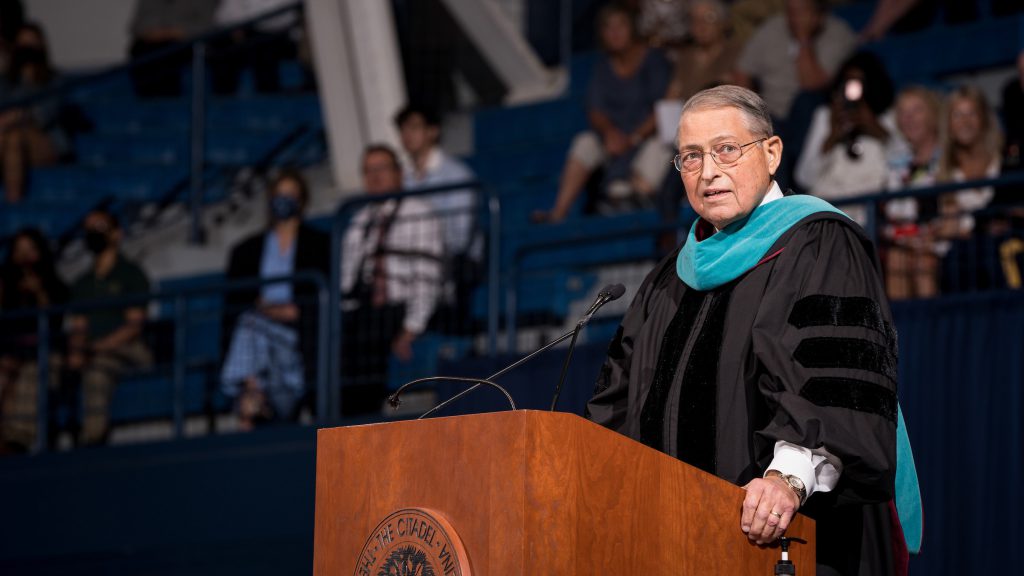 Photo above: Thomas “Tommy” Young III speaking as president-elect for The Citadel Alumni Association during The South Carolina Corps of Cadets Class of 2021 commencement ceremony on campus at McAlister Field House in Charleston, South Carolina on Saturday, May 8, 2021.

Obituary as seen on GreenvilleOnline.com

Tommy graduated from The Spartanburg Day School in 1970 and The Citadel, The Military College of South Carolina, in 1974. Tommy returned to Spartanburg after graduation and went to work with his father at Young Office Supply Company, which Tommy’s father and grandfather started. Under Tommy’s leadership and that of his son, Thomas, the company has grown to three locations, i.e., Spartanburg, Greenville and Asheville, and is now known as Young Office. Tommy loved his work and all of the many employees he worked with, including all former associates of Young Office.

Among his many achievements, Tommy was very proud to be the recipient of three special awards, the 2010 Neville Holcombe Distinguished Citizenship Award, given by the Spartanburg Area Chamber of Commerce, an Honorary Doctor of Public Service degree from the University of South Carolina in 2017 for his tireless efforts and leadership with many arts, education, health care and service organizations, and the South Carolina “Order of the Palmetto” presented by S.C. Governor Henry McMaster in 2019.

Tommy was a longtime member of First Presbyterian Church where he served as a Deacon and an Elder and assumed many volunteer roles. Anyone who knows Tommy knows that he loved life. He loved his church, his family, his business, his community and his “Citadel Bulldogs”.

Funeral services will be held at First Presbyterian Church at 11:00 AM on Friday, July 30, 2021, and conducted by Dr. Lewis F. Galloway and Reverend Joanne R. Hull.

Condolences may be expressed to the family at www.JMDunbar.com.

Remembrance at The Citadel War Memorial led by Assoc. of the U.S. Army and Brig. Gen. Dickinson, USA (Ret.), Class of 1967