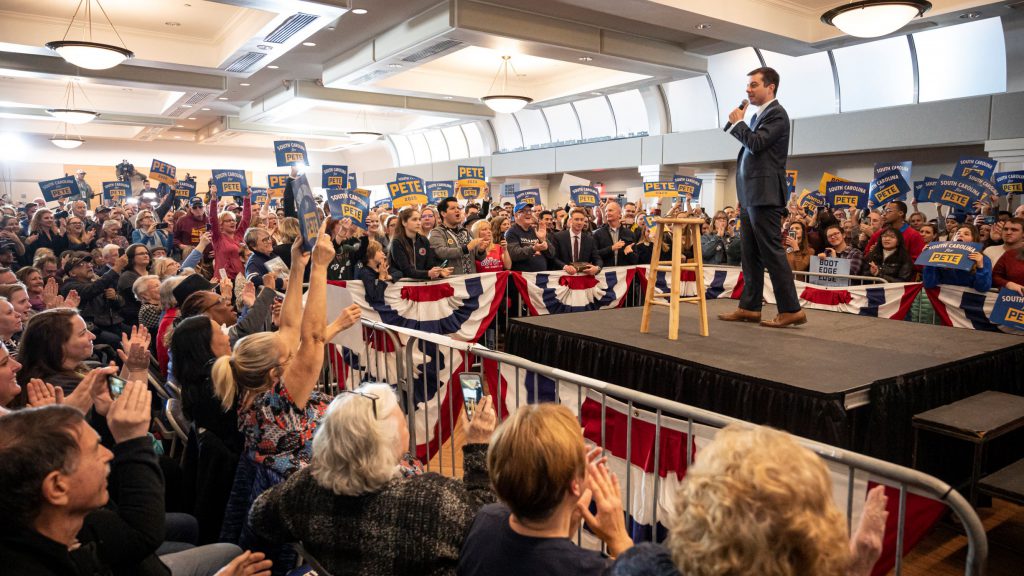 The Navy veteran and former mayor of South Bend, Indiana visited The Citadel just one day before the South Carolina Democratic primary election

The Pete for America team held a rally on Friday, Feb. 28 at the Holiday Alumni Center near The Citadel campus. A Citadel cadet, part of The Citadel College Democrats club, helped kick off the event and also read questions from the audience for Mayor Buttigieg.

These are some of the images from the event, captured by The Citadel photographer.

Former South Bend, Ind., Mayor Pete Buttigieg told a crowd in Charleston on Friday that he could be a cool, calm and collected leader to bring order back to the White House.

The closing pitch, delivered on the eve of South Carolina’s Democratic presidential primary, drew on Buttigieg’s military experience as a former U.S. Navy Reserve officer. He made a sharp comparison several times between his own typically unfazed manner and that of President Donald Trump, saying he thought angst over the president’s frequent tweets had become a nonpartisan issue.

Buttigieg asked the audience to imagine “turning on the TV, seeing the president and feeling your blood pressure go down a little bit instead of going up.”

He did not mention any of his Democratic rivals by name, despite running fifth in a recent Post and Courier-Change Research poll of likely South Carolina primary voters. Former Vice President Joe Biden has maintained a long-running lead in that and other recent surveys of the Palmetto State.

Buttigieg’s dings against the president came just hours before Trump was due to conduct his own rally in nearby North Charleston. He spoke at The Citadel’s Holliday Alumni Center, across the street from the military college’s campus, where Vice President Mike Pence spoke just over two weeks ago to the Corps of Cadets.

But Buttigieg said he would provide leadership the president lacked and would listen to expert advisers. He stressed the need for a leader who was secure enough to change course if necessary, including in unfolding situations like the spread of the novel coronavirus, or COVID-19, a respiratory ailment that has popped up globally in recent weeks after originating in China.

“When you have an issue like a virus that’s threatening lives and spreading around the world, don’t you want people around the president that will tell the president if things aren’t going quite right?” Buttigieg said.

A prominent Democratic presidential event hasn’t happened on The Citadel’s campus since a debate back in 2008, but a new student group was featured during Friday’s event: The Citadel College Democrats, a group of about 60 that started last year. Cadet Keyshawn Gascey asked Buttigieg a handful of questions from the crowd, on marijuana legalization and dealing with political division in the country, among other topics.

The Republican Society at the school bills itself as one of the biggest GOP clubs in the South, but sophomore cadet Ron Prince II, a co-president of the Democratic club, said the Democrats are starting out by working locally. They seek to flip state House seats around the Charleston region and reelect Rep. Joe Cunningham, a Democrat who represents South Carolina’s coastal 1st District.

In introducing Buttigieg, Charleston County Democratic Party Chairwoman Colleen Condon said Buttigieg would be the best person to bring down-ballot Democrats along in a presidential election, a claim that another presidential hopeful, Minnesota Sen. Amy Klobuchar, also made this week in Charleston.

But Condon argued that Buttigieg had a certain amount of political dazzle that inspired hope — even comparing him to fictional TV president Jed Bartlet of “The West Wing.” She also complimented his local government experience.

“It’s harder work than being in the U.S. Senate, some days, I tell you,” Condon said.