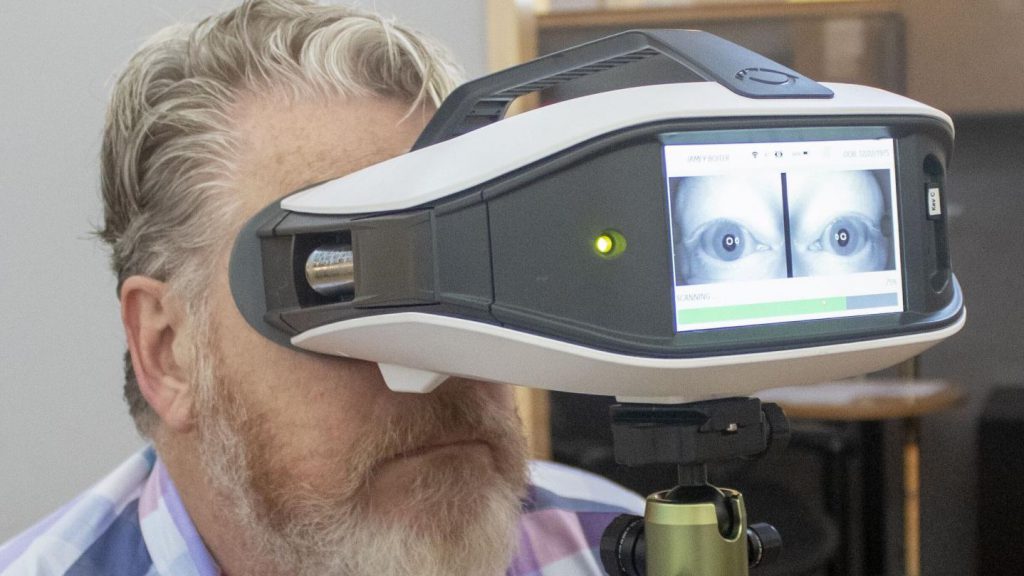 Note: Dena Garner, Ph.D., professor in the Department of Health and Human Performance and director of undergraduate research at The Citadel, helped collect the initial findings that led to the development, testing and commercializing of the technology.

As seen in EurekAlert!

The blink reflex activates when sensory or mechanical stimuli come into proximity to parts of the eye. These stimuli trigger certain nerves that send a signal through our brain and then back out telling us to blink. Ophthalmologists can use the blink reflex in the clinic to test for a variety of diseases that could cause these nerves or their communication to the brain to be damaged, and neurologists can use them to evaluate brain function.

To elicit the blink reflex, EyeStat delivers five light puffs of food-grade carbon dioxide at random intervals to the corner of the eyes over a 20-second time frame. During those 20 seconds, the device takes over 12,000 pictures to record the natural blink reflex. It specifically measures five things: the time it takes from the moment the air touches the side of the face until the eyelid on the stimulated side begins moving; the lag time between when the stimulated eye begins to move and the non-stimulated eye starts moving; how long the eye stays closed during a blink; the number of blinks immediately after the stimulus; and the distance between the place your eyelid sits when you are simply looking forward and when it is closed.

The FDA clearance enables blinktbi to market EyeStat as a means to measure and display the mechanically induced blink reflex, but not yet as a diagnostic device for particular clinical conditions.

However, blinktbi is currently researching whether the portable device could be used to clinically assess relevant changes in the blink reflex in patients subjectively diagnosed with traumatic brain injury on the playing field or the battlefield.

The idea of creating a more maneuverable device for measuring the blink reflex originated from Nancey Tsai, M.D., an assistant professor in the Department of Neurosurgery at MUSC. Tsai wanted to create a portable blink “Reflexometer” to measure the blink reflex of athletes on the sidelines during games to monitor for concussions. She worked with the Zucker Institute for Applied Neurosciences (ZIAN), a technology incubator embedded in MUSC, to take the first steps towards producing a research device that could eventually be commercialized by a company such as blinktbi.

ZIAN filed a patent on the idea back in 2013 and began to build a prototype, collaborating with Lt. Colonel Dena Garner, Ph.D., professor in the Department of Health and Human Performance and director of undergraduate research at The Citadel, to collect initial data. Garner’s promising findings led ZIAN next to license the rights to blinktbi to develop, test and eventually commercialize the technology.

“We built some devices that could do preliminary testing; however, they were large and had to be wheeled around on carts and had no use as an on-field device. Thus, they weren’t very practical,” said Mark Semler, co-inventor of the device and ZIAN chief executive officer. “Blinktbi was able to shrink the device down to a small portable device designed for sideline or clinic use. They also significantly expanded the research and testing and obtained FDA clearance for the EyeStat device.”

EyeStat is being sold to high school, collegiate and professional sports teams around the country to measure the mechanically induced blink reflex. These devices “in the field” are helping blinktbi to collect the data needed to assess whether the device can effectively diagnose concussion.

However, the research being done by blinktbi does not stop there, according to Fiorini. “We are also excited to say that now that we have FDA clearance for the blink reflex, we are beginning multiple studies looking at indications in a number of different fields,” said Fiorini. “These include testing for sobriety and early onset of neurological diseases, such as multiple sclerosis and Alzheimer’s disease.”

All of these applications require more study and each would require separate FDA Clearance.

But the recent limited indication for EyeStat for measuring the mechanically induced blink response is an important milestone for the technology. It enables the device to be sold and used for the first time outside of a research study. The approval is the culmination of work by its inventors, the scientists who tested it and the entrepreneurs who have worked to commercialize it. With the FDA approval, the device has cleared an important hurdle, meaning that an idea that began at MUSC is closer to benefitting the nation.

Health and Human PerformanceIn the News