United Nation Ambassador Nikki Haley appears to have been passed over for the job long-rumored to be her next political step: secretary of state.

But her supporters and politicos say the perceived snub could actually be more of a quiet endorsement of a job well done.

“Ambassador Nikki Haley’s political stock has never been higher. She has been the least controversial member of a mostly controversial Cabinet,” Haley’s former chief spokesman, Rob Godfrey, said Thursday. “The sky is the limit for Nikki Haley, it’s just a matter of what she wants to do.”

White House administration officials said Thursday that Mike Pompeo, the hard-charging conservative and current CIA director, will be the one getting the promotion amid growing talk that current Secretary of State Rex Tillerson is being replaced.

Haley — the former South Carolina governor who then-President elect Donald Trump picked for a Cabinet-level position 20 days before naming Tillerson as his choice for secretary of state — will remain at her post in New York. That comes after months of speculation she was the most likely to move up.

“She has a lot more independence than his direct administration by sitting in New York instead of sitting at the State Department in D.C.,” she said. “She’s a good public face for the administration. She’s a positive personality. She’s competent. And she can be very charming.”

The latest development corroborates what Haley has been saying for months: That she is content where she is at the United Nations.

When a reporter asked her in September whether she wanted to be secretary of state, Haley responded with a direct and terse, “No, I do not.”

Godfrey said this “laser-like focus” on the job at hand is what has brought his former boss continued political success.

“She focuses on being the very best at whatever job is in front of her. It’s an authenticity and devotion she has to the people who have entrusted her with a serious responsibility, and it’s why people have come to trust Nikki Haley as a leader,” Godfrey said.

Vinson said Haley shows signs of having more national ambitions in the future, arguing that her location now could better her odds.

In Congress, Haley also has support.

Speaking on the House floor Thursday, U.S. Rep. Joe Wilson, R-S.C., praised Haley’s response to North Korea’s latest nuclear test in which she said the action has brought the world “closer to war.”

“I support Ambassador Haley and President Donald Trump’s national security team, all of whom know that peace through strength is what it takes to keep American families safe,” Wilson said.

“Tillerson, much like the president, had no government experience prior to coming into office,” he said. “If any of the rumors are true, and it is Mike Pompeo, then it makes sense that the president might be looking to go in the other direction.”

“As far as I can tell, she’s only gotten rave reviews from almost everyone,” Buchanan said.

And for other South Carolinians in the administration, this week brought a promotion for another member of the state team. Former U.S. Rep. Mick Mulvaney, Trump’s White House budget director, was hand-picked by Trump to serve as acting director of the Consumer Financial Protection Bureau.

It is an organization Mulvaney once characterized in a 2014 interview with the Credit Union Times as “a joke.”

Replacing Tillerson was something many in Washington expected. Since taking the helm at the State Department, the former Exxon Mobil CEO has been at odds with Trump in several foreign policy areas. There was also the incident earlier this year when there were reports that Tillerson allegedly called Trump a “moron” in a Pentagon meeting.

The Associated Press contributed to this report. 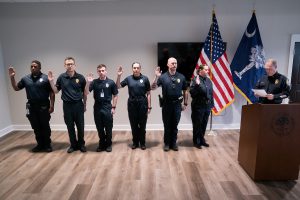