Pamela King served as buck sergeant in the United States Air Force from 1982-1989. She has been at The Citadel for almost four years. 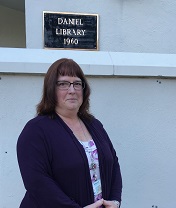 Why did you join the military? I didn’t really want to go to college and knew I needed a job when I graduated high school, and the military just seemed to be the way to go. My father was in the Air Force, my grandfather served in the Army in World War II. I also had a lot of uncles and cousins who served in the military, so it was like I was carrying on a family tradition.

What was the most defining moment during your service? I don’t think I can say there was one defining moment during my time in the Air Force. Every small milestone was important in my military career, from getting on the plane to go to basic training, to signing my reenlistment paperwork, to receiving my discharge. Everything that happened was a learning experience and contributed to making me who I am today. 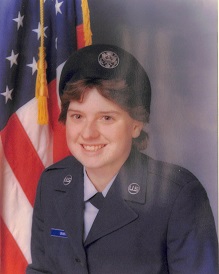 What does being a veteran mean you? This isn’t an easy question because most of the time I don’t think of myself as a veteran, since I only served for seven years. I know that I am, but so many others that have served in the military have given so much more of themselves than I did. When I do think about being a veteran it is more about what I feel about my time in the Air Force. I feel honored that I could serve my country, form friendships with my fellow airmen and still experience grief for the loss of some of those airmen. I’m proud that I was a part of something that was bigger than just me. I still feel sadness, even today, that there are people who just don’t understand what a military member and the families of military members give up to try and protect our country’s people and rights. Not everyone believes or feels the same thing in the military, some just see it as job or a way to get a college education.

Why did you choose to work at The Citadel? Almost every job I have had since leaving the Air Force has some tie to the military—from working at an elementary school for military children to working in military libraries, so it just seemed natural to apply for a job at a military college.

What leadership qualities did you learn in the military that have helped guide you through your career/life? I learned to listen to people. I learned that there is more than one way to do something. And importantly, I learned never ask someone to do something that you haven’t done or would not be willing to do.