Jenny Bramblett served for over two decades in the U.S. Air Force reaching the rank of major. Bramblett explains how her experience in the Air Force has influenced her work ethic and recently led her to working as executive secretary to the president. 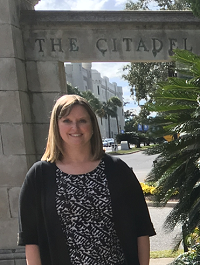 Current role at The Citadel and for how long? I am the executive secretary to the president, and I’ve been here nearly eight months.

Why did you join the military? From the age of 10, I set my sights on going into the Air Force after high school to follow in my dad’s footsteps. I knew I would be well taken care of because the Air Force would ensure I had a place to sleep, they would feed me well and teach me the skills that I could use to shape my career in the military.

What was the most defining moment during your service? I would have to rephrase this question to say, “What year was my defining moment?” In 2001, I was the first in my immediate family to earn a bachelor’s degree. I was enlisted at the time and made technical sergeant, so I went to Officer Training School (OTS) all in the same year.

Why was this so defining? I never thought when I was in high school that I would ever go to college, or earn a degree, for that matter. When I applied for OTS, I got accepted, but not for any of the jobs I applied for. Instead, I was assigned a job in logistics. It turns out that someone knew something I did not realize at the time—that I had a knack for logistics. I enjoyed a 10-year career as a logistics officer with various jobs from writing logistics war plans and conducting loading operations on the flight line to mentoring Afghanistan National Army logistics officers and sitting in as a temporary logistics squadron commander. 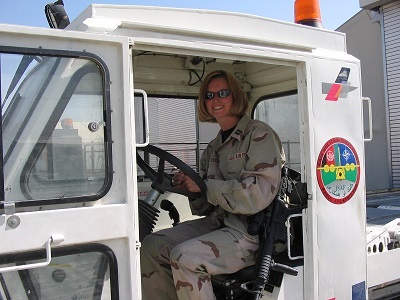 What does being a veteran mean you? Being a veteran means having taken pride in one’s country enough to serve and have been willing to sacrifice what it takes to defend it. It also means not to leave anyone behind and taking due care to bring our fallen back with dignity, respect and honor, as I had to do countless times while at Dover Air Force Base and other deployed locations. Sometimes, it means you have to face your fears and do what is important to keep the mission going or to help those brothers and sisters that need to be resupplied in the middle of the night. Also, it means being able to accept constant adjustments to your life, family, schedule and health.

Why did you choose to work at The Citadel? While in the Air Force, I worked for two commanding officers as their executive officer and always enjoyed the work. I wanted to work in a similar situation and The Citadel provided that opportunity for me.

What leadership qualities did you learn in the military that have helped guide you through your career/life? Always be on time and don’t make people wait. Also, do what you say you will do when you say you will do it. Lastly, I learned to live by the motto, “nothing ventured—nothing gained.”