No Stranger to Challenge 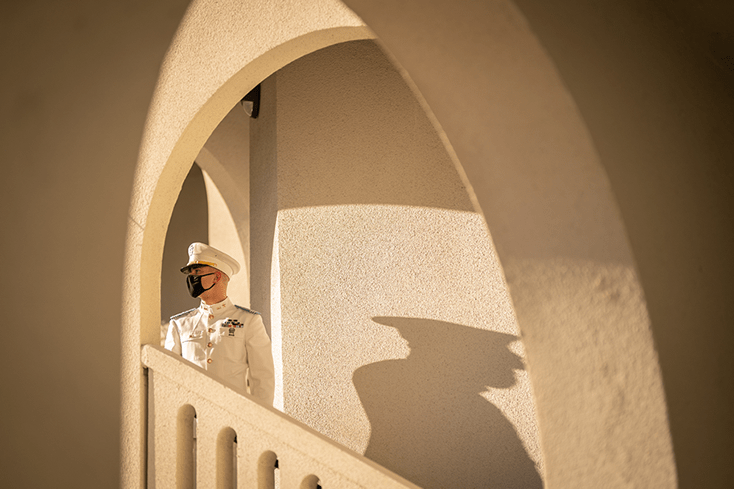 Nick Piacentini stood in formation on Summerall Field amid the other 2,300 cadets at the February 2018 parade listening to the cadet announcer read Dylan Graham’s MacArthur Award citation. Graham was the regimental commander, the top-ranking member of the Corps of Cadets, and Piacentini was an India Company freshman from Hollidaysburg, Pennsylvania.

“I remember hearing his accomplishments—it was this big accumulation, but it wasn’t just his accomplishments,” said Piacentini. “Everybody spoke so highly of him. He was smart, good at PT; he had every reason in the world to brag and be cocky and have a huge head, but he was just this humble guy. And I remember thinking, ‘That’s who I want to be.’”

Last March, as the Corps prepared to depart for spring break, Piacentini waited to hear the results of the rank board selection. When all of the other selected officers received emails, Piacentini started to second guess himself, but then he was called to the commandant’s office. Accompanying the commandant, retired Navy Capt. Geno Paluso, ’89, were 2020 Regimental Commander Cadet Ben Snyder and Regimental Executive Officer Brennen Zeigler. When Zeigler reached out to shake Piacentini’s hand first, Piacentini thought he was being named to the XO position.

“He shook my hand, and when he released it, there in my palm were the three diamonds—the regimental commander’s rank,” said Piacentini.

Paluso said something about the three diamonds that has stayed with Piacentini, especially as he navigates the challenges presented by COVID. “You will earn them every single day,” Piacentini remembers him saying.

Piacentini is no stranger to challenge. A Gold Star student, a member of Junior Sword Arch and the Summerall Guards, and a Navy contract cadet, Piacentini was attracted to The Citadel because it symbolized the pursuit of perfection and attention to detail. He liked being held to standards and trying to exceed them, and he liked the challenge The Citadel presented. And in October, he learned that he had earned a coveted slot to Basic Underwater Demolition SEAL training.

“COVID presents a lot of challenges. Everything we do is constantly reassessed to determine how we can do it in a socially distant manner, with masks on and with capacity limits in mind. Everything from matriculation day to classes; everything from daily formations to meetings, chapel and mess—every operation on campus is completely different based on our reassessment of how we can do it in accordance with COVID guidelines. And it’s been great,” said Piacentini, “because we’ve been able to try different things and realize that those things actually might work better in the future. But we’ve also been able to stay calm, take a step back to reassess and reprogram ourselves to do things a different way, not just how we have traditionally always done it.”

Piacentini’s work and that of the Corps has been tremendous. He’s had to be strategic and think in innovative ways. When other colleges were forced to go online, The Citadel has been able to keep cadets on campus to hold in-person classes and learn from the pandemic.

“COVID has forced me as a leader to constantly evaluate the situation and the risks involved—what’s the right thing to do versus what’s the popular thing to do. It’s prepared me to be a better leader—to tackle situations and issues head-on and not step back or cower because I don’t know the plan, or I’m not sure what’s going to happen in the future.”

Three years ago, when Piacentini vowed to follow in Graham’s footsteps, he never envisioned doing so with a mask on, and that’s made the job even harder, but in his characteristic style, with resilience balanced by humility, Piacentini has met the challenge head on. And that’s made all the difference.